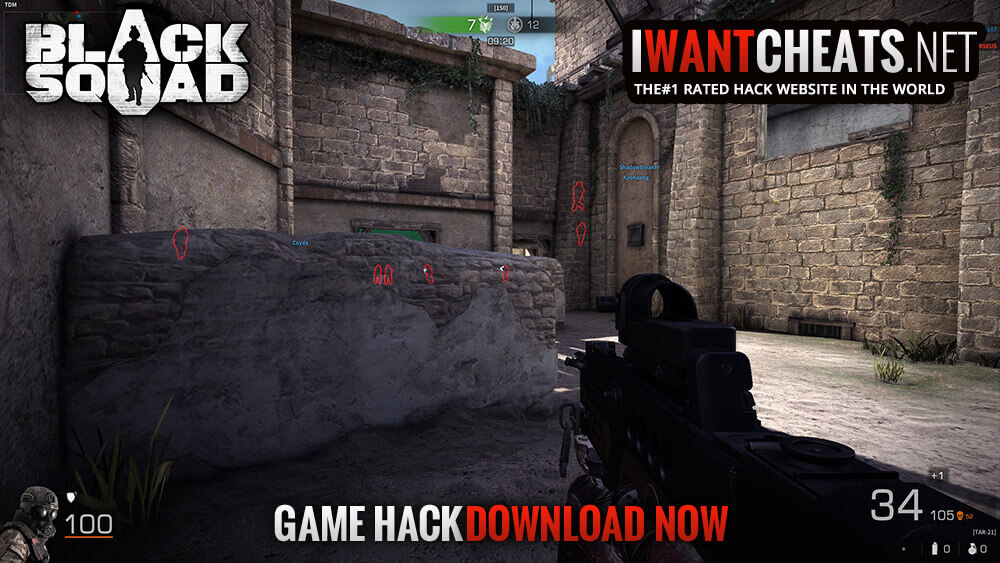 The IWC Black Squad Hacks is now online, and undetected by anti-cheat software in 2017. Locate every player with full character ESP (shown in the video below), win any round, and come in 1st place all the time, you will destroy every server with the IWantCheats Black Squad hack. If you don’t have Black Squad yet get it on Steam!

Get access now to the Black Squad cheat in just 3 minutes flat, it’s really that easy to sign up and download. Our team decided not to code any type of Black Squad aimbot for the game because it’s not needed, being able to see the enemy behind every wall gives you enough advantage to win and it really makes the game more fun.

Each player will start the round with a glowing red ESP color around him or her, anywhere they move to or go you can track them, aim early and take them down. Watch the Black Squad hacks video below and see the hack in action!

If you aren’t really into Black Squad you can check out the new PlayerUnknown’s Battlegrounds Cheat we just released, it’s our most popular game cheat right now. 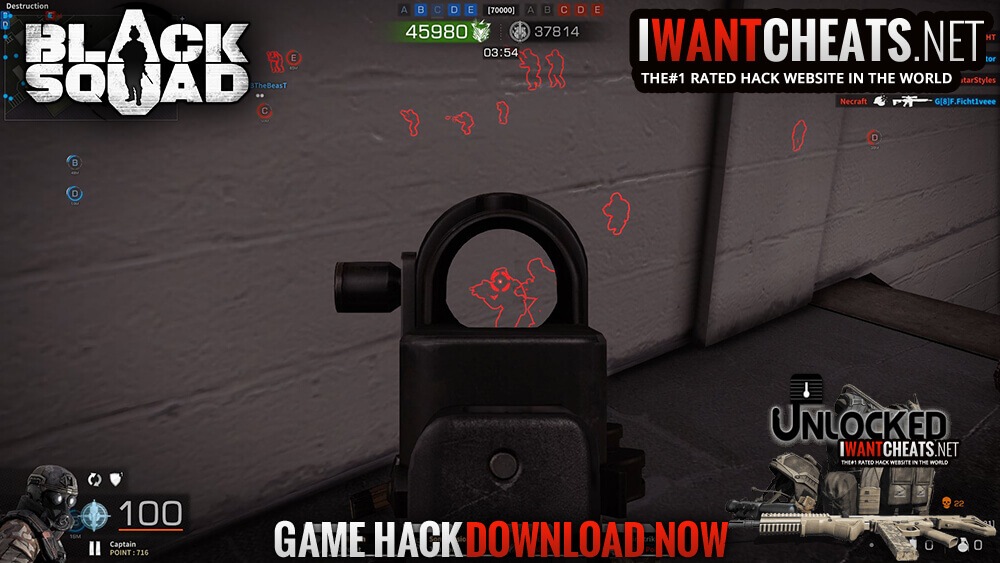 ESP
* Surround ESP for All Players: Our development team placed a glowing light around every player in Black Squad that helps you see them at all times on any map.

* Red ESP Glow on Outline: The enemy is displayed in bright red to help you spot the bad guys fast and aim before they even get to you.

* Wallhack to See behind Objects: Each player shows up behind every wall or objects no matter what they can’t hide!

Settings
* Nothing Needed Start & Play: Simply run the Black Squad Cheat and run the game it’s that easy to use.

Undetected
* Undetected by Anti-Cheat: The only Black Squad Hack site in the world that keeps you undetected while you play.

* Clean Screens & Videos: Screenshots and Videos won’t display the cheat if developers try to watch them or record you.

* Triple Layer Security: Our triple layer of security is included for everyone who signs up and becomes a VIP.

We created the Black Squad Hacks to help players have more fun and enjoy the game more, we add more excitement to every round and more fun for the individual player. Go view our fantastic article on how to use MW2 hacks.

With the Black Squad ESP Wallhack you can see the players at all times which helps with the following:

The Black Squad beta was released on July 28, 2017, and you can see from the screenshots below our cheat works great. 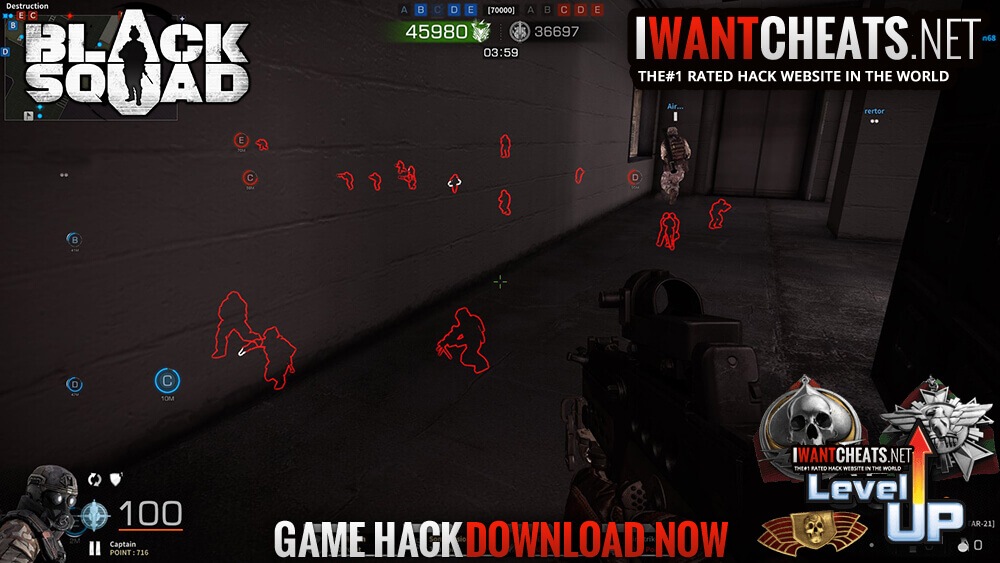 Our Black Squad Hacks show the enemy at all times.

WHY NOT RELEASE A BLACK SQUAD AIMBOT

Black Squad works perfectly with just the ESP Hack, if you put any type of aimbot in the game it ruins the game for every player. Black Squad also incorporates BattlEye for their anti-cheat code, if you check around other cheat sites offering Black Squad Hacks are “Invite Only” and they still end up getting everyone banned. When you use the ESP Hack and nothing more you’ll win every round and remain safe during gameplay.

When you read a Black Squad Review online you’ll find many comments complaining about aimbots and people getting 100 kills per round, shortly after that you’ll see other people tried hacks from other websites and then they all got banned. If you get banned playing Black Squad BattlEye will sometimes ban your IP and well your computer meaning you can never play again, so use the only UNDETECTED Black Squad Cheats in the world! You may also be interested to see our Warzone 2 hacks with aimbot included.

The Black Squad Screenshots below show you how you can see the enemy anywhere on any map played!

Published by Neowiz and developed by South Korean NS Studio, Black Squad is a 2017 Unreal Engine 3 modern military action PC game, released on July 28, 2017, for Microsoft Windows on Steam Early Access. The online FPS (First Person Shooter) game is inspired by lobby-based Korean shooter games, like AvA and Combat Arms. Previously, Black Squad was titled “Viper Circle” and released to the public in closed beta in 2013. However, later the development team was changed completely and remodeled the main theme of the game from a near-future setting to modern warfare.

Black Squad Storyline
It’s the battle between the Viper Circle (the terrorists) and the Peacemaker in this tactical shooting, modern military game. The Viper Circle is a dangerous organization involved in criminal activities to earn a profit and to put the threat at bay, Peacemaker (who have banded together from the United Nations) must stop them. You can play either side across some maps, using ten different game modes. You can rent your weapons using gold you earn in the game, which can be utilized in the battlefield or you can permanently unlock them using in-game medals, which you earn by completing daily and weekly challenges. 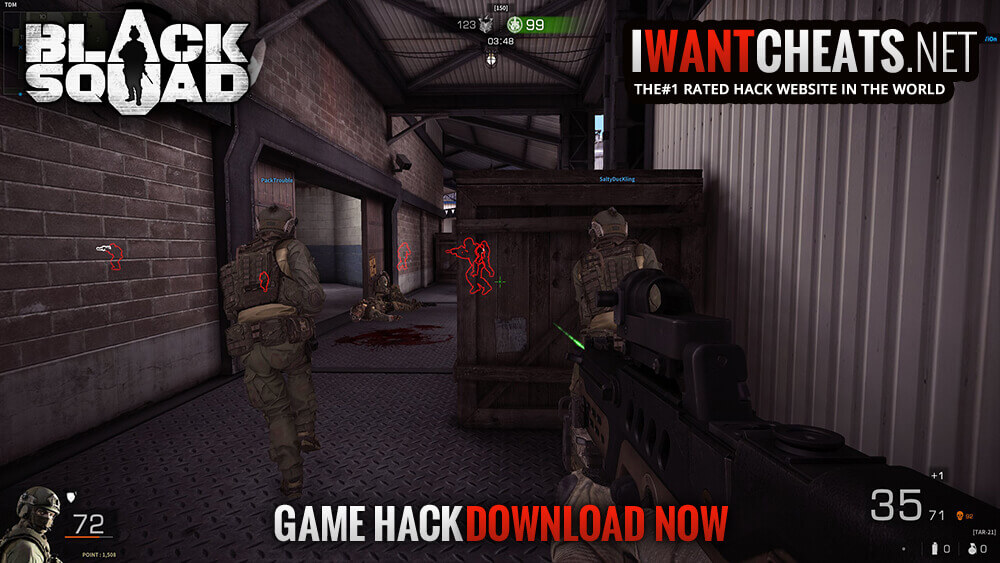 Other game modes which have been announced, but are yet to be released include:

Battle Match
In this match, each team has five points on the map designated with the letters from A to E. You will find a massive crate at each point, and the goal is to destroy all the crates of opponents before they can destroy yours, this is a 16 versus 16 set up. You can also ask for artillery, support, or an airstrike.

So you enjoyed watching the Black Squad Hack video and checking out all the information on the game? Now it’s time to register and download the hack and it will take you just a few minutes. Join 500,000 VIP members and become the new winner in every Black Squad game, Click Here to Register Now!