Full support added for Call of Duty Exo Zombies Expansion, check the hack out in action below. You can see all features on this page that we offer in the multiplayer hacks.

Do You Want Advanced Warfare Hacks?

Our Advanced Warfare Hack remains UNDETECTED while other cheat websites keep getting detected and losing CDKEYS for users. We were the first websites to release a hack for Advanced Warfare, and we have over 200 players currently subscribed to the cheat.

Our coder released the first Advanced Warfare cheat two hours before the game went live! You can Register and Download Instantly on our forum. Don’t forget to check out our new Modern Warfare Hack.

Our coder has over 8 years of experience making cheats for CoD based games and this new release for 2014 is no different. If you want to get instant access to our Call of Duty Advanced Warfare Hacks, then check out our online forums, register and you can download the hack instantly. 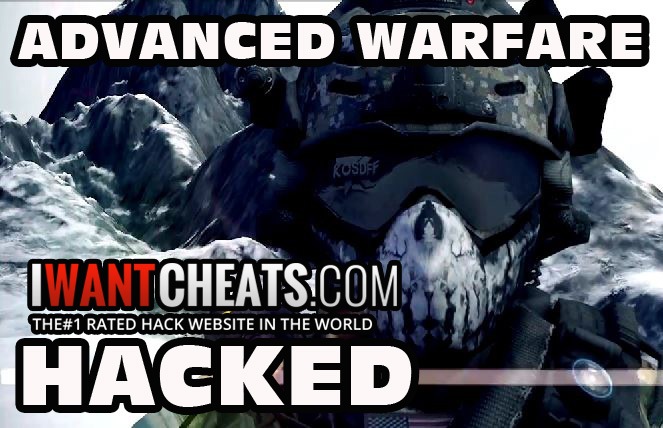 If you want to Download Free Advanced Warfare Hacks keep in mind we don’t offer those because it can get you banned quickly.

Our coder had the hacks out just a few hours before the game was released, so you can rank up fast and unlock all the weapons. Check out this image of our cheat menu in Advanced Warfare! 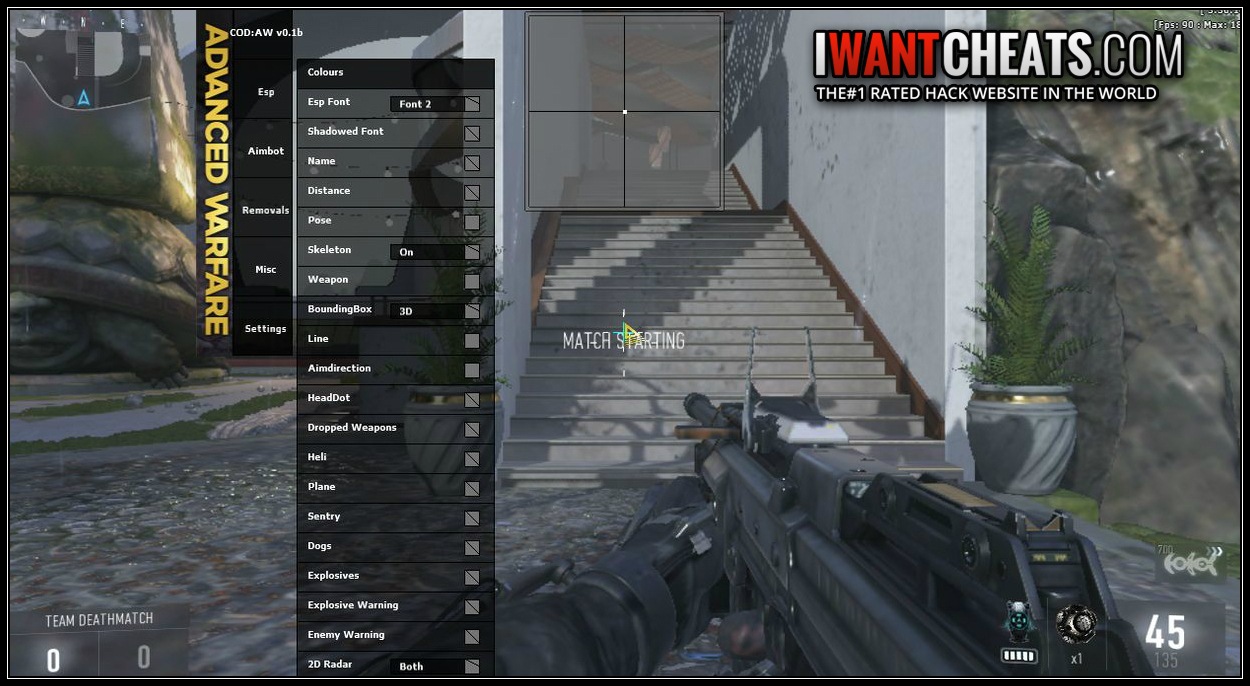 A server-sided anti-cheat program will be used in Advanced Warfare, but our driver and forum tips help you stay away from bans. Our last Hack release for Call of Duty Ghosts has never even had one ban, we hope to accomplish the same exact thing with CoDAW. 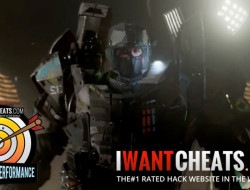 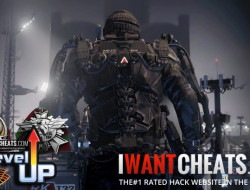 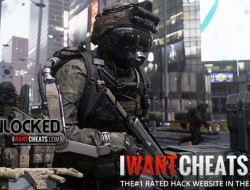 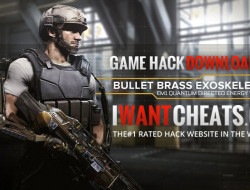 Current Hack Features Include the Following:

Advanced Warfare Aimbot
Autobot: Aimbot locks on and fires automatically for you
AimKey: Setup any key or mouse button to use the aimbot
Visibility Check: Only fires when the enemy is visible
Bone Scan: Checks and hits only the bone you set
Knife Bot: Will auto kill when the enemy gets close
Auto Switch: Changes to the next enemy
Auto Zoom: Bot will zoom for you on every enemy
Auto Prone: Bot will position you into prone to avoid hits
Field of View: Set the FOV to any settings you like
Human Aim: Make it look like you aren’t using hacks
Aim Speed: Select how fast the bot aims and kills
Aim at Exo: Make the bot aim and kill in Exo rounds

Glowing ESP
Colors: Select from 1000 different colors on every option
ESP Font: Select the font you like to use in each game
Shadow Font: Make the fonts have a shadow
Name: Show each Enemy name on the map
Distance to Player: Shows how far away the enemy is located
Pose: Display if the enemy is standing, in prone, etc
Skeleton: View the skeleton of each player
Weapon: See the weapons a player selected
Bounding Box: Display a 3D box around a player
Line” Draws a line from the enemy to you
HeadDot: Places a dot on the head of every enemy
Dropped Weapon: Shows you every weapon on the ground
Sentry: Displays all behind walls and everywhere on maps
EXO: Shows each Exo Unit on the map
Explosives: Shows all grenades and explosives

Removals
No Recoil: Makes it so guns don’t move when you fire them
No Spread: Makes every bullet hit dead center when fired

Bonus Features
Anti-AFK Bot: Keeps you online even if you leave the computer
Chat Spam: Tell everyone you are using our cheat and taunt them
DX11 Anti Aliasing: Make the game looks amazing even when using the hack
Draw Screen: Shows FPS, Time, Resolution, and Crosshairs

Our Call of Duty Advanced Warfare Hack Unlocks it All

iwantcheats are here to make your gaming experience more fun; with that said we provide the fastest experience on the planet to rank up. Using our CoDAW cheats allows you to win every match, get the most points, and unlock everything in the game super fast. That means you have all the best weapons and gear while other guys still are level 4 or lower.

Another great thing is we help you prestige faster so you don’t need to play for 400+ hours just to get that higher ranking on your profile. With our Call of Duty Advanced Warfare hacks, you can prestige in a day if you like. =)

Check out the video I posted below showing off the new super jumping, wall climbing and hoverbikes in Advanced Warfare, this should really change up the gameplay and make the game feel more like Crysis 2 IMO.

About Call of Duty Advanced Warfare 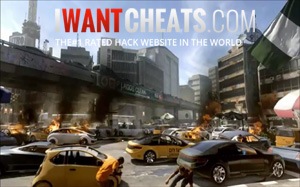 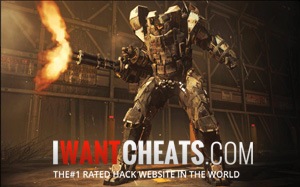 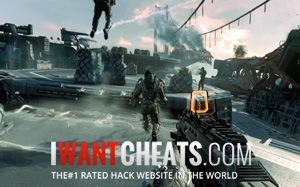 This first-person shooter video game is set in the future where American military dominance is a thing of the past. 2054 sees the unveiling of new battle armor, modeled along the lines of the exoskeleton spotted by ants and other crustaceans (I believe this is called biomimicry I think). This exoskeleton can turn any ordinary infantry into a colony of super-human soldiers, allowing you to do the following and more:

• Tear off vehicle doors, even when armored
• Carry massive amounts of items
• Climb buildings just like you are Superman

The new features introduced in this well-loved series are bound to keep you enthralled and creates a new and exciting pivot for the gameplay. Advanced Warfare does what it says, with futuristic weapons and gadgets galore. You will have access to a wide variety of new toys to play with as you battle for supremacy. The explosive has also been upgraded, with the ability to select from 3 types of grenade and much more!

You play the game through the eyes of Private Mitchell, a former US Marine now turn private military contractor operative. Working for the largest PMC in the world, Atlas, he decides to join after becoming frustrated by the United States’ failures at bringing democracy to all nations of the world. However, America has now lost its superpower status and the world belongs to PMCs led by Atlas. Owned by Jonathan Ross (played by Kevin Spacey), Atlas is the leading private military contractor carrying out military campaigns for the highest bidder. Wanting to do what America has failed to do and a shared belief in their cause, Mitchell and Ross team up to try and bring a sense of order to the world. They have two things going for them, the vast financial resources of Atlas and the most advanced military technology and hardware.

It becomes a bit difficult for players to expect new things from a title released on an annual basis. It must really keep the folks at Activision super busy trying to come up with new ideas to keep Call of Duty fresh and exciting. Does Call of Duty Advanced Warfare bring anything new or all the graphics and maps the same as previous games? Well, as the released trailers review there is quite a lot of new features and it actually shows since this game has been in development for nearly 3 years. Rebuilding the engine from scratch has given the developers more to play with, enhanced audio and upgraded graphics. Photorealistic graphics such as those seen in Avatar abound in Call f Duty Advanced Warfare making this a really visual gaming experience.

Only 3 maps have been revealed to date and the gameplay videos show that players are in for a rough and exciting ride.

BioLab
This level allows you to implement some of the new features Call of Duty Advanced Warfare provides. The objective for this level is to infiltrate a heavily guarded chemical facility to locate and prevent a potential chemical leak. Evading patrol soldiers and was made easy by using the invisibility function. It wouldn’t be advanced warfare without a firefight and so be prepared for some heavy exchanges as you head towards your objective. 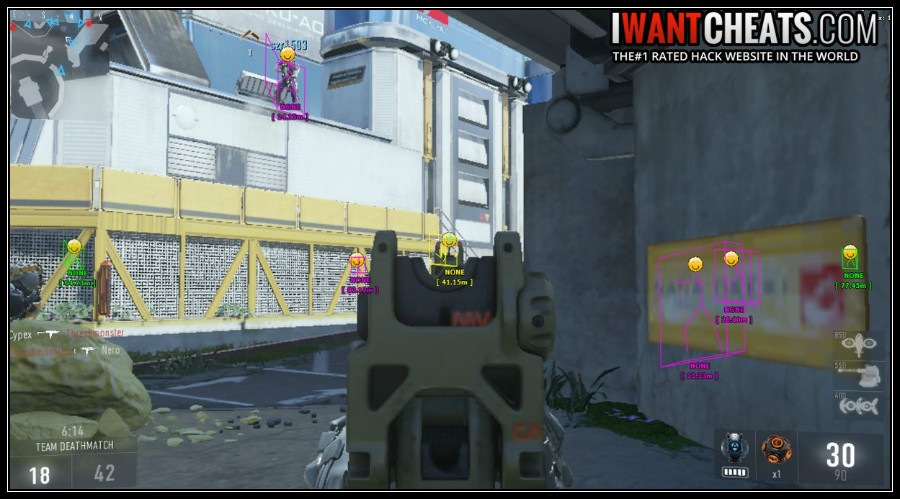 Induction
This is the level featured in the gameplay demos released so far and is based in the city of Seoul, South Korea. Gameplay features the majority of the hardware that’s been revealed to date. The mission is to destroy an enemy craft; you are a part of a team of marines and have to fight drone swarms, use your smart grenades, and the bullet brass exoskeleton to accomplish your goal. The key elements exposed in the trailer for this multi-player mode level are teamwork, skill, and a lot of action, which is what Call of Duty is best known for, as well as the stunning graphics.

Collapse
Experience utter chaos and mayhem on a high-speed street chase, set on the streets of San Francisco the chase reaches a deadlock on the Golden Gate Bridge. The objective is to stop the enemy from escaping across the bridge and hence a fierce firefight ensues. Enter the drone swarms which attach to the bridge tensioning cables and detonating. The bridge plunges into the depths of the river below and you have to find a way to survive. The exoskeleton is useful on this level and there is a scene where a player rips off a car door and uses it as a shield to protect against swarming drones. The gameplay is quite interesting and a good experience to be involved in bringing down the iconic gateway to San Francisco.

We wanted to include a few Call of Duty Advanced Warfare icons for anyone who wanted to use them, feel free to download and use them anywhere you want.

There is no doubt that Call of Duty Advanced Warfare is going to be loved, and hated, by some Call of Duty diehards. Exactly how that will swing will depend largely on the features yet to be revealed. One thing we are sure of, though, is that Sledgehammer Games and Activision have worked to take the Call of Duty franchise into unchartered territory. Billed as the “future of Call of Duty” this forthcoming release holds a hint of what the fans of COD can expect for the future.