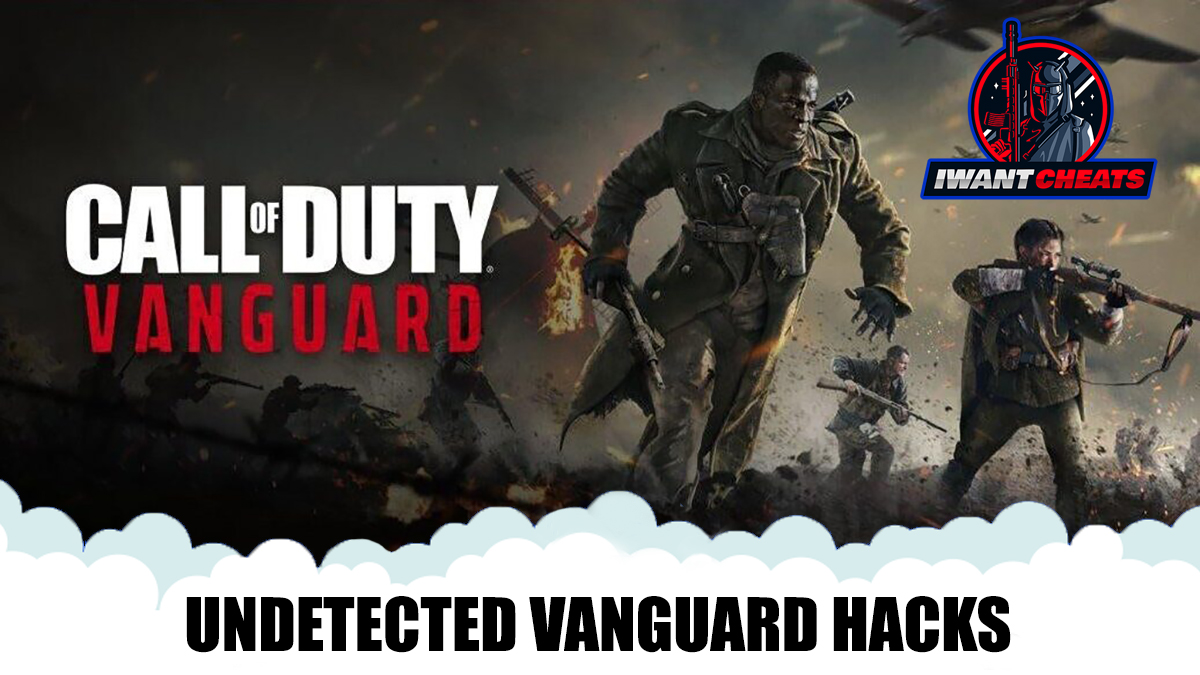 NOTICE: Our COD Vanguard Hack is finished! Just 2 Hours after the FULL GAME was released to the public!!

IWantCheats released the first ever Call of Duty Vanguard Hacks for the full game just HOURS after the release! Our team worked on testing the alpha and our game hack is live! Make sure you download COD Vanguard if you don’t have it yet.

Call of Duty has taken a less frequently used approach to tackling cheaters by creating its own anti-cheat program. This is in contrast with other game developers that are fine with using third party programs for such purposes.

Our new COD Vanguard Hack is just as good as our Warzone Cheats and all the features work with the new Warzone map releasing with Vanguard. Download the ONLY UNDETECTED aimbot hack for COD Vanguard!

We have been creating Call of Duty Hacks for over 15 years, and IWantCheats has never let a customer down. Stop worrying about getting banned while playing COD Vanguard because we do not use any detectable software!

Many players wonder why COD anti-cheat is necessary when EAC and BattlEye are both available over the counter. Activision has some good ideas behind implementing it, however: a new anti-cheat program means cheat makers have to adapt. Our development team played the Vanguard alpha and we already have a fully working hack.

Activision’s innovative COD anti-cheat solutions allowed the company to save money and develop new games. Although cheats were quickly developed, it was a temporary advantage as Activision continued developing its own solution that would give them advantages in future game releases while also saving time and resources on third party options. Get every major update on COD Vanguard by following the official Twitter page. 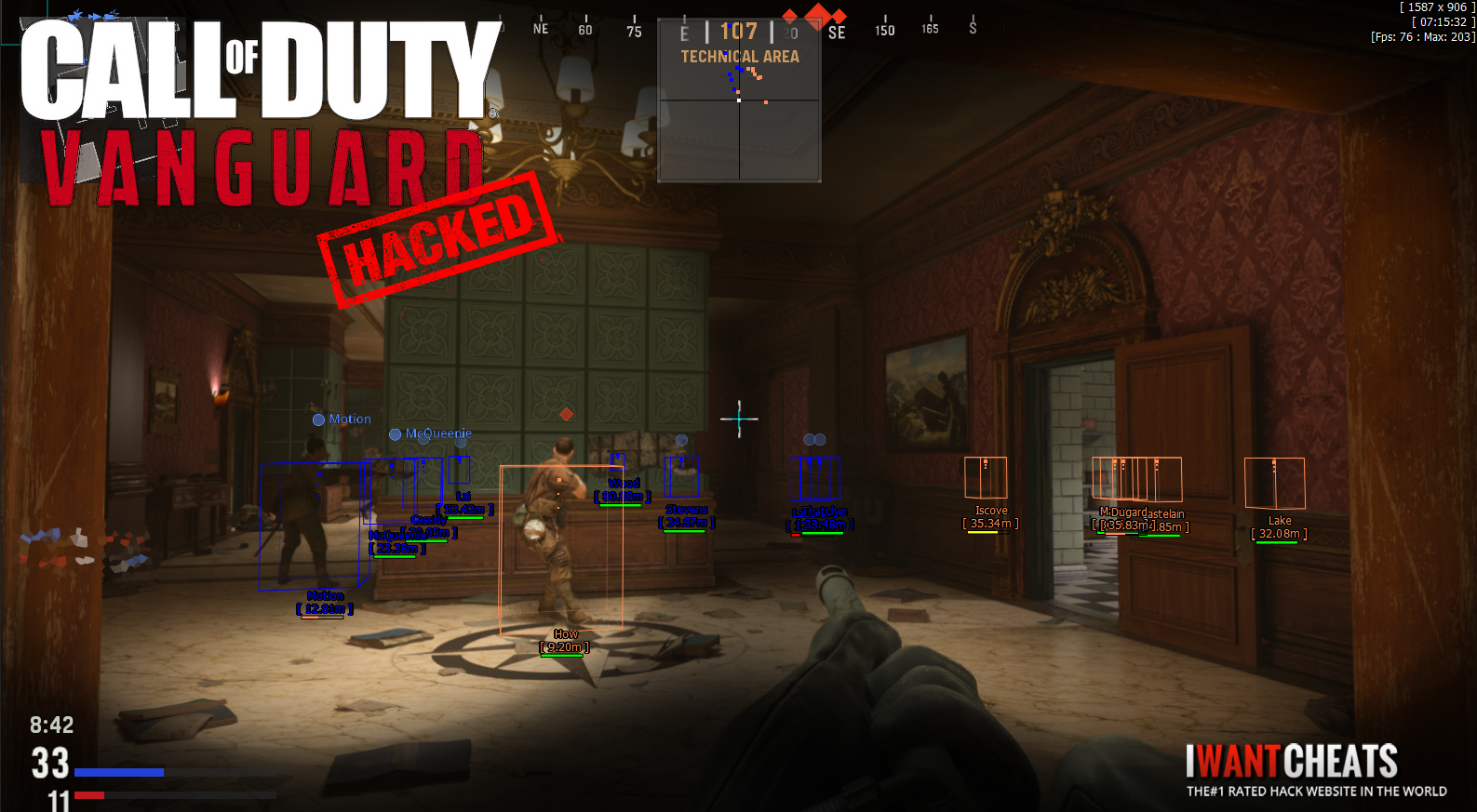 From a cost standpoint, Activision has realized long term savings from creating its own anti-cheat system for Call of Duty Black Ops 4. While the initial costs were high (it took three years and $4 million to create this in house solution), they are now saving money because they no longer need BattlEye or VAC subscriptions that many other developers pay when it comes to protecting their games against cheats online.

COD anti-cheat has had a pretty spotty history since it was first implemented. When the initial implementation came out, COD cheaters were able to circumvent this method and continue playing with their hacks in cheat mode. After an adjustment period of time where cheating continued happening at large scales, developers are still finding ways of detecting some forms of hacking today but have not been so successful recently as before when initially developed by Treyarch.

As of right now, there is no sign that the anti-cheat program will go away with Activision’s newest version of Call of Duty. In fact, it looks like they are planning to make their own system even bigger for this new game called Vanguard.

However, we are also confident that this will not last forever. Our developers have grown accustomed to working against COD anti-cheat and we’re sure that our team can circumvent it for the foreseeable future, barring any unexpected changes in their technology.

When playing online games with other players, you might be tempted to use hacks or cheats that will allow you to gain a competitive advantage. Before choosing any specific cheat code, it’s important for beginners to know what kind of skills they’re bringing in and how those skills can best work together for the game at hand.

There are many different ways to use cheats for COD Vanguard, and you have to decide what fits your playstyle best. Some players may feel more comfortable running around the map shooting people with a aimbot while others might prefer camping in one location on their favorite maps.

Some players may prefer having more information about their enemies and where they can expect to see them as this will make it a lot easier for you to avoid getting killed. Knowing where your enemies are coming from, either pre-aiming or preempting actions before an enemy arrives is the best way of avoiding being ganked by opponents.

We believe that there are two kinds of players in a first-person shooter like Call of Duty Vanguard. The first kind is the one who possesses enough mechanical skill to get by on sheer talent, so they don’t need map knowledge because their reflexes are strong enough for them to succeed without it. 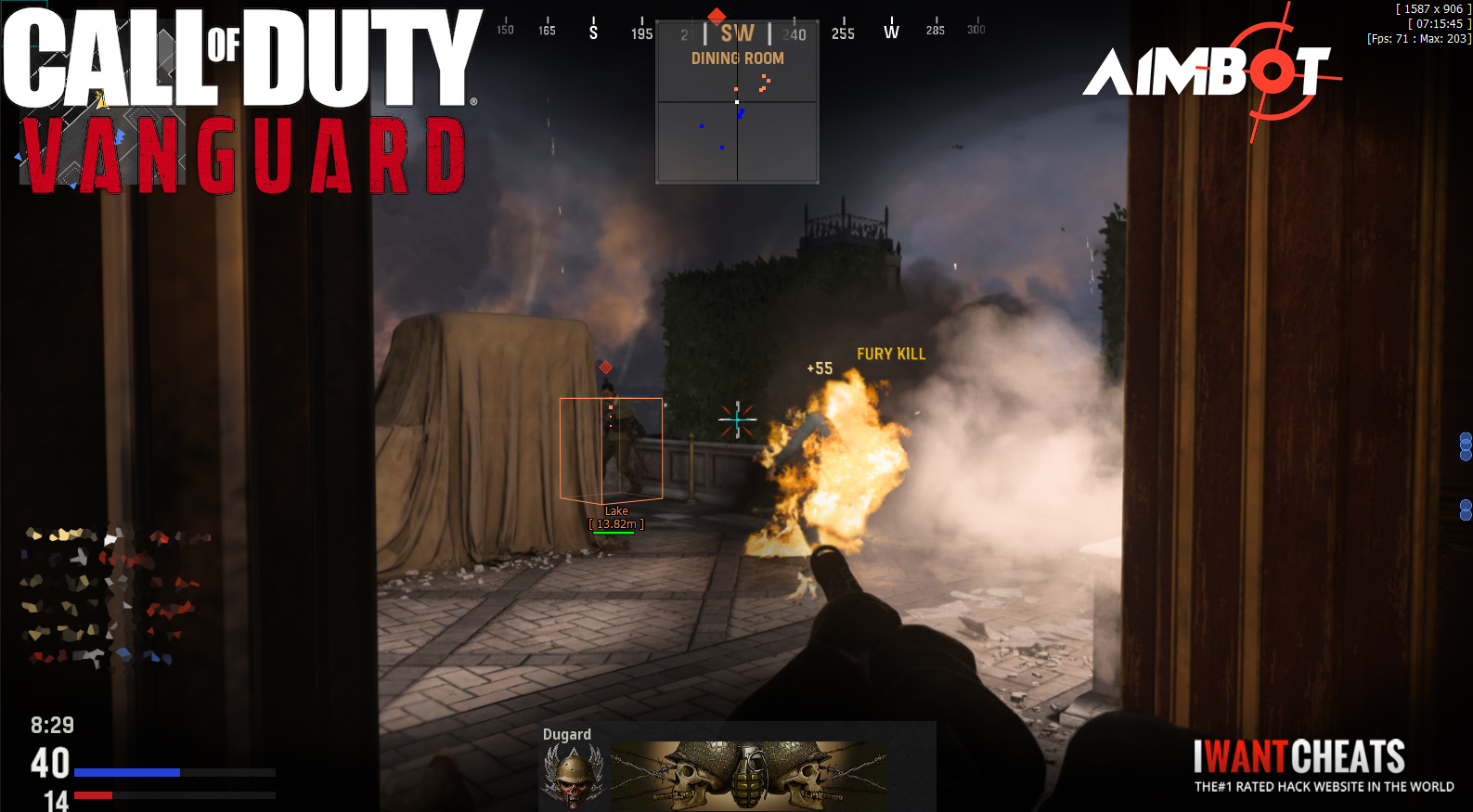 Opponents in Call of Duty rely on their skills to win. Knowing about how various weapons work and which ones are meta allows you to set up your loadouts so that you’re less likely getting beaten by opponents.

The best cheats for you depend on your individual strengths and weaknesses. If skill is an area in which a player has more difficulty, hacks can help to compensate by providing additional information about enemy locations.

Aimbots allow players who are well-acquainted with the game to catch up on mechanics and still win against those that don’t use it, since they can benefit from their knowledge of specific strategies.

The aimbot gathers your enemies’ physical location then uses that to lock onto them. This means you will still be locked on even if they move out of the way, essentially trapping you on target with no escape.

Why would anyone want to use an aimbot? Well, that’s because it can make you a better player at games like Counter-Strike. It analyzes the game and knows exactly where your opponents are so all you have to do is point in their direction for guaranteed hits.

Some aimbots can check friendlies and make sure there are no other enemies around before locking on. These are some older methods of making an aimbot appear realistic, but you still have the option to use advanced configuration options if needed.

Of course, aimbots have several limiting features to ensure that it isn’t quite as obvious that you’re cheating. For example, if your enemy moves behind cover and you can no longer see any of their hitboxes, the aimbot will automatically unlock from them so that it doesn’t look like you’re tracking them through walls.

If you want to be sneaky about it, set your aimbot’s sensitivity so that it doesn’t automatically snap onto targets. This will make your aiming look more natural and less human than the alternative of having a lower sensitivity.

The aimbot has an FOV setting that you should pay attention to, since it will determine the field of view (in degrees) your aimbot operates in. Most gamers keep their point at about 90 degrees because this ensures they won’t lock on targets outside their cone of vision which would look pretty suspect. Check out every piece of news on the game on Wikipedia. 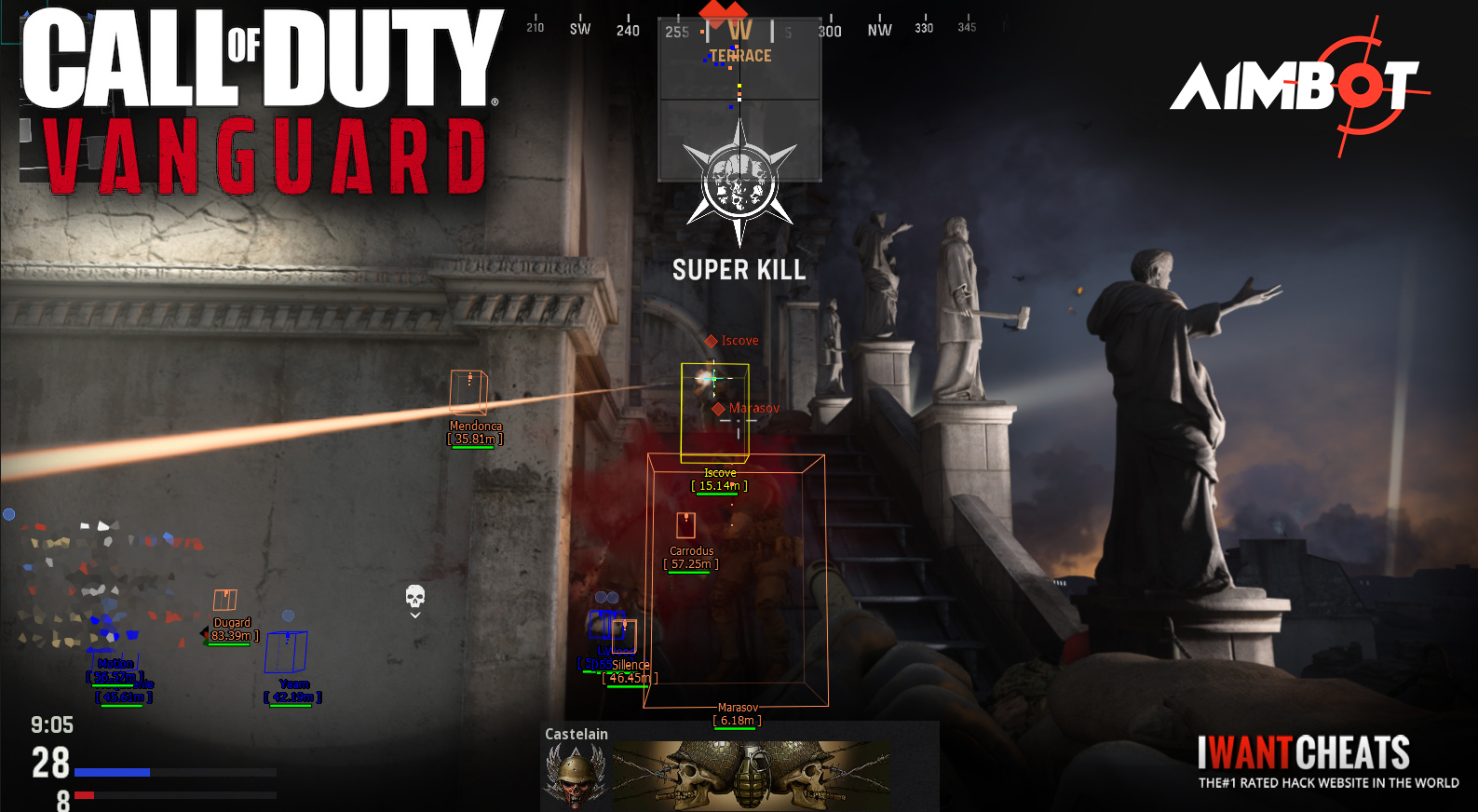 Nobody will ever suspect a thing if you set your aimbot to shoot for enemy torsos and rack up headshots. This way, not only do people think that you’re good at aiming (if they see the number of headshot trophies on your screen), but it’s also harder for them to actually tell what part of their body is getting hit by bullets because there are no blood splatters or other indicators when shooting center mass instead of heads.

How do ESPs work? They allow you to see through walls, depending on the options in your config menu. For example, some will show enemies with a glow behind them when they’re nearby.

The Call of Duty Vanguard ESP is a helpful cheat that provides you with all the information about enemies, allies, and items around the map. Some ESPs will even allow you to see where hidden objectives are so that players can gain an advantage over opponents in multiplayer matches.

Other ESPs will feature a skeletal representation of your enemy, allowing you to see their limbs and the direction they are moving in. Finally, some ESPs even allow you to see the hitboxes of your enemies so that you know exactly where to aim when someone is coming around the corner and they don’t know it!

You can see people complaining about our hack in Vanguard below.

This enables you to close in on the action for a more immersive gameplay experience. Many ESPs come with an adjustable distance setting that allows players to adjust how much information is presented as they play, which can help them better understand what’s happening around them without feeling overwhelmed by all of the info displayed at once.

To ensure your screen isn’t cluttered by enemies who can’t affect you, lower the distance at which your ESP operates. Toggle between what your ESP displays if some players don’t want to see their allies through it.

Finally, many ESPs will include detailed information about your target including their name, health remaining and even what kind of weapon they have equipped. This info can allow you to determine the most optimal engagement conditions in advance.

One of the best things about radar hacks is that you can customize them to an almost endless degree. You can change your enemies’ and allies’ icons, or even alter their color using RGB scale with some radar cheats.

Radar hacks are a lot like ESPs because they show you enemy and allied positions without having to get a killstreak. However, the difference is that radar cheats allow your map to be slightly different from what it actually looks like; some see enemies on an overlay placed over their HUD instead of directly in front of them as with normal minimaps.

You can also alter the size of your radar display, as well as its opacity so that you maintain a maximum level of situational awareness while keeping track on enemies around you. 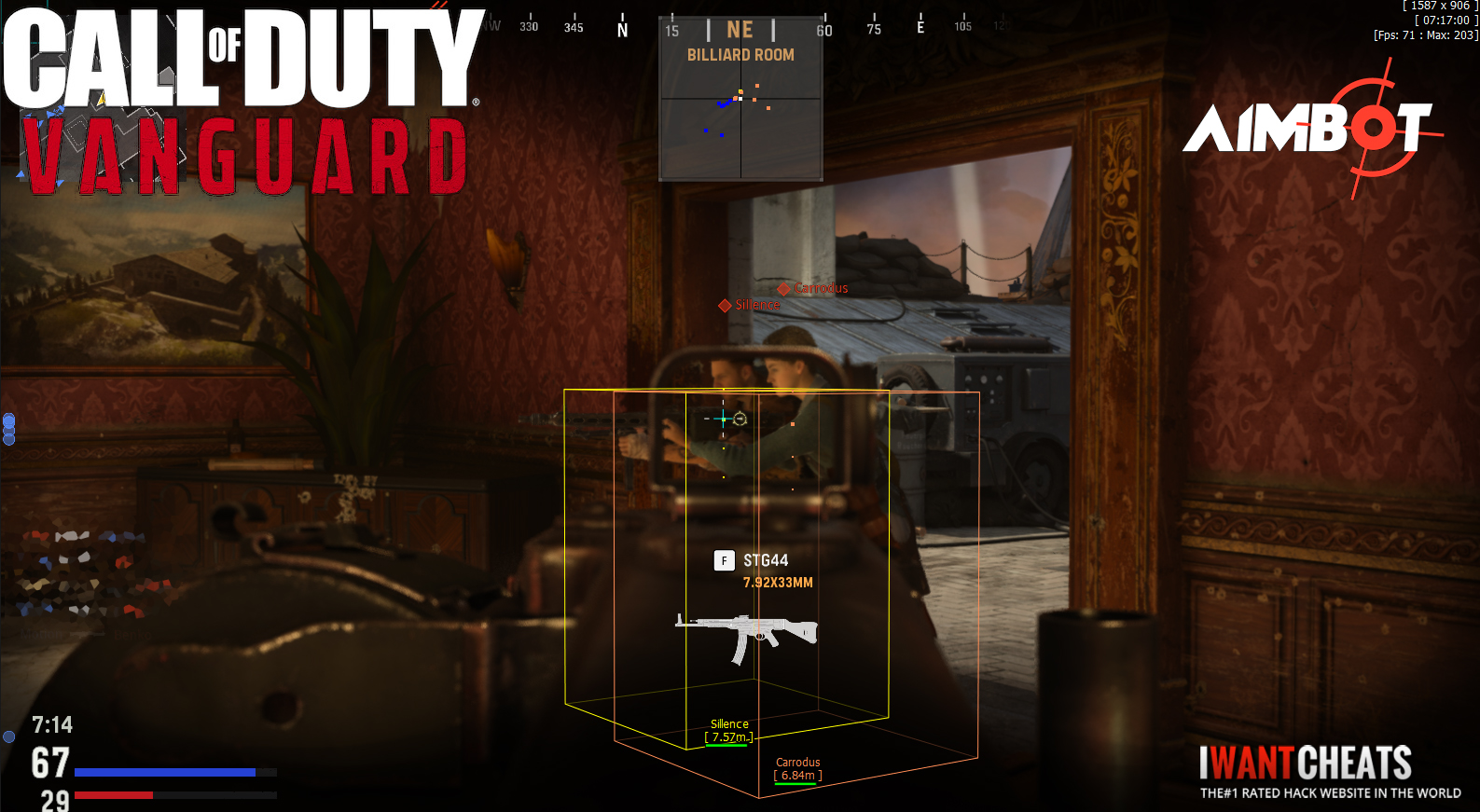 Why Do People Use Call of Duty Vanguard Hacks?

Aimbot users, or cheaters in online first-person shooter games like Call of Duty and Battlefield , love the feeling they get when they cheat because it gives them power over other players. Being able to gain an advantage without any opposition is every gamer’s dream so that’s why many people use a hack pack such as Vanguard which grants powers similar to those from God.

Cheating in games is like asking why the sky is blue. You’ll get a ton of different answers and perspectives, but there’s no definite answer for either one. The truth about cheating in gaming varies from person to person – some might do it because they’re addicted or think that their life will be better if they win more often while others become hackers out of sheer curiosity or frustration at being beaten by less talented players than themselves.

People play games for a variety of reasons, whether it’s to relieve stress or unwind after work. They enjoy the experience and don’t want anything to ruin their fun. Take advantage of hacks so you can fight enemies on an uneven playing field without worrying about losing every battle; this is one reason why people cheat in video game matches today!

Some people cheat because they want to push the limits of what’s possible in games. In most cases, Call of Duty does not allow gamers like me do things that are impossible but cheats make it easier for players with no aim and skill levels higher than mine can easily become better at this game by allowing them fly around without being shot or killed even once which is frustrating when you haven’t reached a level where these kinds of cheating tools work yet all your friends have managed to get there using hacks and other unfair advantages.

In COD Vanguard, you may want to cheat because it will show your friends that you’re better than them. If they call themselves “hardcore gamers” and make fun of your skills, then cheats can improve yours so much that you’ll be on the same level as them.