Our team has released the first Conan Exiles Hack for this amazingly popular open-world survival game.

Our game hack allows you to see every player in multiplayer using ESP code; we outline players with a colored box, so you never get surprised again.

We also detail and show you the locations of animals, items, etc. 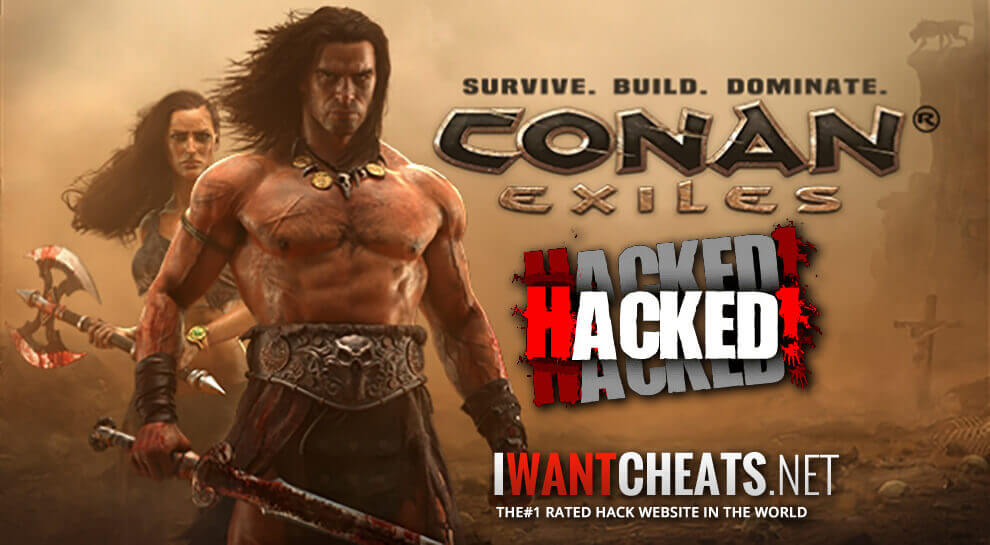 Can I Get Banned Using the Conan Exiles Hack?

Our coding team has one of the lowest ban rates per game of any hack site in the entire world; this means you can use the Conan Exiles Hack without having to worry about bans or losing the money you just paid for the game.

Are bans possible? Sure they are, but our detection rate per user base is less than 2%. If any updates with Conan Exiles get released, we immediately fix the hack and get it back online fast!

Do You Include a Conan Exiles Aimbot?

We are working on over 40 amazing features, and a Conan Exiles Aimbot will be incorporated in the full cheat.

When you encounter another enemy player, you can push the aimbot key, lock-on and kill them almost instantly.

You’ll rule the world of Conan because nobody will be able to kill you, except other VIP users from our site. 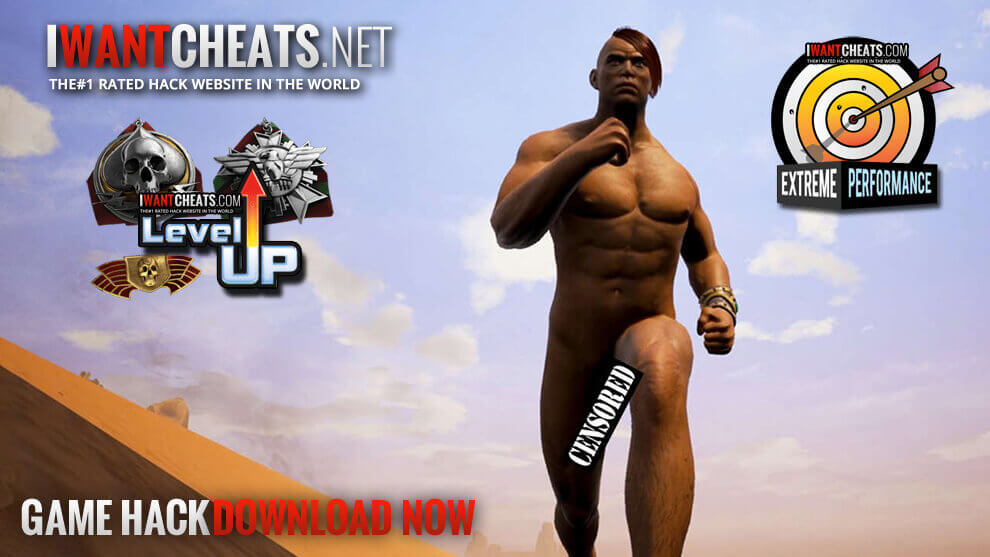 If you never tried using a site like IWantCheats you can follow the directions below and get signed up and using our Conan Exiles Cheat in a matter of minutes.

You’ll find that cheating in games helps you play better, rank up faster, win more, and enjoy playing longer because you’ll always seem like an elite player that has hundreds of hours of game time. 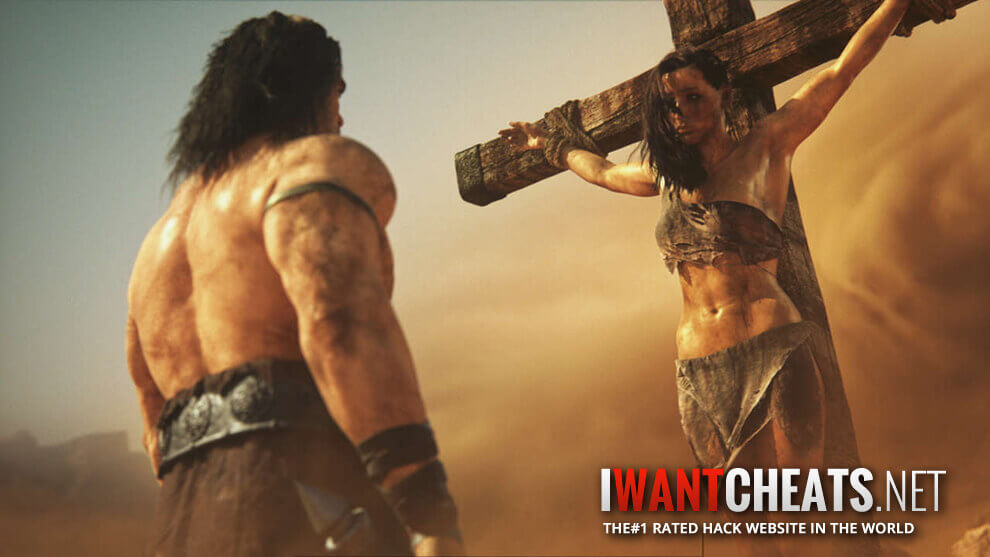 Conan Exiles Review
Conan Exiles is an open-world survival game developed and published by Funcom – the minds behind the development of Age of Conan built on Unreal Engine 4, the early access version was made available on January 31, 2017, at a price of $29.99. Its release was anticipated in September 2016, however, due to undisclosed reasons, the launch date has been pushed to the second quarter of 2018. But you can still try it out right now, considering it went up for early access to the Steam store.

The developers have talked about how Conan Exiles is different than other Sandbox games. It takes players to a different dimensional world, which is full of history. It has received an overwhelming response and is the second best-selling game on the Steam store right now. It has successfully penetrated the top 10 charts for most played games on Steam.

Background to The Story
The trailer explicitly says “Survive. Build. Dominate”. Just like most Sandbox games, Conan Exiles’ primary objective is survival. The game is set in the savage universe of Conan The Barbarian. Primarily, all the gameplay relates to Conan’s stories.

The main character (i.e. the one that the player controls) is in exile, just like thousands of other outcasts. The player has to survive among his rivals, whose primary focus is also survival. You fight and ultimately gain authority over others.

The game is set in Hyboria, i.e. Conan the Barbarian’s world. You can roam around and discover locations and ‘people’ throughout the map. 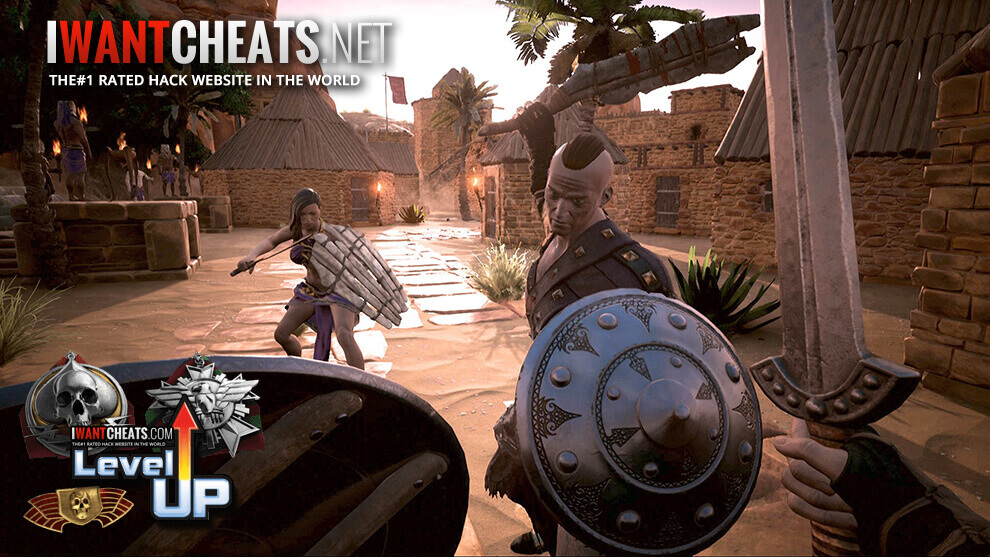 Interesting features
The game’s idea is almost like Minecraft’s survival mode in which we need to grow crops or hunt animals for nourishment. Another thing which is somewhat common between the two games is rivals. In Minecraft, ‘monsters’ only come out during night time, while in the game under review, your opponents will be coming back at you all the time!

You must build a shelter for yourself. Additionally, you may utilize tools to assemble weapons. Oh and there’s this amusing feature which lets players sacrifice enemy players on the Gods’ Altars to gain the favor of the Wrath of Heavens!

Prepare for some fast and bloody combats! You can cut off the head or the arms of your rival! How satisfying!! With your enemies, out of the way, you may proudly announce that you dominate the exiled territories!

Gameplay
The game allows players to customize their characters on startup. You can determine the character’s gender, ethnicity, physical features such as complexion, etc., using sliders. Oh and, you can modify the character’s genitals as well.

Owing to full nudity feature, you can customize your character’s genitals to the size you prefer. The same goes for female breasts, which can be tailored to meet your likings. Funcom has taken the next step by pushing a lot of realistic factors into the game.

For players with somewhat moral complications, nudity can be partially or entirely disabled too. It feels very spontaneous to create your character; neither too hard nor too dull. You are human, and you are going to look like one!

Okay, so how many of you have played ARK? Conan Exiles roughly have the same features as available in ARK. 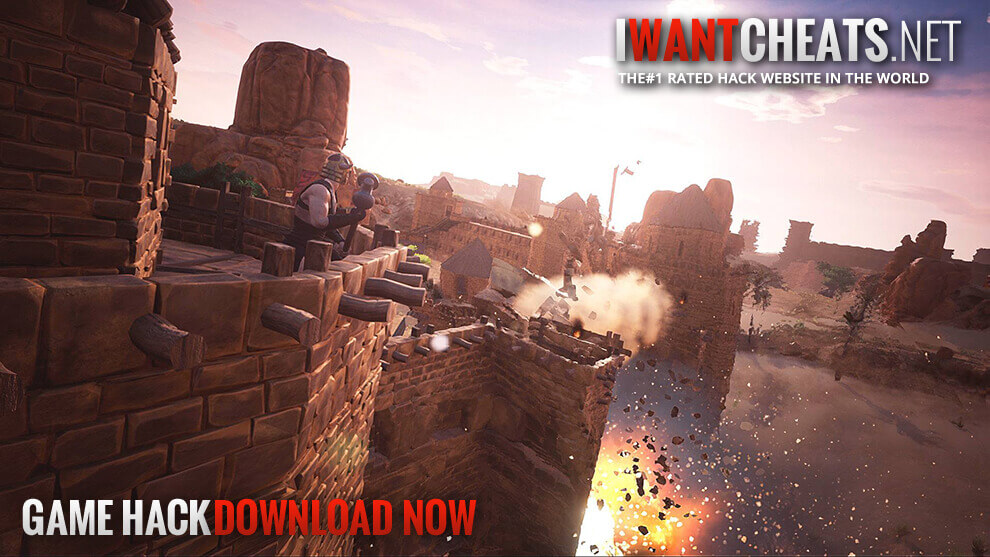 Considering both games use the same engine (UE4), it’s safe to say they’re almost identical. However, most players term Conan Exiles more exciting and user-friendly. Moreover, Conan Exiles lets players modify the foundations, build into mountainsides, and use the terrain too, which is not possible in ARK.

Although Conan Exiles resembles most survival games, with the typical hunger, health, and stamina maintenance requirements, there are some features that set it apart from its competitors. For example, if you carry more matter (tools etc.) while moving around, your stamina takes longer (than usual) to build up. In turn, this affects how long you will be able to run!

The fighting mechanism resembles Skyrim in a manner, considering you get to use the weapons of your liking to strike your enemies and stuff.

The Ability to Enslave NPCs
Considering the game resembles ARK’s feature of the capacity to tame dinosaurs, but anyhow. Many players have given thumbs up to this feature.

Sources are claiming that devs also intend to introduce the capability to tame animals, and ride them, this is expected to come in one of the many patches that are being released on a daily basis, or when the full game is made available to the public.

The capacity of capturing an NPC is a new initiative in this particular genre since no other survival game lets players capture human NPCs. Once an NPC is captured, it can be forced to do any task you want it to do!

As of now, the thrall system lets you bring an NPC back to your camp after capturing him, and then you can spin him around in the Wheel Of Pain. Although it takes up a considerable amount of time, all this is worth it once done!

There are NPCs with special capabilities, which you must look for so that they can ‘serve’ in your desired role! They can be fighters, blacksmiths, chefs, archers, etc. 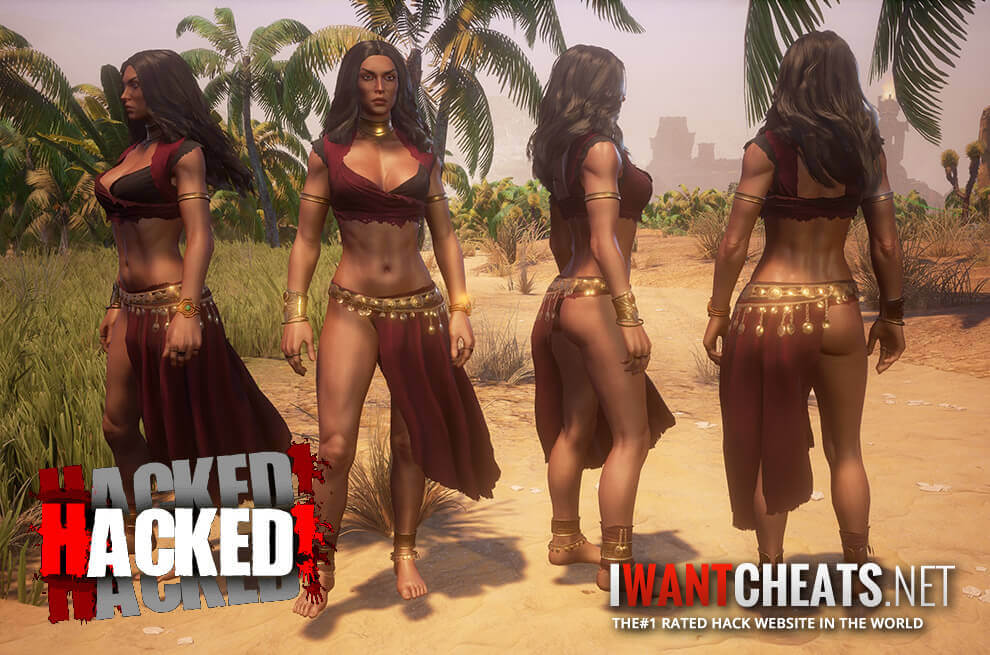 The most interesting NPC, however, is the ‘dancer.’
Since the cruel world of Hyboria is filled with dark magic and deadly enemies, your character can get ‘Corrupt,’ thanks to a unique mechanism called Corruption (duh).

Corruption is an effect in the game, which significantly affects your stamina and health (shown in the upper left corner of the user interface). However, corruption can only be a problem in some regions of the map such as caves.

You can cure corruption by watching dancers do their magic! Although more cures might be added by devs over time, this is currently the only one.

Problems and Community Suggestions
Even though the game is in its early access stage right now, with the devs always working to eradicate the minute glitches and bugs, here are some of the most commonly faced issues reported by players.

The game currently lacks a detailed system. For example, even though you can try to dodge enemy attacks, it doesn’t feel as smooth as it should right now. Referencing the dev’s statement that every body part can be cut, the feature doesn’t work that well right now, considering many players have complained about the inability to decapitate ‘certain’ body parts.

One more thing which is being widely demanded by players is the ability to cut off or damage another player’s arms or legs so that he/she cannot use his/her weapon or chase others. Furthermore, a widely-reported issue is that shooting enemies with arrows doesn’t seem to do anything. Rather, they keep on running as nothing happened!

One of the games most frowned upon issue is the unavailability of some AI in NPCs. As mentioned in the above paragraph, NPCs simply stand around and only move when they try to attack you, this gives the game an awkward robotic touch, something not appreciated in survival games.

The biggest problem is the ping issue. Almost all the community has complained about the somewhat pathetic servers.

Although it should be understood by gamers that the game is only in its early access stage right now, their cry is quite justified, considering the devs are charging around $30 for early access. But, don’t worry.

Funcom is always working to eradicate the issues. They recently terminated their partnership with their server partner, PingPerfect, because they were ‘unable to deliver the level of service required.’ Funcom will soon get official servers back, once they find suitable hosts.

Furthermore, another thing that might be causing the server issue is the dev’s (somewhat) carelessness, they didn’t expect such a positive response from gamers, and this must have overwhelmed their partner.

Whatever religion you choose to follow, you get some basic items/perks. However, one thing is common in all faiths; you must gain the favor of God!

As you level up, you get to upgrade your religion’s shrine/altar. There are currently two levels/tiers to which the monument can be updated, excluding the original one, which totals it to three levels of holy places! 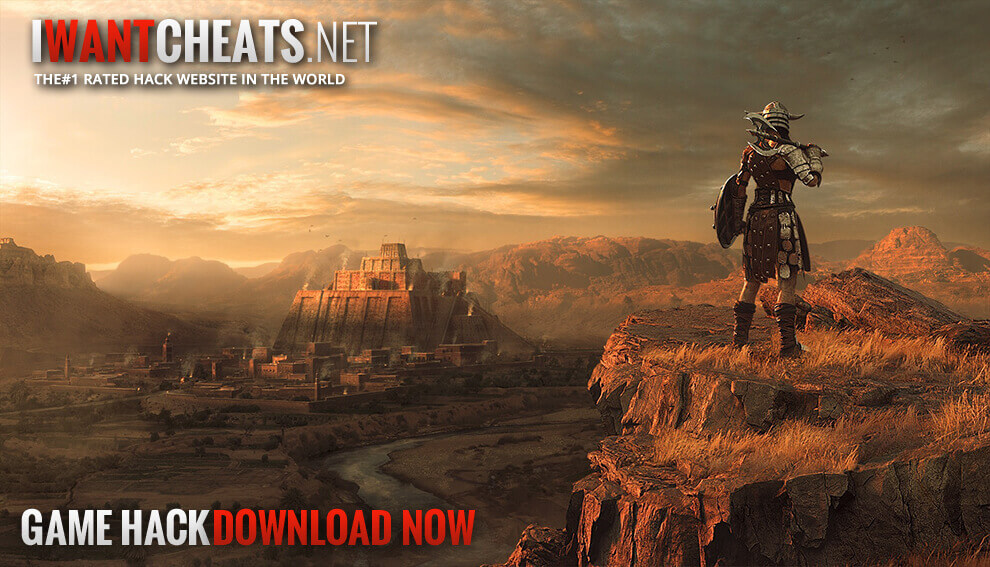 Once you’ve gained a preset or significant amount of favor, your God will reward you by granting permission to call upon His avatar, which you can control for a short period. During this time, you get the ability to annihilate everything in your path!

The Graphics
Feedback from players is good about the graphics. Many of them have commended the atmospheric feeling the game manages to provide, especially appreciating the beauty of the sandstorms. After experimenting all the way from the lowest setting to the highest one, players have come to the conclusion that the devs have done a great job.

However, one thing which should be noted is that most of the feedback is from players who use high-end gaming laptops or gaming rigs. For those of you having low-end computers, the devs have added the option to get the graphics to adapt to your PC’s capacity specifically.

Buy Conan Exiles & Get the Conan Exiles Hack Today!
As said earlier, the basic version is available for $29.99. The other version is named Barbarian Edition which can be purchased for $59.99.