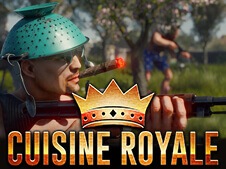 Let’s face it, this is one of the best multiplayer Battle Royale games we’ve ever played. Our new Cuisine Royale Hacks make it more fun and easier to come in 1st place every single game.

We also help you find every item you could ever want without having to hunt them down every round. Check out the Cuisine Royale Screenshot below showing how we display items for you inside the game. Also check out our new GTA5 Hacks with god mode and more. 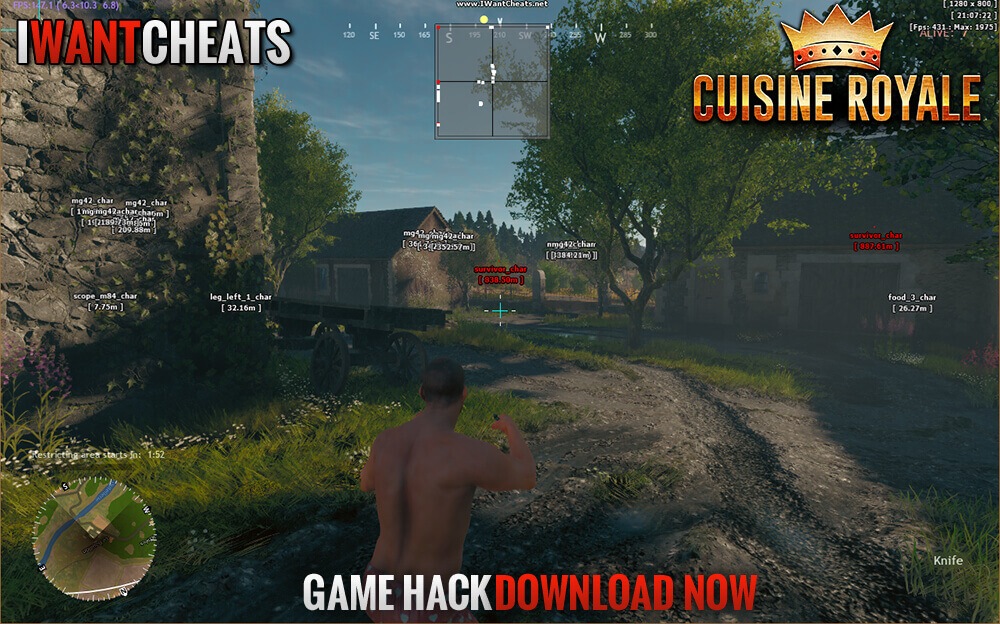 Why Use Cuisine Royale Cheats?

Have you ever been playing any MMO and noticed people suddenly find you and kill you out of nowhere?

They suddenly appear, and you can’t even get a shot off before you die and have to wait for a new round to play again. These are people using Cuisine Royale Cheats in the game, and they can see you at all times.

Look at this image below it shows how I can see the enemy player even while he’s behind objects, he is showing up with the red box around him. Get ahead of the pack with comprehensive Fortnite hacks and cheats. 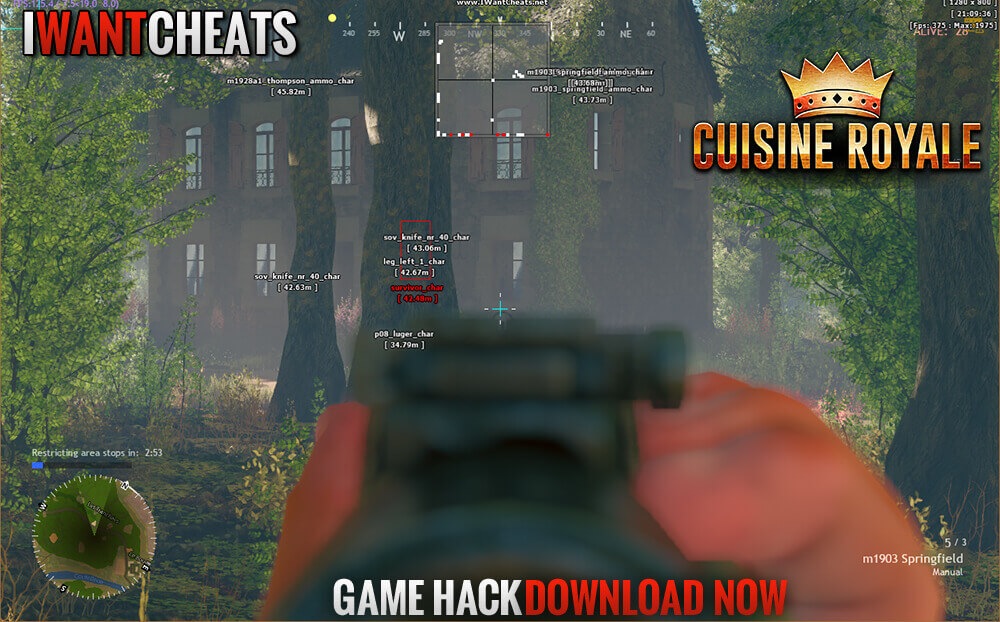 Have More Fun with a Cuisine Royale Aimbot

We give you even more options with the Cuisine Royale Aimbot which allows you to set up any key on the keyboard or mouse to act as an auto-aiming bot. We have just released MW2 hacks with aim assist.

Just press the Cuisine Royale Aimbot key, and the crosshair goes directly over the enemy and stays over him until you fire and kill him.

The aimbot makes the game seriously more fun because you can rage-kill everyone! 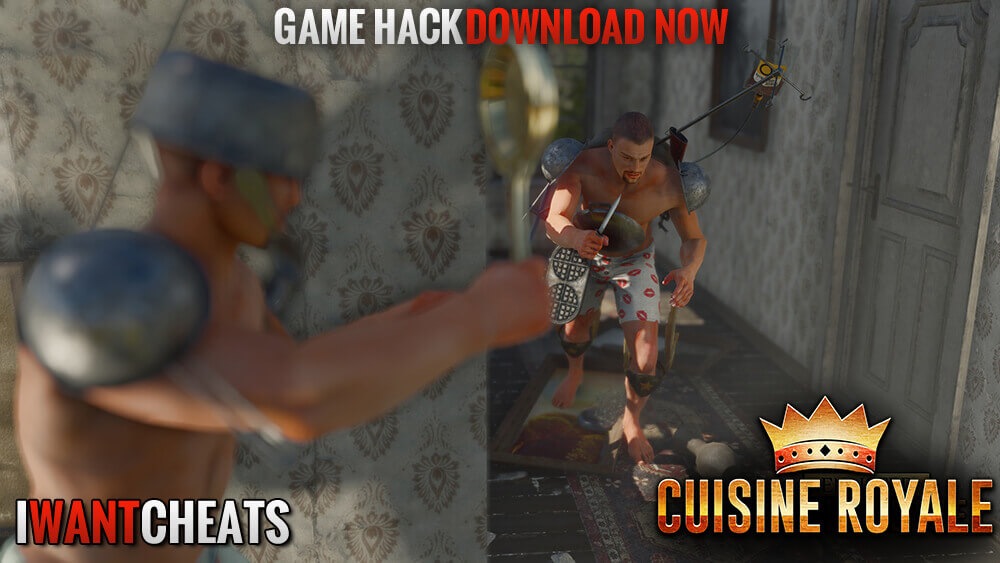 The Only Cuisine Royale Hack Released

We also show you the distance to each player as well as all item locations in the game.

No other cheating website offers ESP, Wallhacks, Aimbots, or any other cheat for Cuisine Royale that’s undetected. You can also get started with Warzone 2 cheats today.

ESP
– Name ESP: Shows the player name at all times, even behind walls or other objects
– Distance ESP: See how far away the enemy is located
– Box ESP: Draws a box around each enemy to show the location better

AIMBOT
– 360 Degree Bot: Can see the enemy and take them out anywhere
– Auto Switch: Changes to the next enemy after the first one is killed
– Boneaim: Locks onto a bone for faster killing
– Visibility Check: Won’t fire until the bullet can hit the enemy 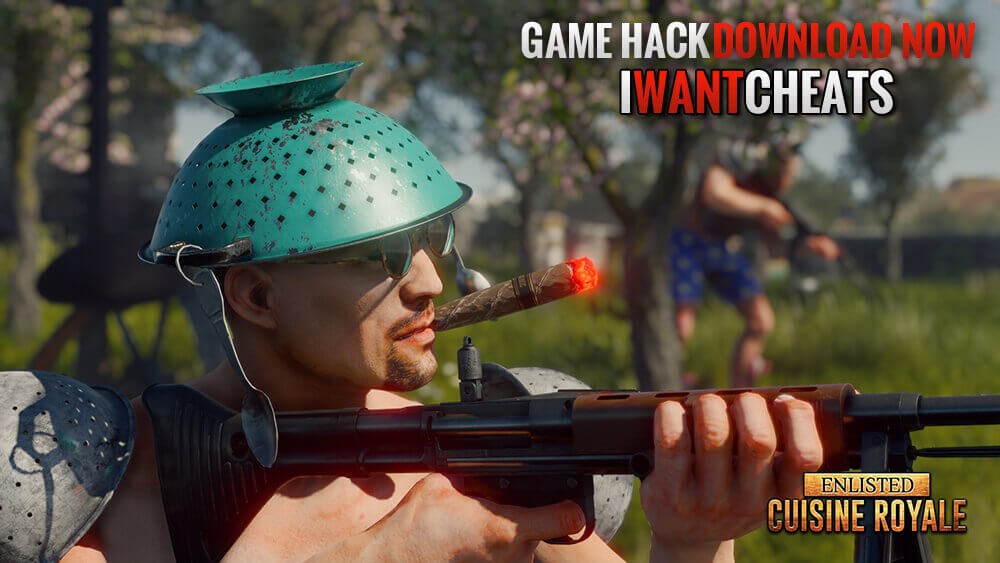 Cuisine Royale – All Out Kitchen Warfare

Cuisine Royale is known to be one of the most immersive and voguish multiplayer Battle Royale games to have surfaced this year with some wow-worthy special effects and stunning graphics.

The all-kitchen-warfare Battle Royale MMO shooter actually started off as an April Fool’s joke debunking some of the fantastic features and aspects of the Battle Royale genre but transformed into a highly trending title adored by gaming enthusiasts all across the globe.

Crafted by Darkflow Software, developers of Enlisted – another favorite battle-play title -, Cuisine Royale adds an element of ingenuity and creative gamification through the use of desirable multimedia features like kitchen utensils and unique armor to survive in an intense battling field.

The developers have specifically designed the gameplay to take the battle Royale genre to an exciting new echelon where 30 contestants start out on a single game map to take on each other and fight it to the death.

In parallel, the excitement and enthusiasm are further augmented by challenging scenarios where survival and resource assimilation are critical highlights. The game was free to play for all users on PC until June 25 when it became a premium, standalone title.

If you can’t resist high entertainment, and action-packed, thrilling gameplay, I highly suggest you purchase Cuisine Royale. With exciting combats, customizable characters, kitchenware armor, an intense World War II battlefield and unique weapons, this game is definitely not to be missed. 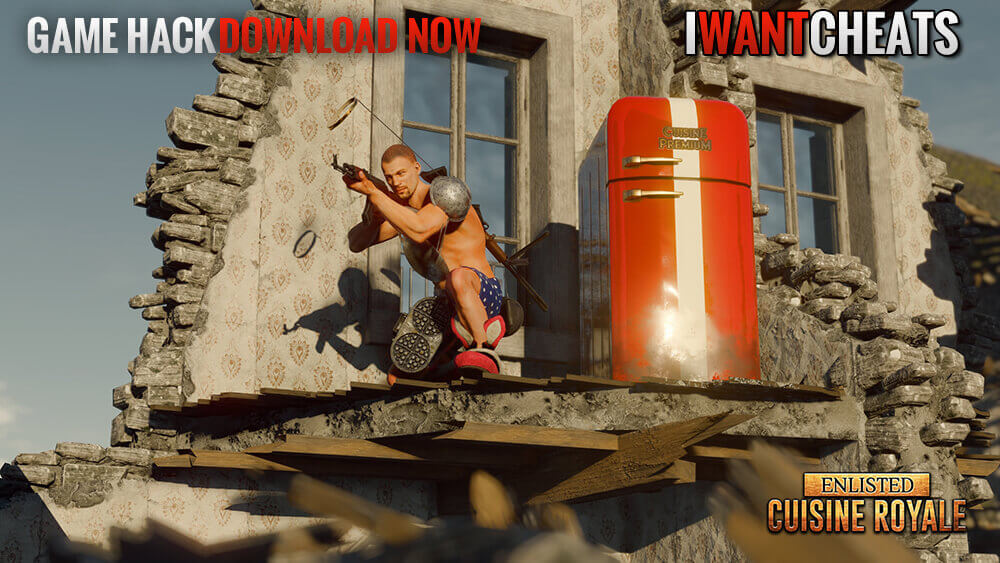 Cuisine Royale Gameplay
Cuisine Royale takes much of its gameplay features from traditional yet popular titles like Fortnight and Players Unknown Battle Ground.

Nevertheless, the game sets itself apart with distinct aspects like players wearing pots and pans, running around porous structures, and chasing others clad in cookware with the aim to grab the top slot at the leaderboard.

The plot includes thirty players from all over the world embroiled in heated combat for survival and victory wearing cutlery and pots for defense.

Starting out at the base location on the game map, you are tasked with the challenge of searching for the most beautiful pieces of kitchen utensils used as armor and unique weapons like pistols, shotguns, grenades and machine gun to add to your repository of resources.

Additional items like food, cigars and plastic bags are also to be scavenged and collected to build up your character. These are also essential items for getting powerups and rewards like good health, precision in shooting, and healing power.

As with regular Battle Royale games, here too the last man standing wins the title and snags the top slot at the leaderboard. The entire gameplay is a fusion of hilarious hunting and thrilling battle play that makes Cuisine Royale standout among other favorite games in this genre.

Because the developers designed this title as a funny take revealing peculiar features of battle play, the fun vibes you experience throughout the game make you pine for more gaming. 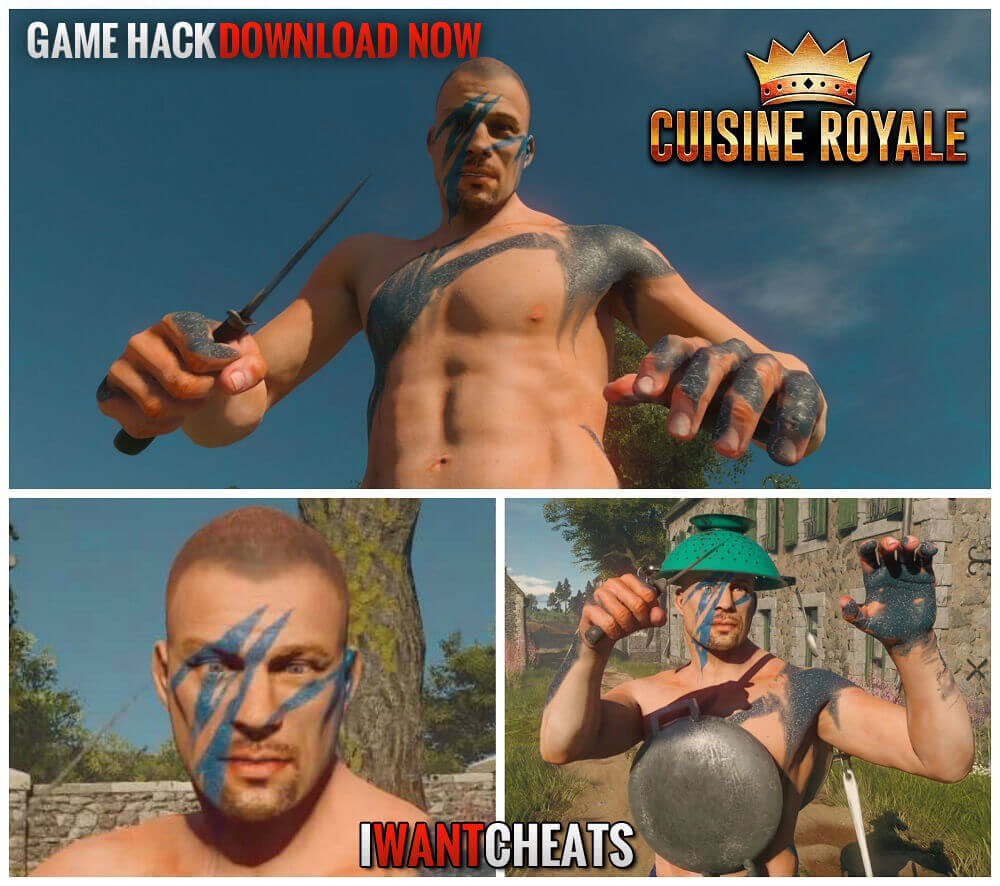 Cuisine Royale Features & Game Dynamics
If you have enjoyed playing the squad-based MMO shooter Enlisted, which became a roaring hit, you will find this title even more entertaining and engaging because it comes from the same developers who are aiming at adding creativity and swag to battling based gamification to enhance the overall user experience.

The anticipation of who will emerge victorious in an ever-shrinking game map marred with rugged, intense structures reflecting ruined homes and barns of a World War 2 fighting field that players move through keeps you glued to the screen while the challenging combats make you want to step up your fighting skills and put them to the test.

The final match entails ‘core battle play’ where only the most experienced and powerful contestants lock horns with special weapons and artillery that they have gathered throughout the missions and combats.

While playing this highly enthralling game, you are caught between fits of laughter and blood-pumping excitement as you shield yourself with dinnerware and make your way to the center of the battlefield avoiding snares and slaying opponents on the road.

Do not underestimate the power of pots and cookware. They are as strong and potent as machine guns and explosives. Bang an opponent’s head with a frying pan and whack your enemy with a waffle maker to unleash the most devastating impact.

Strap on a Wok which doubles as a breastplate or you can use a large colander as headgear for protection against the fiercest of enemies. Wear a large metal platter to shield yourself from other player’s attacks as they would be looking to ambush you and grab the loot. 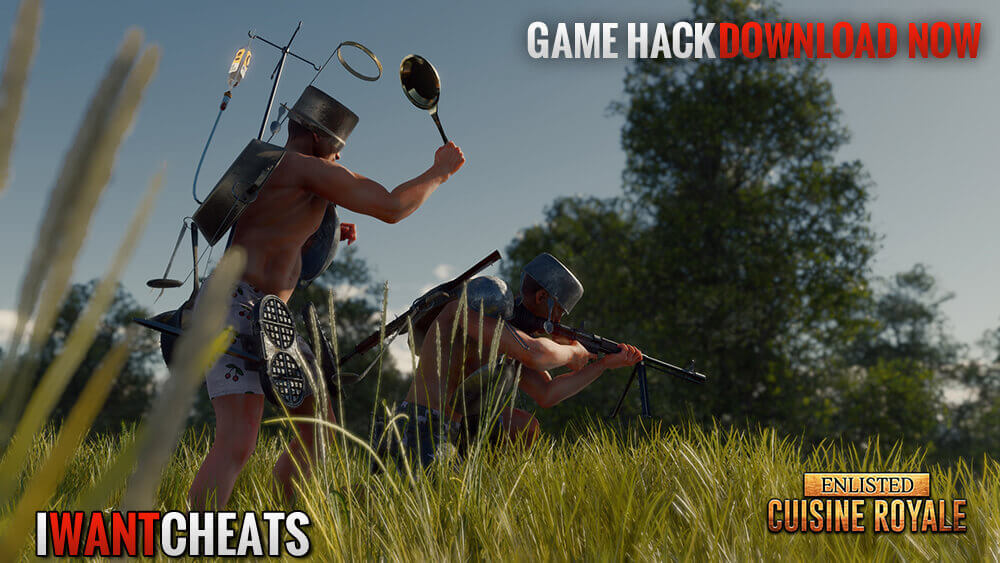 Cuisine Royale Weapons & Powerups
Stay vigilant and use the gathered armor, utensils and weaponry to kill your opponents and grab their dropped loot instead. These pieces of armor can keep you safe from the detrimental effects of the most specialized weapons.

You will also notice loads of loot boxes scattered across the entire battlefield. This is another noteworthy feature which makes Cuisine Royale different from other games in the Battle Royale genre.

It is, in fact, the first time in the history of gaming that the developers have come up with the idea of free loot boxes that can be opened by you in the arena to step up your survival chances and increase your strength and stamina which you need a lot when battling others.

The loot boxes contain powerups including equipment and resources which are highlighted when the box is dropped, and what is said to be inside is 100% correct.

A loot box with medical supplies, for example, will help you to heal up quick and benefit from accelerated health regeneration. Additionally, you can also chew on a cigar to transform your character into a formidable and robust contestant that can withstand twice the amount of substantial penalties.

The fantastic Battle Royale MMO shooter game tests your survival tactics and the knack of using kitchen accessories as powerful weapons and tools for defense.

Aim for a three-star rating in this action-borne kitchen warfare and try to grab the winner’s slot by completing difficult tasks and achieving significant milestones.

Featuring a treacherous Battle Royale Death Match mode, you are expected to fight each other with nothing but your skivvies first. With each level, you strengthen your character as you locate and assimilate an entire horde of World War II weaponry, from simple pistols and rifles to more lethal ones like heavy machine guns.

In this brilliant World War 11 Battle Royale, traverse the fields of Normandy and use an assortment of massive arsenal including knives, axes and bullet-pumping guns such as the M1 Garand, MP40 and Mosin Nagant to take the lead and pin down your enemy.

The game also features some impressive powerups that you can use throughout the game to gain an edge over the other players. These include an IV for health regeneration, a thick pair of glasses for greater weapon accuracy and a Cuban cigar which you can chew on for increasing your hitpoints.

If you want to stay undetected while using hacks in PC games, then you should always use an HWID Spoofer program to change your hardware.

Cuisine Royale User Tips
Contrary to other popular titles in this genre like Fortnite and PUBG, Cuisine Royale entails unique gaming elements coupled with state of the art graphics technology to provide a memorable Battle Royale experience to the gamers. The most crucial aspect of the gameplay is survival and assimilating sufficient resources to gain as many reward points as you can.

Here are a few tips which will help you keep track of your opponents and devise strategies in a better way to be the last player alive in the battleground.