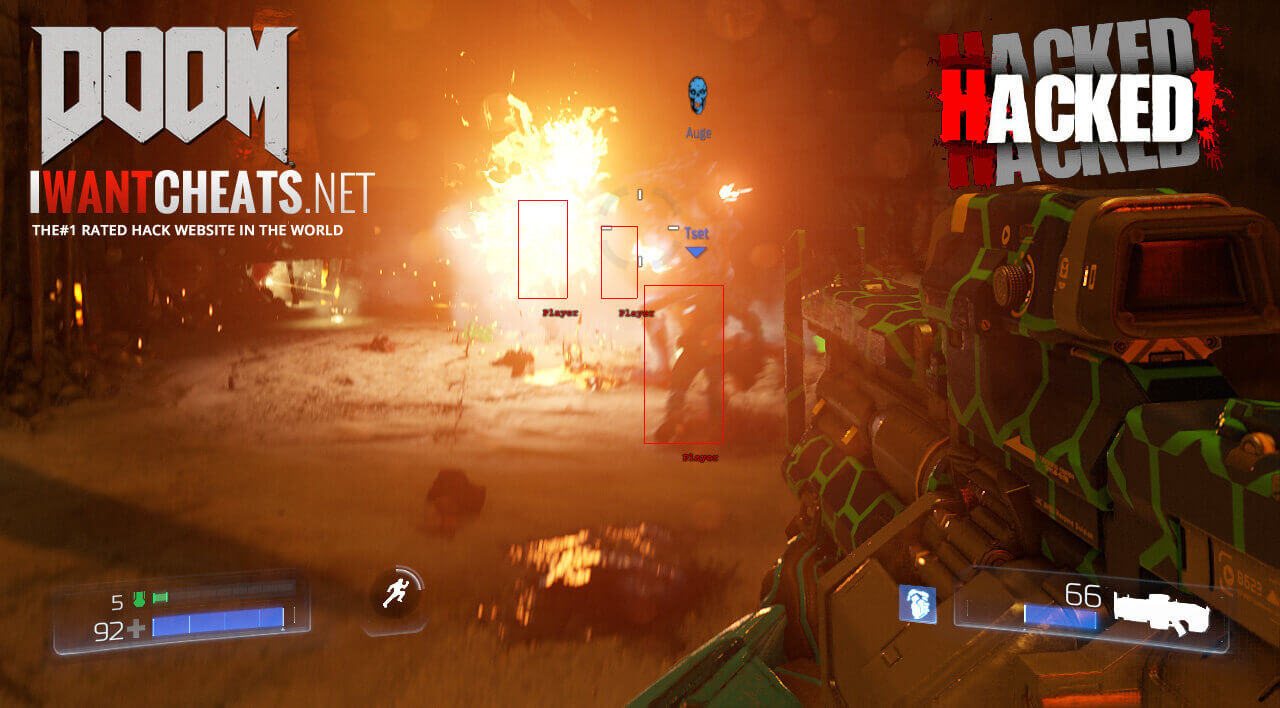 We have one of the first Doom 2016 hacks released, and you can download it now when you register on the forum.

Check out the new Doom on the Steam page and see what others have to say about it if you haven’t downloaded it yet.

How Will the Doom Hack Help Me in-Game?

Our Doom hacks show you every player’s location at all times. You can see them behind walls and prepare to kill them when they pop out! Want to be the best player with all the skills? IWantCheats has been known for making the best Fortnite cheats for PC.

Simply download our cheats and let us help you win. In the Doom hack video below you can see how the aimbot locks onto every player and kills them, you can also see how the hack allows you to always see where the players come from at all times.

Will I Get Banned for Using Doom 2016 Cheats?

You won’t get banned using our Doom cheats; we haven’t had one ban on any game in over a year; our coders are that good!

If you decide to use cheats or hacks from another website you may get banned because many coders don’t have the same skill level.

If you love our Doom product and its features then have a look at the top-selling hacks for Modern Warfare 2.

Do You Have a Doom Aimbot I can Use?

We have a full Doom aimbot released for the game along with VIS checks to always take down the player, usually, before they can even hit you once! 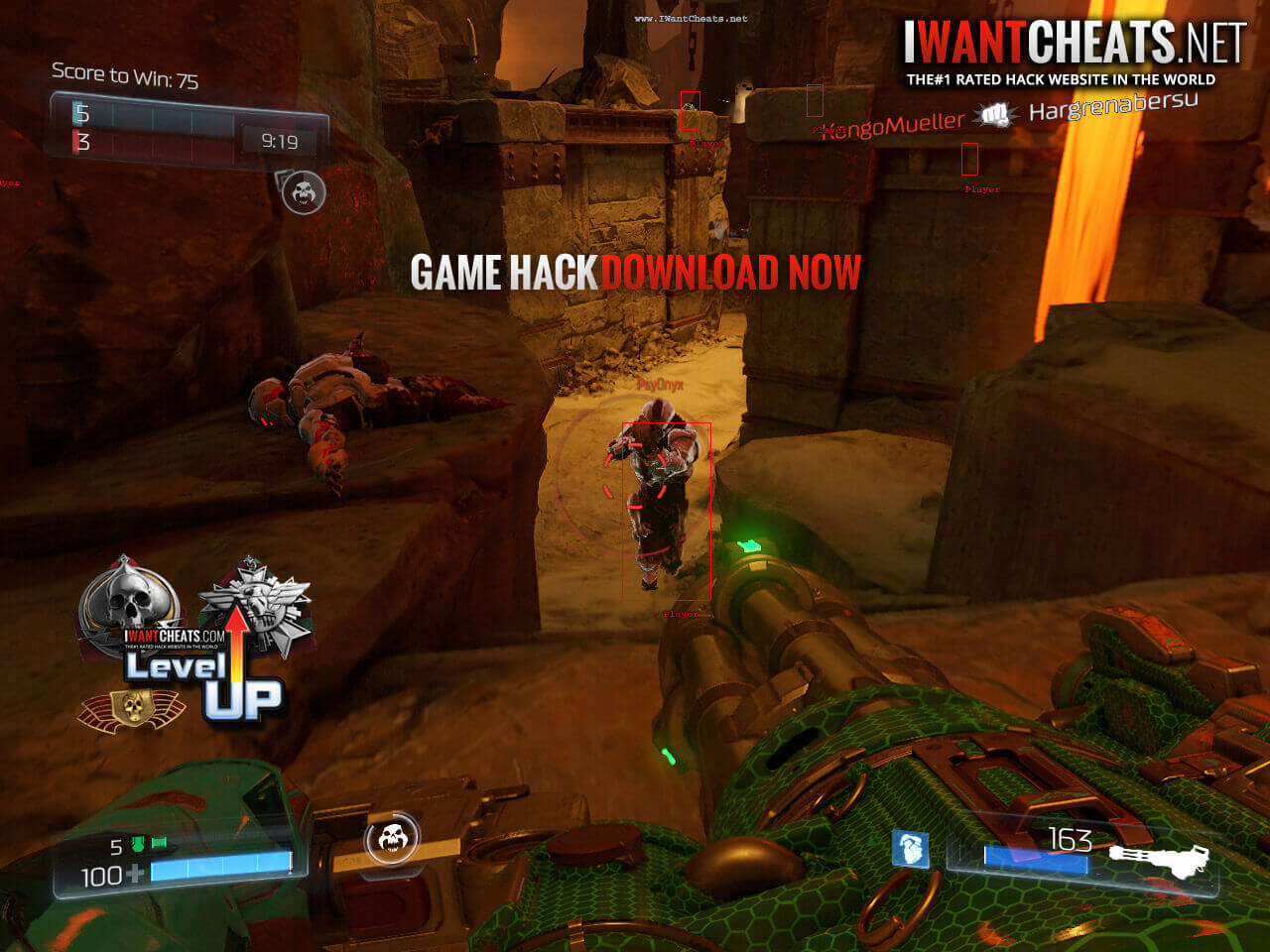 1) Register on the Forum
2) Click here to Select the Doom Hack
3) Now go to the VIP Forum
4) Download, Start the Cheat, and then the game

For a large selection of Warzone 2 hacks with features such as aimbots and instant kill, always ensure that you use a trusted provider.

Doom is a first-person shooter video game in the Doom series developed and published by ID Software and Bethesda Softworks respectively. Reboot to the last game in the series – Doom 3 – it is the first major installment after a gap of 12 years. Scheduled for a worldwide release on May 13th, 2016 (today) the game is available for playing on PC, PS4, and Xbox One.

Unlike Doom 3, Doom (previously known as Doom 4 and stylized as DOOM) is a fast-paced action-filled game to keep the fans interested, in addition to throwing enemies around the players all the time. The best thing is its frame rate which does not drop even when you fight with multiple enemies.

Though the development team including the likes of John Romero, John Carmack, and Tom Hall left ID Software, the studio still had in itself to create challenging environments of hell and corridors of a research lab to make the all-new Doom an absolute wonder.

Each game environment is filled with an infinite number of monsters that you must fight. Do not forget to collect health packs, armor, and important upgrades along the way to add to your progress. 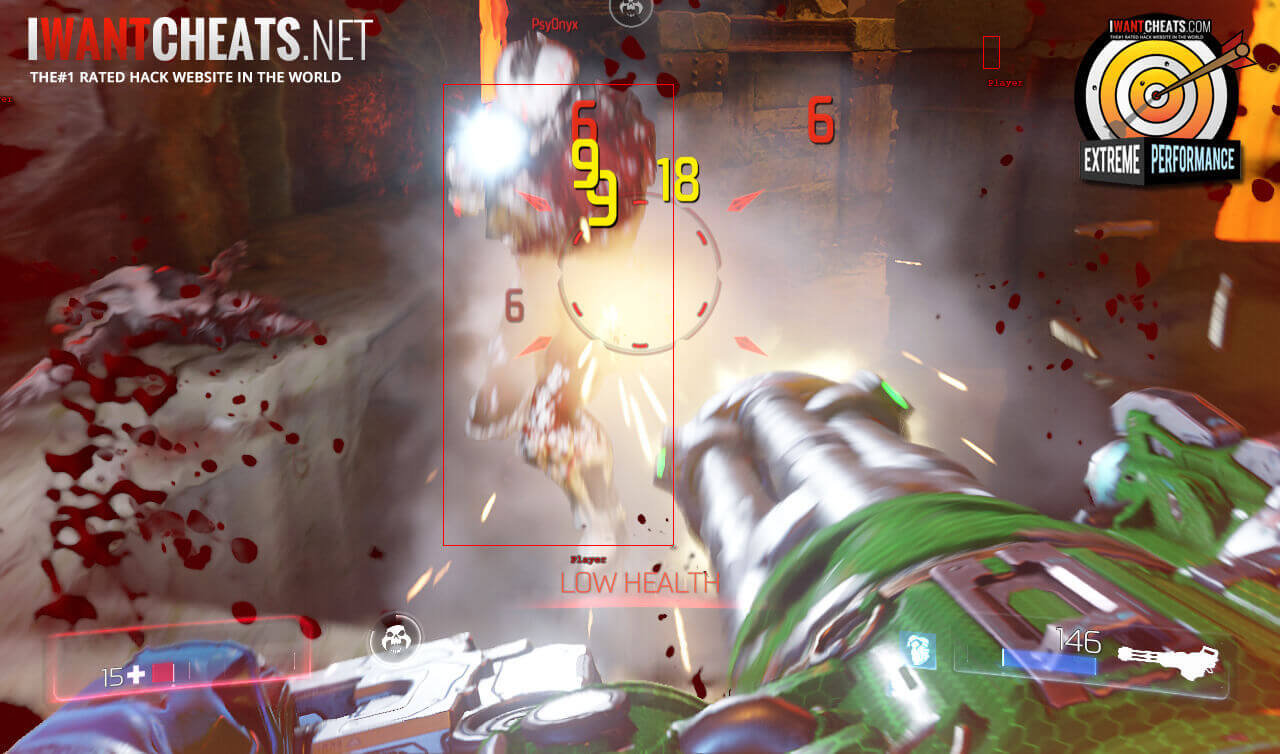 Doom is available in 3 game modes: Single-player, Multiplayer, and Snapmap.

The executive producer of ID Software, Martyn Stratton describes the game’s single-player mode as “Badass” considering the demonic nature of enemies, ruthless weapons, and fast-paced environment. The game consists of an extensive collection of weapons, which you can either collect or switch with other players as you move along. The game also features super shotguns such as BFG 9000 and melee weapons that can split an enemy into two pieces. Revenant, Cyberdemon, and Mancubus enemies have also returned to the latest installment, whereas many others have been redesigned.

The fast speed and energy of the game have also introduced new movements. For instance, the double jump allows players access to areas that are otherwise inaccessible with regular changes. The game also features a new combat system called “push forward combat,” which does not let you recover by hiding behind an obstacle. You can collect health kits and armor to defend yourself while fighting with enemies to regain health. Moreover, the game hosts a new system of knocking the opponent, also used in PWAD Brutal Doom, another popular action game. This mechanism highlights the damage done to the enemy, when massively hurt, allowing you to make use of a move called “melee takedown.”

The single-player mode stretches up to 13 hours with its Ultra-Nightmare difficulty level including “permadeath” according to the development company.

The multiplayer mode of the game is developed in association with Certain Affinity and includes several multiplayer modes such as Team Arena, Conventional Four-player Deathmatch, Freeze Tag, and Domination Warpath. Players can make use of teleporters and power-ups to boost their fighting skills against other players in multiplayer mode. When you use the Doom hack it allows you to see every player and the Doom aimbot locks on their head allowing you to always win. 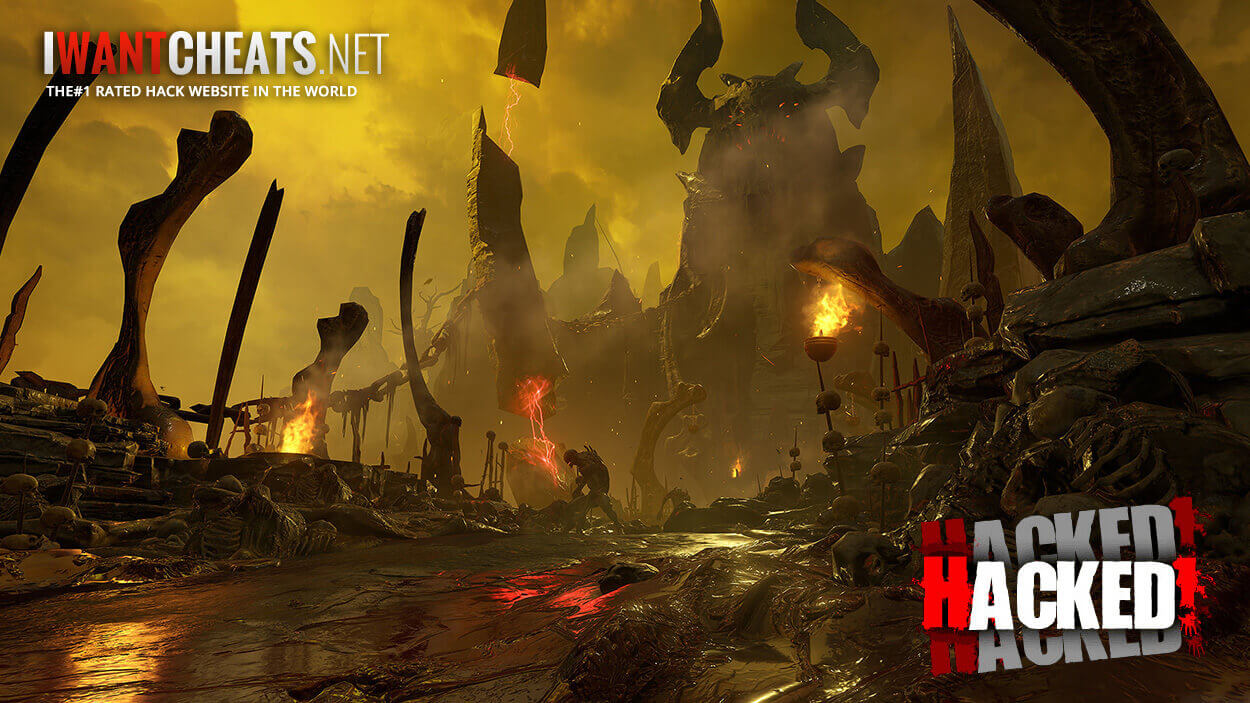 SnapMap Mode
For the first time in the series, Doom features a tool named “Doom SnapMap” that helps you to create and construct new game maps and modes to share with other players through the online community. Creating a plan is effortless, starting off with a standard template map you can tweak a few things around to get what you desire. You can also use maps created by other players. By default, the game is equipped with nine maps. Though Snapmap is not a novel idea and has become common in action games, it is welcomed by Doom’s online player community.

Exploring Maps for Secrets
Doom 2016 has a lot of areas that you can explore to unveil secrets and find hidden treasures. Be careful of the enemies, though, as the game hardly includes any arena that is not filled with monsters. Turn up every stone and you may find powerful weapons and even Easter eggs hidden by the ID Software and Bethesda to add to the excitement of fans.

Abundance of Weapons
DOOM presents some ways to knock out demons. As mentioned above, the addition of classic super shotguns and melee weapons provides a robust combat experience to the players. You can also switch between these weapons during the battle to kill enemies.

Multiplayer Progression
Similar to the single-player mode, Doom 4’s multiplayer mode throws many customizations offers for the players. The multiplayer progression consists of 50 levels; however, the level resets back to level 1 upon completion of the 50th level. You also receive an Echelon rank, which helps to unlock additional customization options. The game offers ten echelon positions encompassing 50 levels each, in the multiplayer mode to provide an endless encounters with the enemies.

Glory Kill
The game lets you go for a glorious Kill by highlighting the status of the monster’s health to regain health; this makes the game easier than expected. If you want, you can turn off the enemy health status highlights through the game settings!

Monster Details
Consisting of hellish monsters from imps to gruesome cyber demons, DOOM never fails to surprise the players. The interesting enemy design by ID Software is not innovative, but has still impressed everyone in today’s age of Tech 6 game engine! 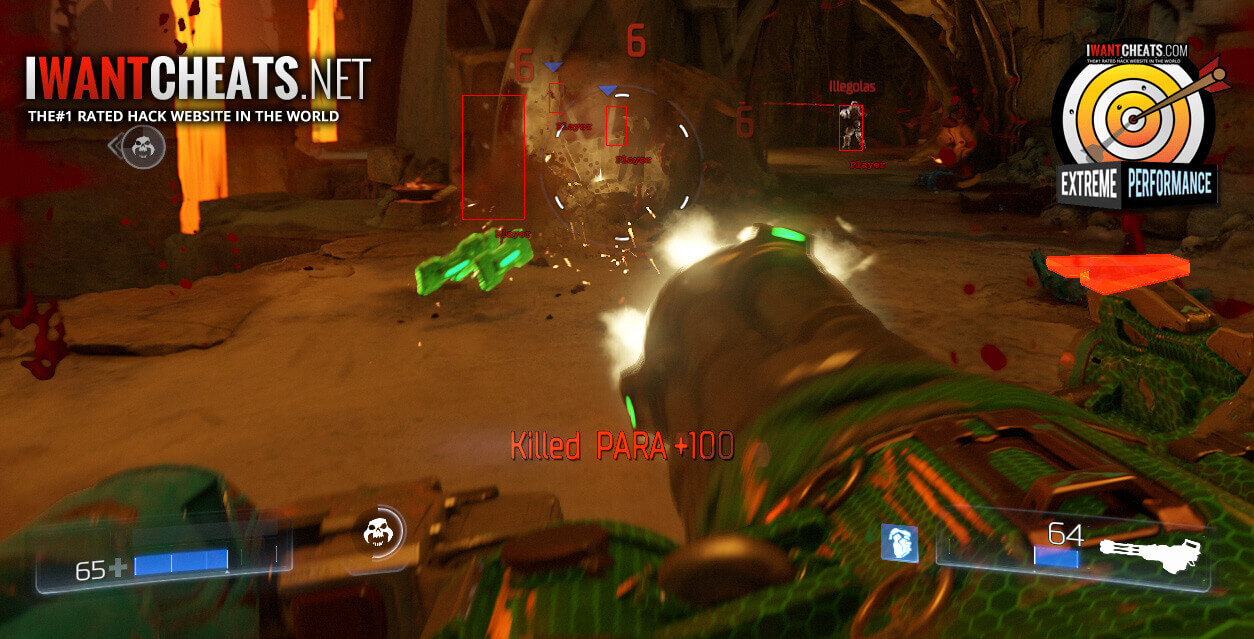 John Carmack, the lead developer at ID Software in 2007 shared the idea of developing Doom 4 at QuakeCon 2007; however, the official announcement was made on May 7th, 2008. Todd Hollenshead, CEO of ID Software suggested developing the latest Doom-like Doom 2: Hell on Earth, taking the battle back to the earth, as was also the case in the original Doom game in the series.

As Doom 3 was released 12 years ago in the year 2004, the long gap reduced not only its popularity among the younger audience but also made room for other first-person shooting games to grow on its fans in its presence. This made things difficult for the development team of ID Software, as they had to develop a game that could compete with the likes of Call of Duty and Battlefield. The development team also had to create something unique to stand out from the rest of the first-person shooting games, while staying close to the plot of other games in the Doom series.

For countering these challenges, the team had a meeting with the creative game directors of the Bethesda Game Studios, as they had dealt with a similar situation at the time of working on Fallout 3. The development team also included a lot of over the top skulls to add to the game’s personality, but no extra emphasis was put on the story of the game by them.

Running on consoles at 1080p, 60 fps, DOOM delivers a decent gaming experience from the graphical point of view and can be considered an HD remake of the original title in the series. But, there are occasional graphical flaws that pop in, but fortunately do not look odd considering the style and feel of the game. The lighting effects combined with the background music back up the game’s cold environment, which is all about shooting at the enemies in a cruel way.

The best feature is how the game holds up even in the most crowded sections. The frame rates do not drop to deliver a smooth action experience even when a player is surrounded by multiple opponents involved in a full-throttle firing at each other. In fact, the PS4 version of the game simply looks spectacular in motion! Doom’s single-player can stretch up to 13 hours or more depending on how you approach it.

The game is significantly costlier than the other games in the series (mostly priced around $34.99) set at a cost of $39.99 on both PS4 and Xbox One. The PC version costs less, priced at $29.99, but is double the price of other action games available on the platform.

Doom’s revival after 12 long years with the help of Bethesda was needed from the fans. Though there’s not much to add to the DOOM’s main storyline, the addition of weapons, demons and gory details will keep things exciting.

The injection of new ideas such as Snapmaps is also an exciting addition to the first-person shooter genre. The graphics are decent but not high quality, but the fast-paced nature will keep players glued for long hours, especially if they love the idea of shooting and throwing enemies around!

We also have the highest amount of specs for Fortnite hacking products that cannot be matched by the current offering on the market.