IWantCheats is the only website offering game hacks for the Goldeneye 007 source mod.

If you haven’t played the 007 mod yet, I have excellent news for you!

The 007 mod is a replica of the game on the N64, and you can download Goldeneye 007 Source for free, so get it now you’ll be super happy you did.

What Features Does the Goldeneye 007 Cheat Have?

Right now we have over 40 features to help you win every round. The game has a full aimbot, trigger bot, chams, and so much more. You can see from the picture below how the cheat looks in the game. We also have a new article so you can learn more about Fortnite hacks and how to currently use them on the battlefield. 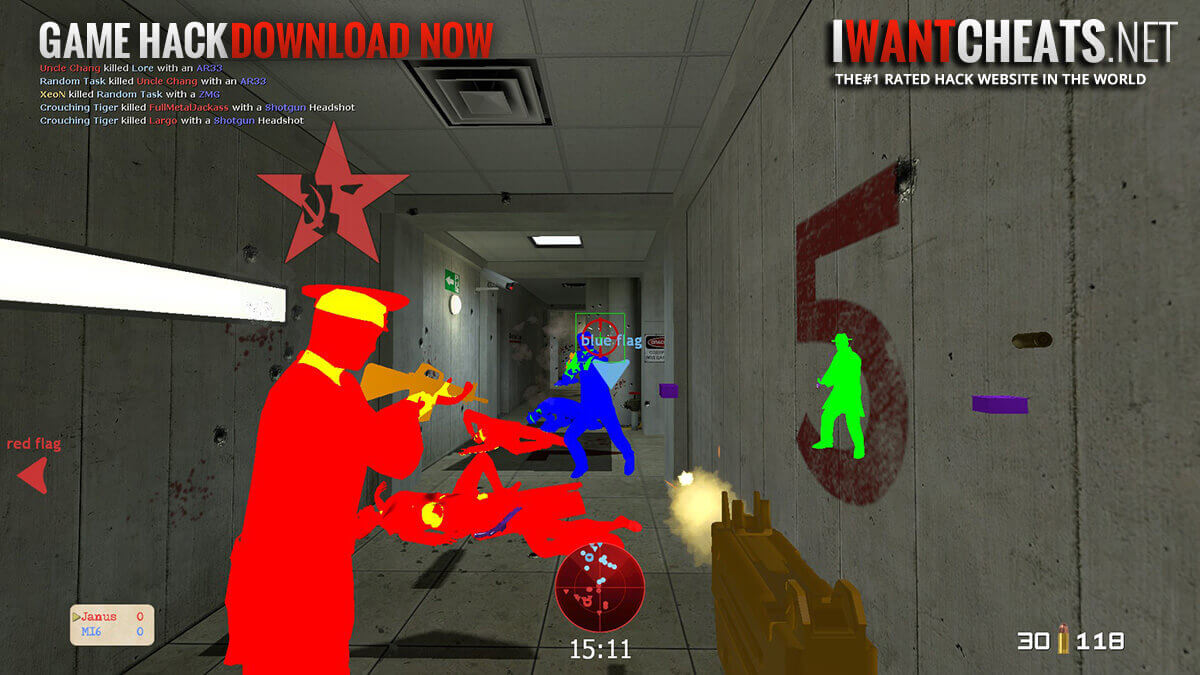 Can I Get Detected or Banned on Steam Using the Hack?

Our coder has been working with cheats for over 12 years, and we have never had a detection on Steam.

So play the Goldeneye 007 mod without having to worry about getting banned.

If you want to be super safe, just make a new Steam account because the game is free.

COD Warzone has one of the most advanced anti-cheat programs, yet our undetected Warzone 2 hacks are still used by thousands of gamers.

It’s simple and only takes a few minutes to join. 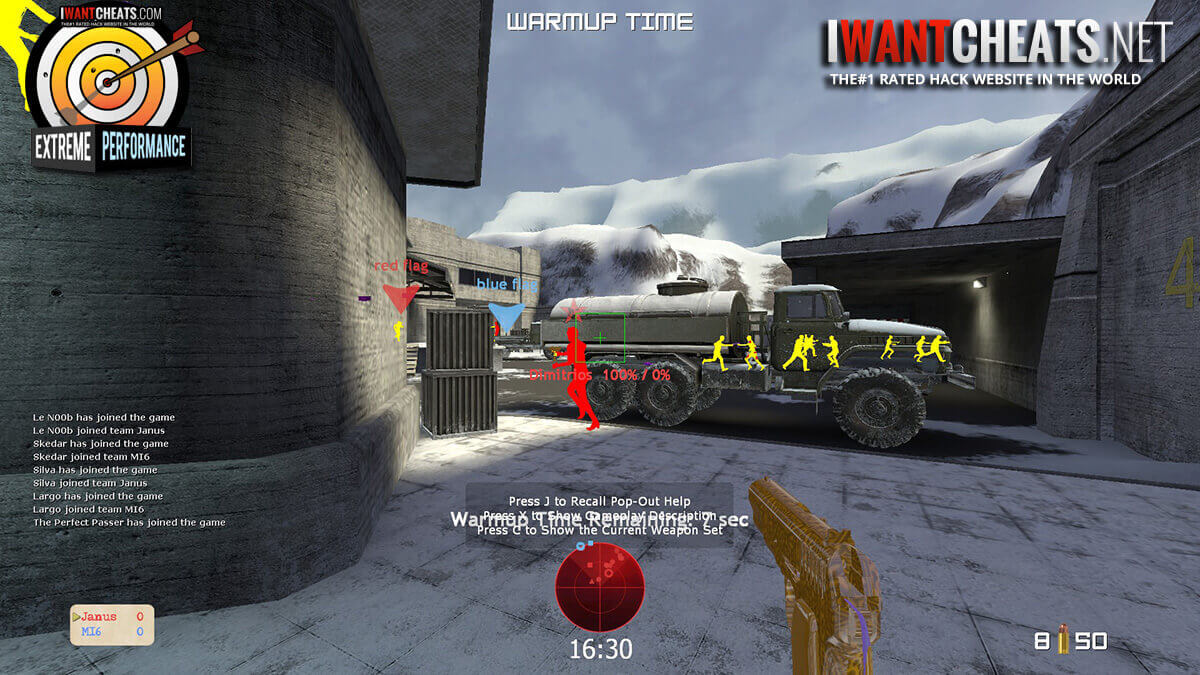 GoldenEye is amongst one of the favorite old games of all times for Nintendo 64 owners. GoldenEye: Source is the latest remake of the original N64 and its source DNA. Many remakes have been made since its release in 2006 owing to the enormous success of GoldenEye. GE: S touches on the technical aspects of the game, rendering the facilities of Unreal Engine 4 to come at par with the gaming standard of the games built today.

GoldenEye: Source is the result of 10 years of developmental efforts. It is a mod that has received the first update this week in 3 years. Though the players have been playing the same game for the last decade, the new update received has overhauled this game to a significant level. The game is available for free download.

GamePlay
GoldenEye: Source can also be considered as a significant modification of another game named Half-life 2.

Goldeneye 007 Source features several gameplay scenarios from the original GoldenEye 007 in addition to some new ones. The summary for each gameplay is shared below.

The Rundown
The gameplay scenario is influenced by the James Bond movie titles and content specifically including Man with the Golden Gun.

Deathmatch
Deathmatch, as the name suggests, contains hardcore violence focusing on your enemy. It requires you to kill as many individuals as possible during every round. It includes an option to end the match by enabling a frag limit. You can also switch maps once the limit is reached by any team player in the game. It supports team play.

Dr. No Armor
Dr. No Armor is similar to Deathmatch but staying true to its name does not feature any armors. Like deathmatch, it also supports team play. 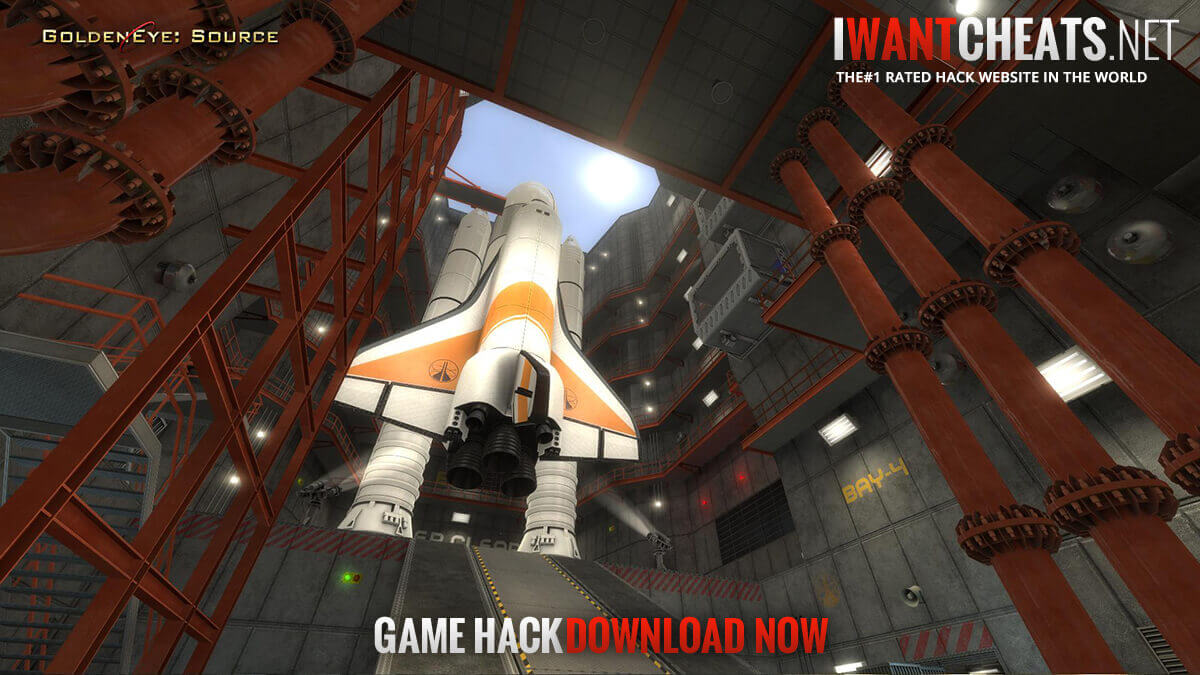 License to Kill
License to Kill game mode causes instant death with a single weapon hit against any body part regardless of the protection. The gameplay does not include radar, and also supports team play.

You Only Live Twice
You Only Live Twice is influenced by “Last Man Standing.” The gameplay offers you two lives in one round. After losing your second life, you will be put into observer mode and cannot respawn until the round ends or only one player is left. The winner is declared on the round report but may not necessarily be the player with the most kills.

Man With The Golden Gun
Man With The Golden Gun uses pistol marksmanship with challenging gameplay. You need to capture the Golden Gun to fight your enemies. Grabbing the gun will mark your bright gold on the map gaining the attention of everyone toward you. The Golden Gun has to be reloaded after each fire, making it necessary for you to focus your shots carefully. The bright side is it also kills with only one shot.

Capture The Flag
Capture the Flag is also featured in other GoldenEye games. There are two teams and each needs to capture and return the flag of the enemy to the capturing point. Walk over the dropped flag if you are killed on your way to carrying it to the capture point to respawn it immediately unless your opponent picks it up. 5 points are given for winning the flag, 2 for defending it, and 1 for returning it successfully. The round triggers overtime in case of a tie.

Gun Trade
Gun Trade is all about trading weapons with your enemies. You also need to kill as many players as possible to win the round. The round starts with a randomly selected weapon from a list of 24 weapons. The gameplay does not feature time, proximity, or remote mines. You can swap weapons with another combatant upon killing an opponent.
Vanquishing players with a slapper will eliminate the victim’s weapon from the list of available weapons, but assigns a new weapon from the available pool of unused weapons to the attacking player.

A View to A Kill
View to A Kill is about surviving as long as possible. You are awarded for the duration of staying alive instead of your kill count. However, killing another player will add 50% of their current time to yours, whereas dying will reset it to zero. Killing a player with Slapper will reward you with 75% of its present time. Increased time marks you on the map-making you an alluring target for the enemies.

Arsenal
Arsenal is influenced by Counter-Strike: Source modification. Every player starts with the same weapon to progress to the list of 8 weapons in the given set. You need to kill twice with every weapon to move to the next weapon. Killing becomes difficult as you move to a new weapon. The first player to make it to the final weapon wins. 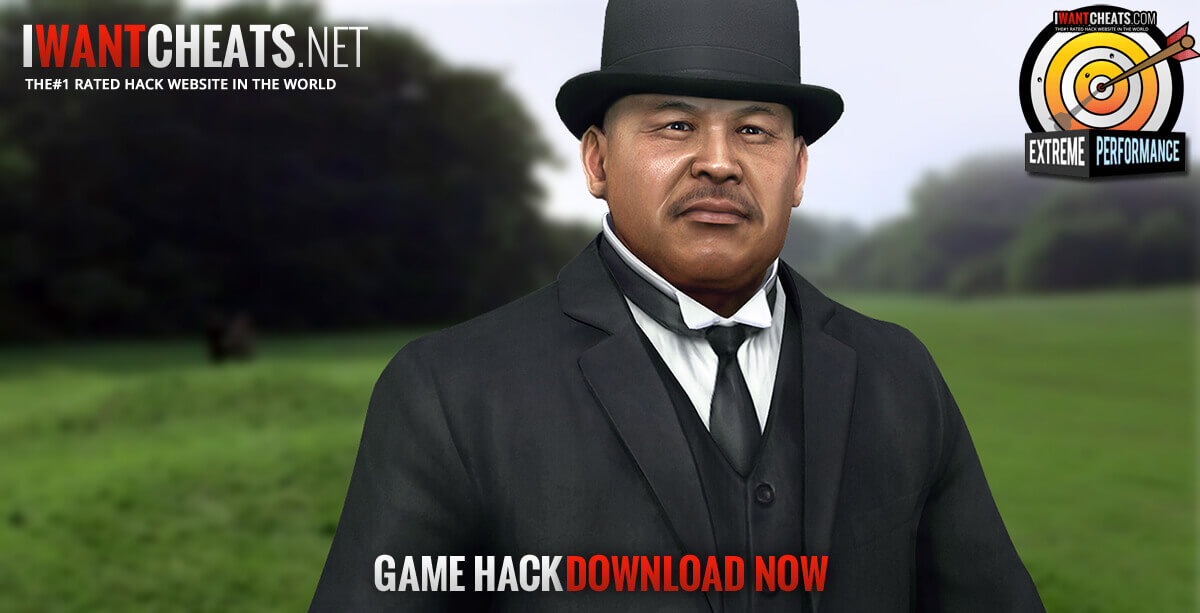 Major Updates
The game promises an entirely new experience for the gamers taking it to the next level. The experienced developers have worked hard day in and day out to provide a hardcore GE64 gaming experience. The GE: S keeps the original game feel but includes new and improved features in the form of fun gameplay, secondary missions, new maps, and weapons to breathe a fresh wave into it. The mod is dedicated to the head of the Source mod leader, Nickster, who died ten years ago.

Goldeneye features 25 new maps, and redesigned weapons from a collection of 28 along with ten updated multiplayer modes.

Transformation
GoldenEye: Source is an incredibly transformative game. It provides the capacity to play with 16, 24, and even 34 players on the right map, unlike the GoldenEye N64.

Game Movement and Focus
In addition to the multiplayer mode, the movements, and the aiming system is the biggest game-changer in a positive sense. Crouching in GE:S you can accelerate a bit in the direction you are moving. This makes movements such as crouch-dodging efficient, especially when you are battling a circle-strafe duel with another person, firing RC-P90 bullets at another individual and you cash in by picking the right time to crouch-slide under their spray to break the assault. The crouch-dodge slippery movement technique makes a player totally at home in a light-hearted arena shooter.

Makes You Run Fast
The new change embedded into the GE:S makes players run 40% faster while moving diagonally, adding more fun and stimulation to the duels.

Another significant change includes pressing the right mouse button or shift key to use a gigantic red reticle. Focusing on your enemy in this way may seem strange at first, but it will help you to choose between speed and accuracy, as it gives you the ability to aim at the enemy by moving slowly.

Bombings and Shellings
GE: S builds on the calamity of the original Nintendo 64 couch FPS despite the significant adjustments made to it. Combats and duels are extreme and chaotic. It still gives you the feeling of never having the edge over your enemy during the duel and going all out spraying your guns. The firefights also provide a lot of fun while keeping you hooked to the game.

Maps
GE:S has included new maps Depot and Dam while rebuilding several others. The roster map is given a round shape. Aztec includes a mix of aesthetics such as the ancient stone columns, a space shuttle, and a bright control room. The Bunker and Caverns maps have undergone a complete remake and have been worked on by the development team for many years. 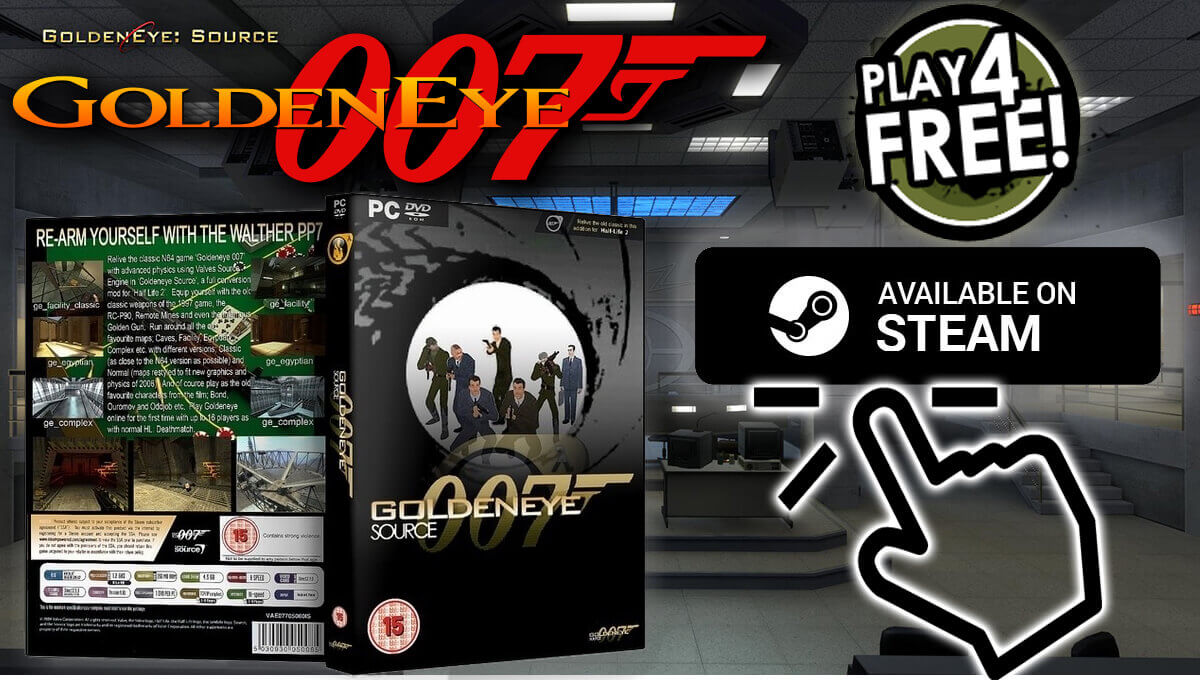 Other Game Areas
The other game areas include game animations which are quite simple yet proficient. There is some sameness in the movement of the characters. For example, Bond, Jaws, and Oddjob have a similar posture depriving GE:S of some personality.

There are some weak points in the game. The GE:S AI bots are dull and showcase weird behaviors such as getting stuck now and then.

Graphics and Soundtrack
The GoldenEye: Source features modern graphics with an updated soundtrack. The game’s original composers and electronic have produced a remixed version of the main theme in addition to creating 79 new tracks from five artists for the game. Some music inspiration is also taken from the original model.

Verdict
GoldenEye: Source has gained the attention of fans. The game will make you experience nostalgia while offering a new design, movement, and fighting experience to add to its personality. This is also what makes it pretty exciting and fun to play with if you are a hardcore GoldenEye N64 or its Source DNA fan.

You can also read this awesome blog post on how to use hacks effectively in Modern Warfare 2.