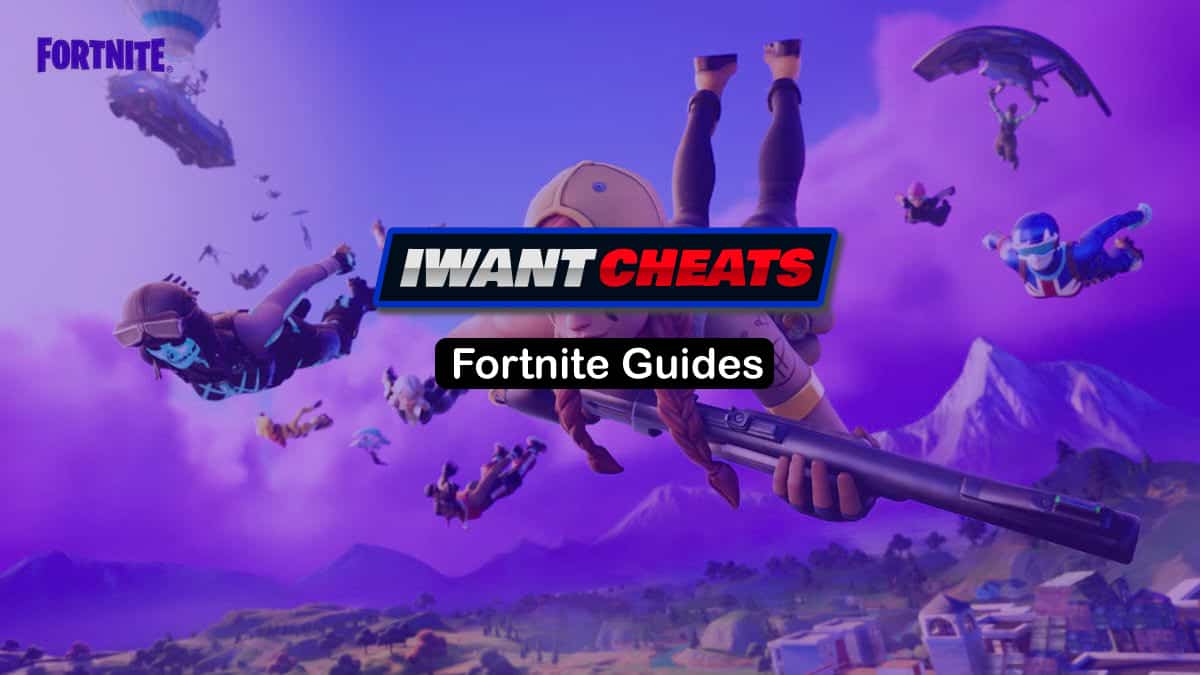 As Fortnite has changed and grown over the years, one major mechanic has remained the same: dropping into the map at the beginning of every match. This is one of the cornerstones of the battle royale genre, and it’s easy to see why. It adds an extra layer of strategy and interactivity that many other competitive shooters just don’t have. We also recommend that you view our comprehensive guide on how to get better at Fortnite.

Best Places To Land in Fortnite

However, few other battle royale games do map overhauls to the extent that Fortnite does. Every chapter and season bring with them massive changes in what the best places to drop into actually are, and what kind of gear you can get from those places.

If you’re looking for the best landing spots for Chapter 3 Season 4, then you’ve come to the right place! Join us as we cover a few of the most ideal locations to begin any match, as well as some of the goodies you can find in those locations. To ensure you don’t instantly get taken out when landing in Fortnite, you can always use our Fortnite Aimbot to take out your enemies before fire upon you when landing in competitive zones.

If you were ecstatic when The Daily Bugle was added to the Fortnite map at the beginning of Chapter 3, then we hope you got as much enjoyment out of it as you could. The Daily Bugle is no longer there, and it has been replaced with Lustrous Lagoon.

Despite losing its Spider-Man theme, Lustrous Lagoon is still a fantastic place to drop into, as it has plenty of places to post up for an ambush and a ton of loot, including a floating pirate ship with its very own vault full of goodies.

Lustrous Lagoon is also one of the few locations on the map where you can enjoy the new chrome features Fortnite Chapter 3 Season 4 has to offer. Chrome Splashes that will allow you to walk through vertical walls, Chrome Chests with extra valuable gear, and, of course, the EvoChrome Weapons. 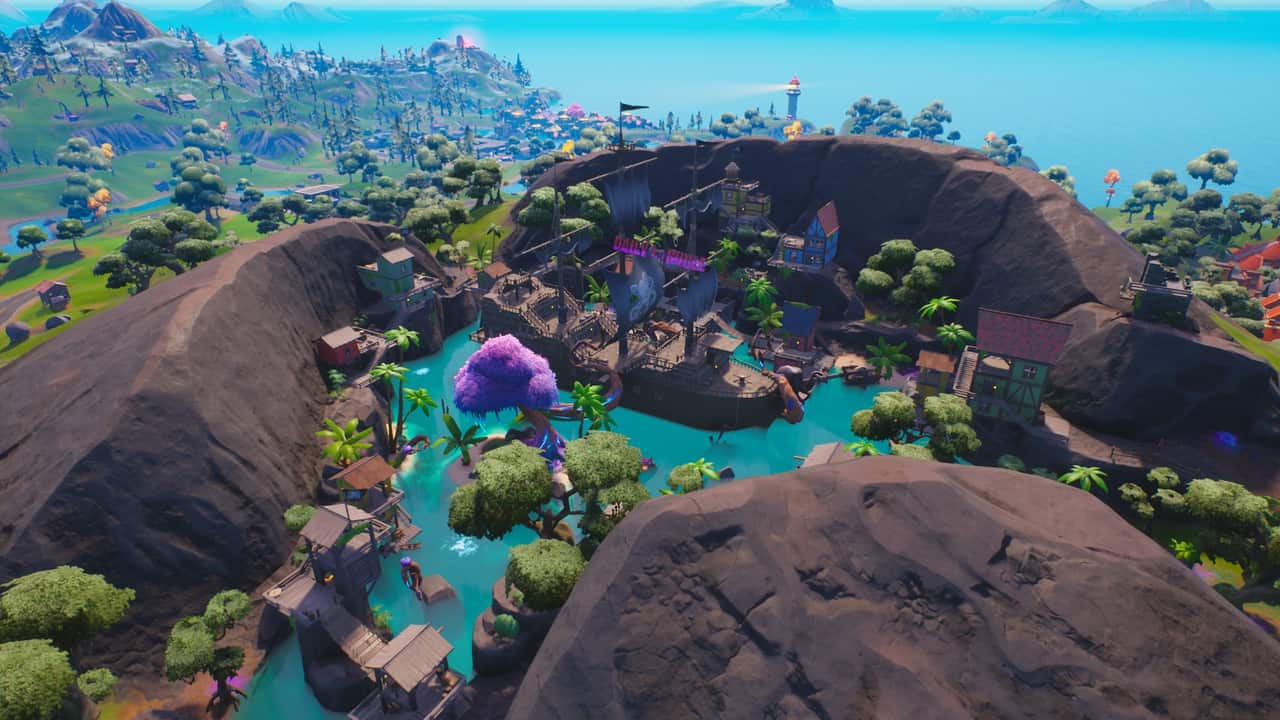 The latest Fortnite chapter has done away with the multiple residential areas of previous chapters, which were admired for the many closely-connected houses that could be sped through and looted quickly.

If you’re looking for that same kind of loot volume, you can set a waypoint for Sleepy Sound, which is just as descriptive of a name as any other Fortnite location. Sleepy Sound is a quiet little town by a lake that has plenty of houses that contain whatever you might need for a match.

Additionally, Sleepy Sound has plenty of options when it comes to vehicles for the rest of the match. Since it is on the water, there are plenty of boats to be hijacked, and if you prefer to travel by land there is always a wealth of cars and even a gas station to keep you topped up. 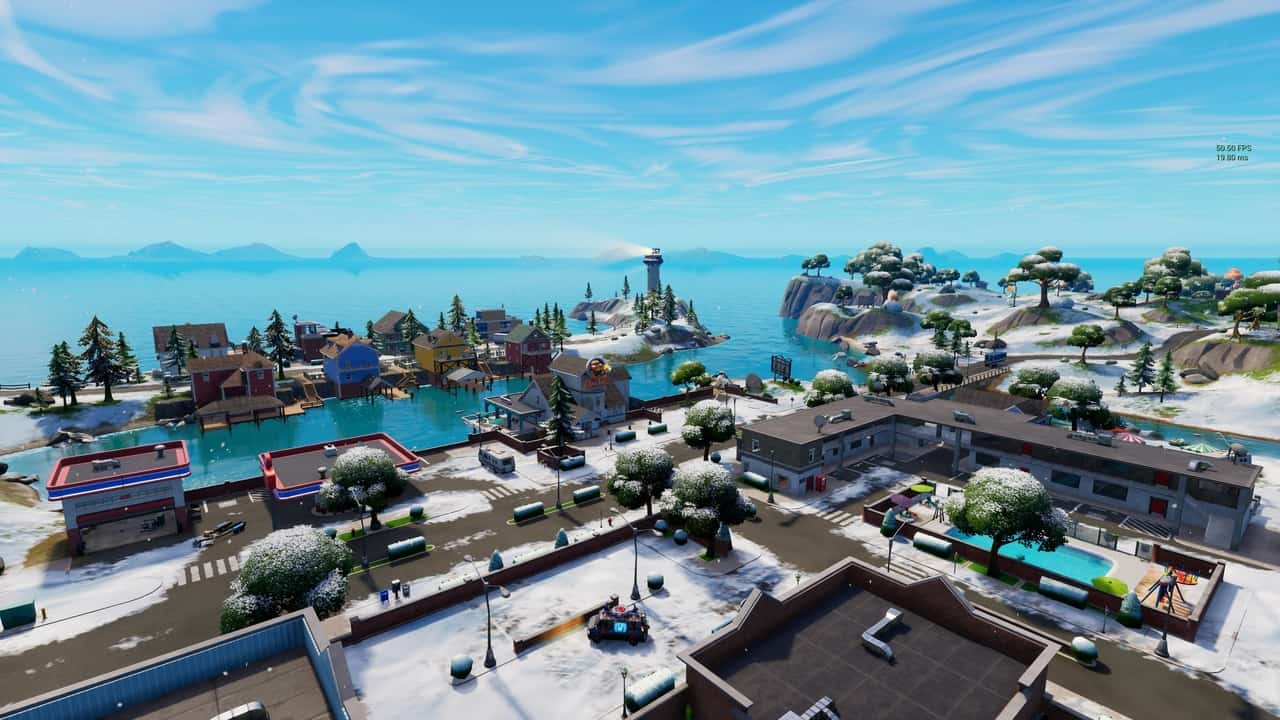 Ah, the infamous Pawntoon. This legendary loot boat makes its return in Fortnite Chapter 3, and it is just as helpful as ever. Like in its previous appearances, the Pawntoon contains bunches of Supply Chests that are all but guaranteed to contain great healing items as well as some high-tier weapons. The Pawntoon is also one of the most likely places you’ll score some rare weapons.

That understandably makes it difficult to pinpoint, which presents a problem for loot seekers. If you’re looking to land on the Pawntoon when you drop in, your best bet is to aim for the coastline and hope it’s near. It’ll never spawn in the bodies of water on the map itself. 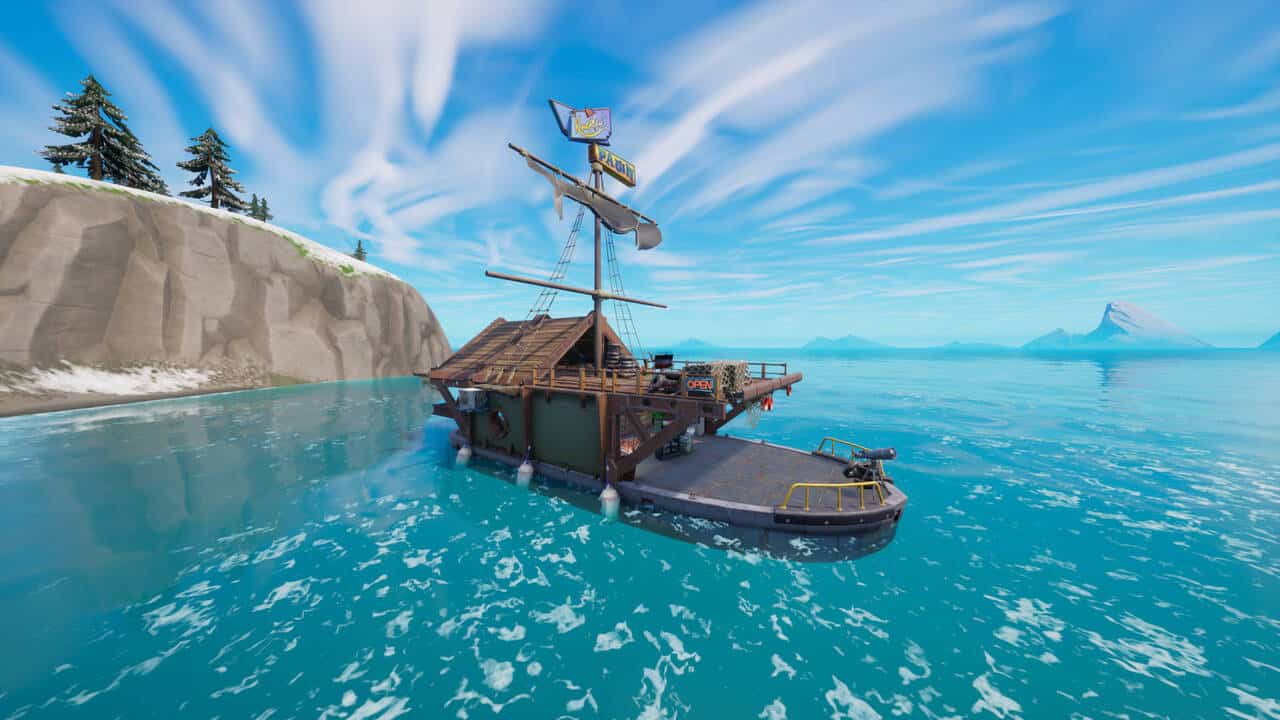 A location that has a great mix of loot, fun, and vehicles is Chonker’s Speedway. This offroad racing track is flanked by a complex of buildings with plenty of loot, off-road-ready vehicles, and a Seven Outpost with a vault just a short distance away.

You probably won’t collect all 43 of the chests that are around Chonker’s Speedway, but even a few of them will get you enough gear to load up for an intense match, and the cars at the location are ready for anything, so no need to worry about traversing some stubborn terrain.

Of course, you don’t have to do any of that at Chonker’s Speedway. You could just hop into those cars with your friends and race around the fully-functioning track until other players hunt you down or the storm swallows you up. 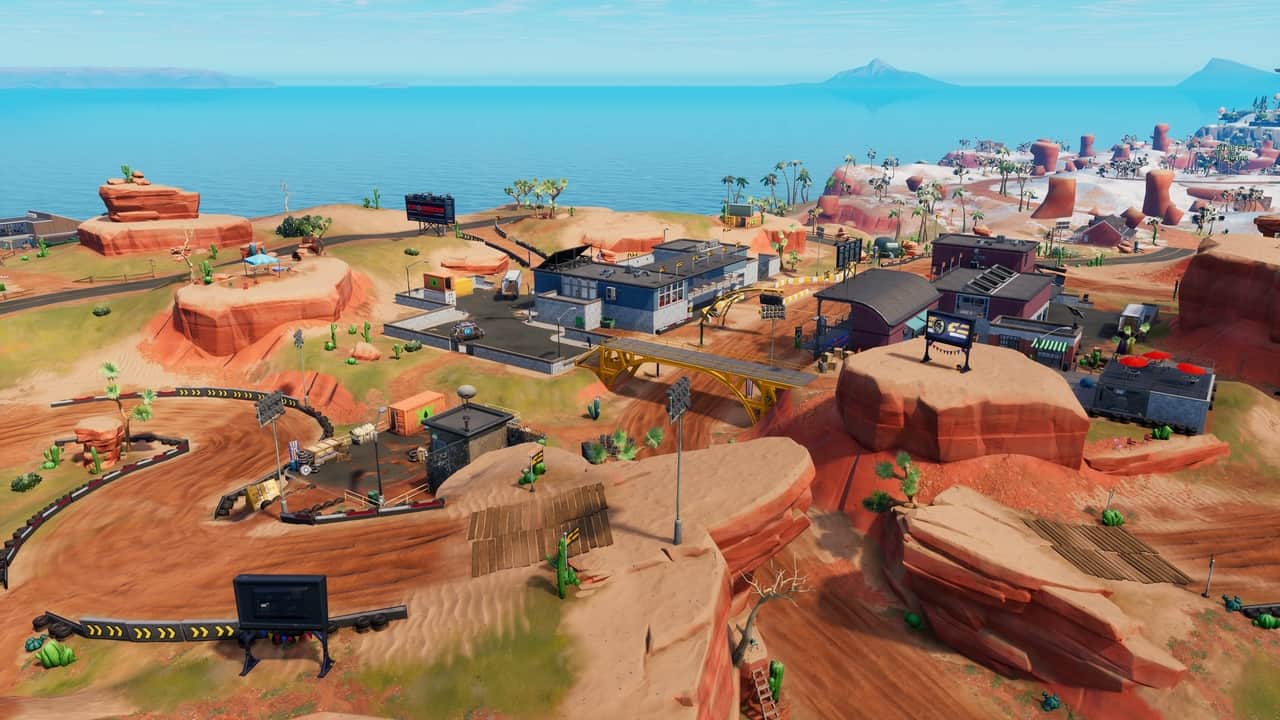 The Rave Cave was only introduced in the previous season of Chapter 3, but it quickly became a fan favorite. It has an undeniable party vibe with a fully-functioning rollercoaster, music, and Baller vehicles so you can live out your dreams of driving a deadly hamster ball.

But that’s not all, Rave Cave is absolutely stacked with chests, featuring 65 in total that are hidden throughout the area. That makes it one of the most loot-dense areas on the entire map. But because there is so much loot here, that means other players will likely seek out this location as well, which is where the plethora of high vantage points for sniping comes into play. There’s nothing like thinning the herd a little early.

The aforementioned Ballers also make for excellent vehicles to use for the majority of a match, since they can go about anywhere with minimal trouble. 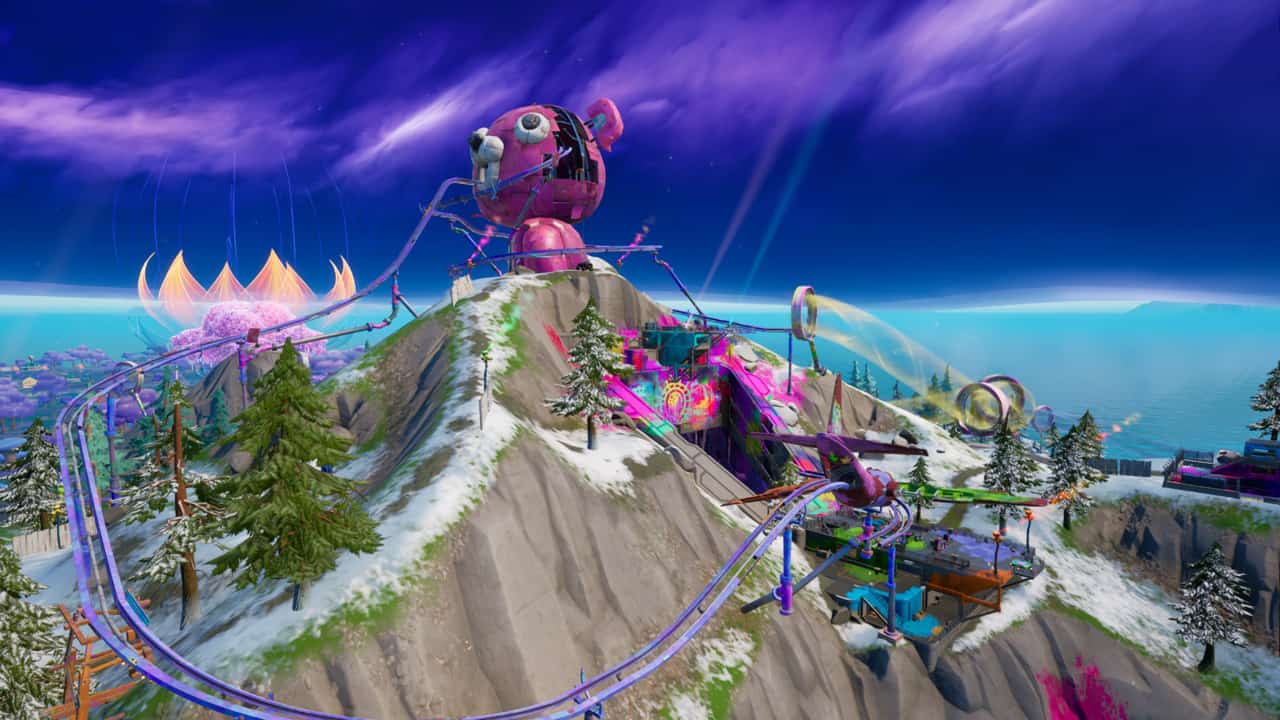 Another returning location from a previous era is Shifty Shafts. This location is not exactly packed full of loot, certainly not as much as Rave Cave or Chonker’s Speedway, but it is a great location to hide out and get some eliminations early if you know the layout.

Shifty Shafts has all three building materials in abundance as well, so dropping here can have you set for an entire match even if you’re a build-heavy Fortnite player. But be careful of the mines. They have some chests that can get you kitted out with some decent gear, but they are also a good place for other players to get the jump on you. We have a full guide covering the list of Fortnite’s best building tips. 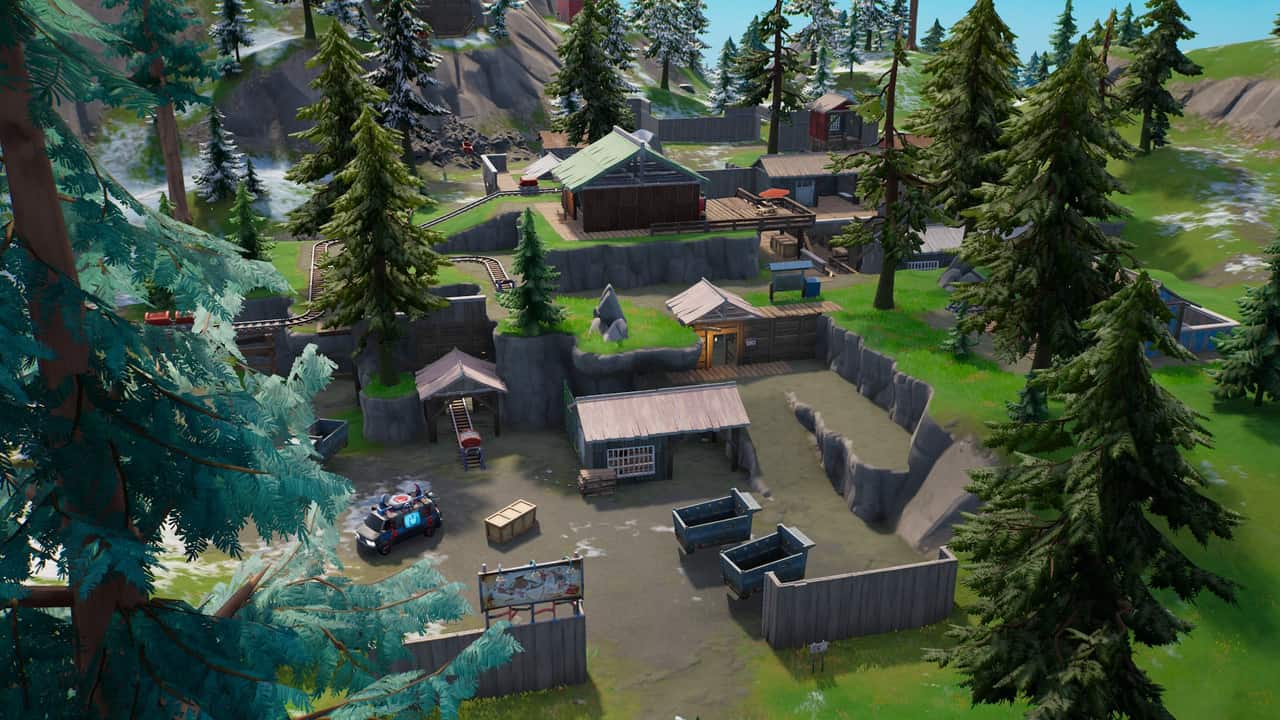