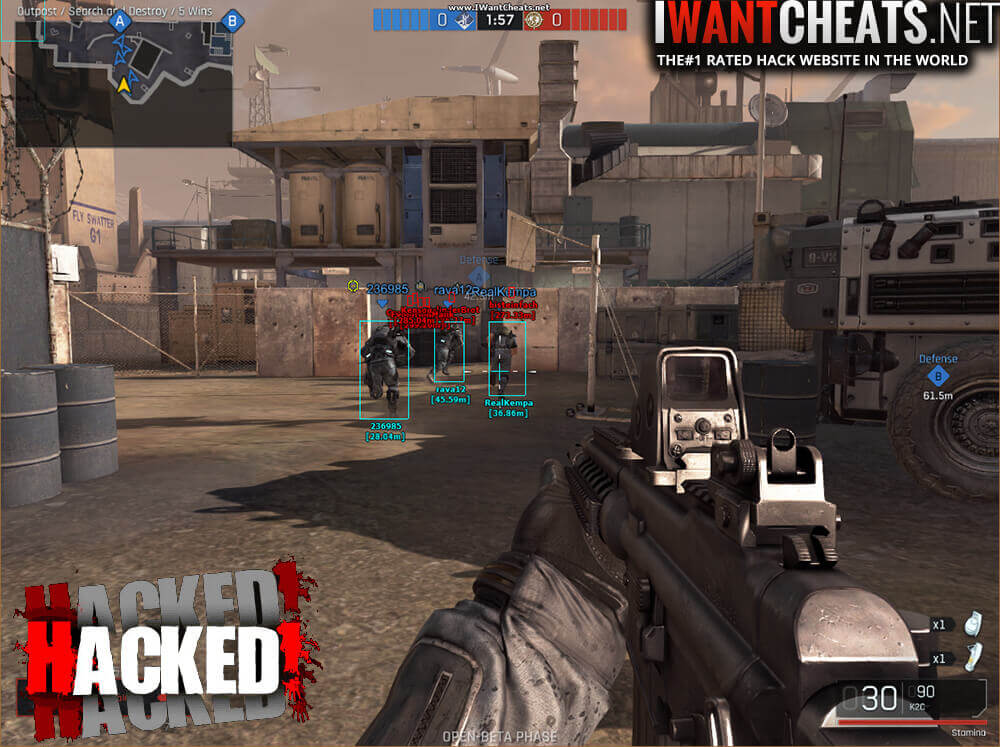 Yes, we have the first-ever Ironsight Hacks in the world, and they are undetected by the game anti-cheat meaning you can play safe. The video below shows you our Ironsight Hack in action, check it out! Ironsight is Free-to-Play and you can grab it on the official website.

You can download Ironsight for free on the PC and start playing right now without any money. The game is highly addictive and feels like playing an action-fueled game such as Modern Warfare 2 with game enhancements.

How Do Ironsight Cheats Work?

When you become a member at IWantCheats, you get instant access to the Ironsight Cheats, and you can start using them in minutes. When you go into a game, we show you the enemy on the map at all times. Check out the ESP below that surrounds every player so you’ll never be surprised.

When you head down a corridor or come around a corner, you can always see the enemy before they see you which gives you the added advantage. Don’t forget to use our new HWID Spoofer with Ironsight to ensure that your hardware ID remains undetected.

Will You Have an Ironsight Aimbot?

We already have a working Ironsight Aimbot, and we released it to our members. The aimbot allows you to lock onto any player and kill them instantly. You can tell from the video I posted at the top the Ironsight Cheat works great with the aimbot. We even included a silent aim feature that allows you to take out the enemy without keeping the gun on them (think homing bullets). Our Warzone 2 aimbot is just as accurate. Watch the video below to see Silent Aim in action, while the weapons firing at the ground it kills the enemy.

What Ironsight Hack Features are Planned?

Right now the Ironsight Hack has all these features in the works for our full release. We have a fully comprehensive Fortnite cheat solution that may be of interest to you with detailed information. 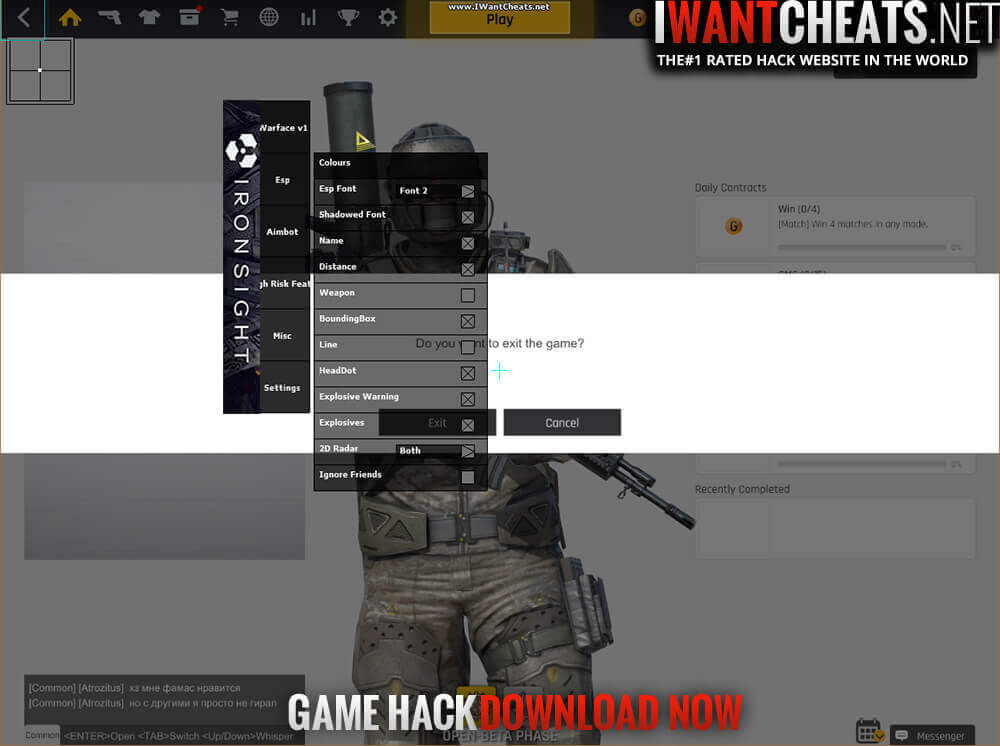 Ironsight Review
Ironsight is an online multiplayer first-person shooter game with a futuristic setting. It’s made by South Korean developer Wipe Games and published by Aeria a subgroup of the Gamigo group. The game feels a lot like other favorite military-themed FPS games such as Call of Duty: Modern Warfare and Counter-Strike, however, it has distinct segments which make it stand out, with its various gameplay modes. Ironsight has an active weapons arsenal, some challenging maps and impressive physics and graphics to amaze and astonish even the most avid gamers. The Open Beta version was made available on Feb 1, 2018.

Ironsight Story
The story is about an age-old conflict in the Middle East, its natural resources, and the Western control over it. The American presence in the region has caused a significant backlash from other contenders, Russia and China. Russia has established a TNC, dubbed the Energy Development Enterprise Network (EDEN), and employed the services of Private Military Companies (PMCs) to safeguard their interests in the region. Western governments have retaliated by hiring their version of private forces, which eventually worsens the area’s situation. Fast forward to 2023; a tsunami is triggered by a volcanic eruption near the Atlantic, which blankets the Atlantic coast and obliterates various nuclear power plants.

The USA has received a massive blow as a result of the radioactive spills, and thus their control over the Middle East has been debilitated. Handicapped and unable to control the situation alone, the USA and Europe have joined hands to establish the North Atlantic Federation, or NAF, in an attempt to calm EDEN and regain control of the assets. In 2025, NAF and EDEN initiate a war to secure control over the region’s ample resources. The conflict has spread like a virus across the globe, and all is dependent upon you as a PMC mercenary to choose a side and fight with your teammates to be victorious.

Ironsight Gameplay
The game has mechanics resembling any other FPS game, but it gains distinction with its smooth and free-flowing diverse gameplay. If you are skilled enough you will have no problems whatsoever with the game’s fast pace; players run around with the sole aim of shooting each other. There is also an emphasis on community, so you can join various clans, add your old or new-found friends on the messenger and share your strategies or merely chat along. The movement in the game is slightly lethargic compared to the Call of Duty franchise, which makes it feel more realistic like you are moving around an actual character. The shooting experience is steady with minimum recoil. 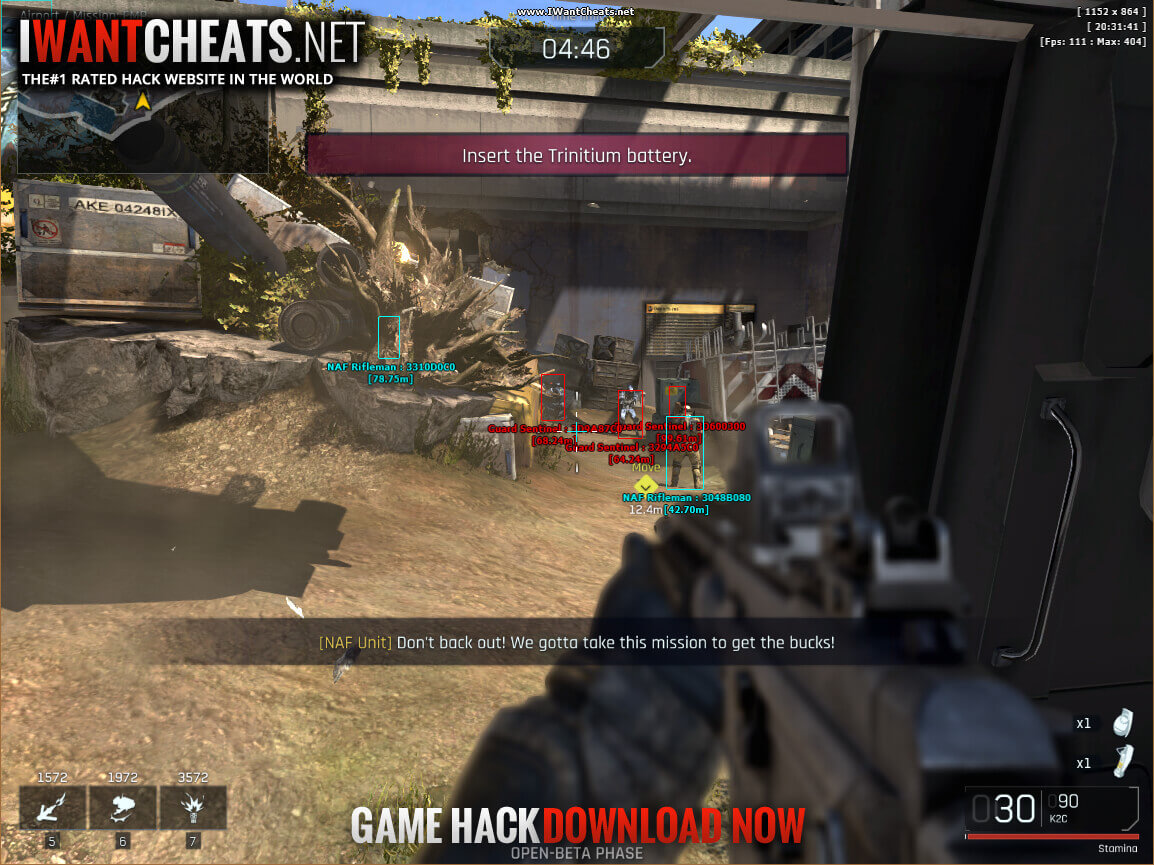 There is also regenerating health, so you can sit back and revive for a few moments before you are part of the action again. Ironsight stands apart from conventional FPS games because it allows you to respawn much quicker and places you back in the middle of the action. The game graphics are not the best in the world but still gorgeous. You will discover that the developers have given attention to detail, which is primarily evident at high resolutions. However, most players have little regard for the graphics as compared to the actual feel and movement of the game, and that is where Ironsight packs a punch. You will find close to no hindrance during your gameplay at lower graphics. The good news is, a high-end PC is not required. A decent and affordable system can quickly churn out 60 frames per second at a 1080p resolution and maximum graphical settings.

You can choose from different characters and customize them at your will, however, it will ask you to purchase extra character alterations and weapons available at the in-game shop, using in-game currency or real-life money. For this purpose, a chip system is in the works. You can buy more chips, using actual money, to use them in acquiring weapons and skins. Moreover, Ironsight entices you to play more as chips are awarded the more you log in, but you would have to play the game quite a lot to be able to afford some of the things available.

Otherwise, you can partake in daily missions and tasks to earn skins and buy weapons for your character. The fact that you are provided with both options and not forced to pay makes this game much more appealing. You can also get weapons and their attachments for free if you play with them and reach a certain level. Ironsight has limited services, so while you will have excellent experience in North America or Europe region, sadly you won’t be able to get an excellent connection playing in other countries. Other than that, servers are rock solid. On the positive, it is free to play FPS, so you don’t need a hefty budget to afford it.

Game Modes
The developers have included different game modes to appeal to the players, which you can select depending on your preferences.

Player vs. Player Modes (PVP)
Most of the modes in Ironsight are competition-inducing, meaning they challenge each player to do better than the other and reach their highest potential. Perhaps, the most famous among the PVP modes is the Team Death Match. The famous Team Death Match, commonly abbreviated as TDM, is played with the aim to kill every player of the opposing team. The winner is decided through a points system. It is enjoyable as it’s easy to grasp and execute. The more you kill, the better your chances of winning. 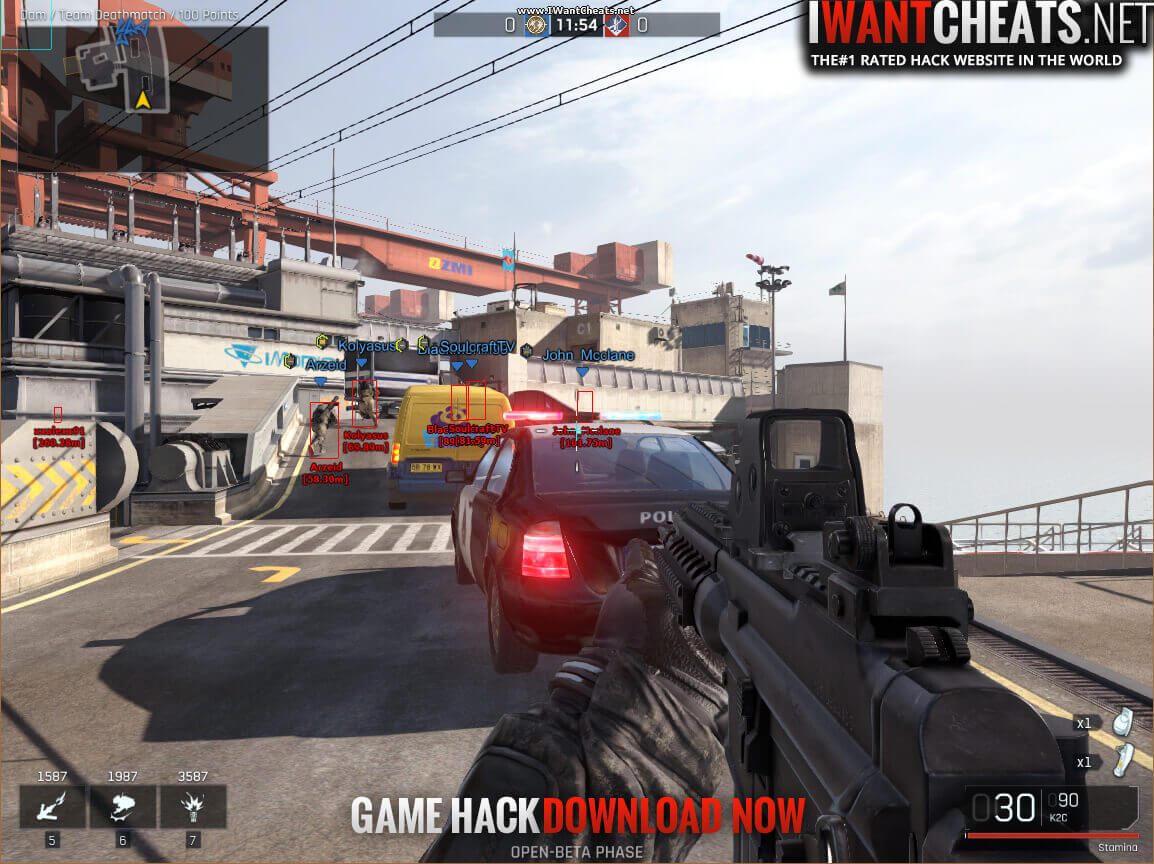 Search and Destroy
In this game mode, you will be provided two objectives; Secure or Destroy the two goals and you win the match, this sounds easy, but there are always players better than you waiting for your slightest mistake to overcome you. Other than these two, there are two more PVP game modes: Secure Point and Resource Takeover. Resource Takeover pits players against each other for resources and points. You can gather supplies by defeating Sentinels and the Metal Reaper.

Player Vs. Environment (PVE)
All the matches available under this banner will test and hone your skills against robotic and unreal opponents, also called AIs. The first one in the lot is Mission Tutorial. In Mission EMP, a simple task is provided where you have to destroy the Sentinel and then reactivate the EMP generator. To provide a learning curve, the AI Team Death Match has been formulated. There are two variants of this mode: Easy and Normal. You have to neutralize all enemy targets to earn points. You can fight against natural or normal AI to gain experience and get more proficient.

Ranking Battle
This gaming mode might appeal to many because of its setting. Here, you can participate in battles with other players, defeat them, and secure points, which will take you up the ladder on the worldwide leaderboards. These matches open on a regular basis so you can play and earn bragging rights.

MAPS
The maps of Ironsight are very well built; they are small and exact. You will not feel that the map is swarming with accessories or empty, which speaks volumes of the attention to detail. You will have ample space for fast-paced gameplay while having just enough obstacles and items to allow stealth by leaving a lot of room for sniping and strategic combat. 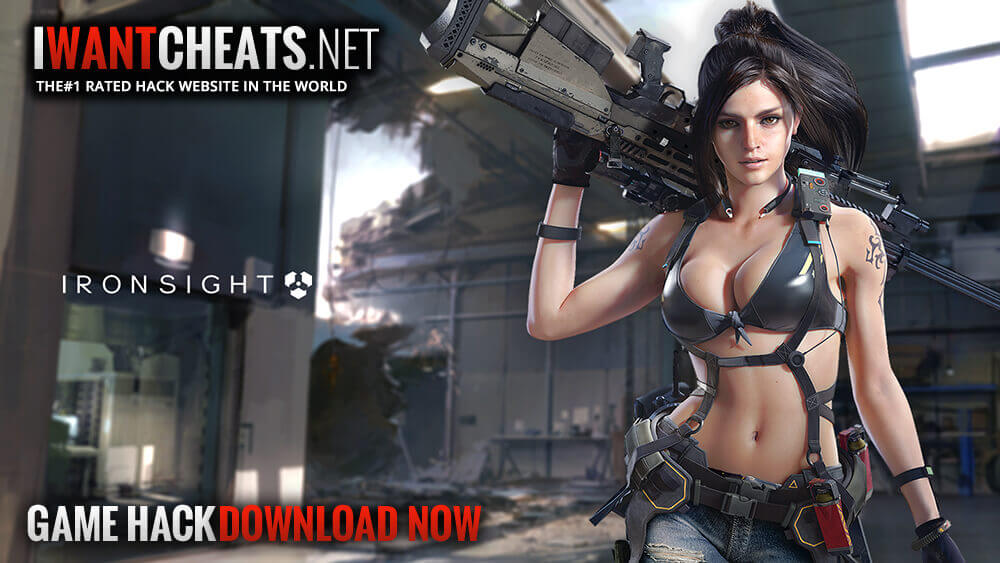 Challenging the players will be savvy weather maps. The weather conditions will change in some maps, affecting the gameplay, this might not sound significant, but when factors like fog start building up, your view gets compromised, which will challenge you as a player making the game much more exciting and unforeseeable. The game is still in its Beta state, so maps are limited, but the available ones can be modified. If you feel some section of the map serves as a disadvantage to casual, fast-paced gameplay, you can easily adjust that component by destroying it.

Weapons
The weapon choices in Ironsight are extraordinary. You can select weapons from an arsenal packed to the brim with different types.

With over 100 weapons, the combinations are practically endless. You will have a primary and a secondary weapon as well as the opportunity to call for support in times of dire need so that you can manage maximum points and kills.

Drones are also part of the game. You can summon a drone to aid you in attacking your enemies. The drone will close in on your target and attack it with its exceptional capabilities. You can choose an offensive drone like the Blade Drone, which when released flies up in the air and can be guided to crash into the enemy. It takes quite a lot of points to get these Drones. 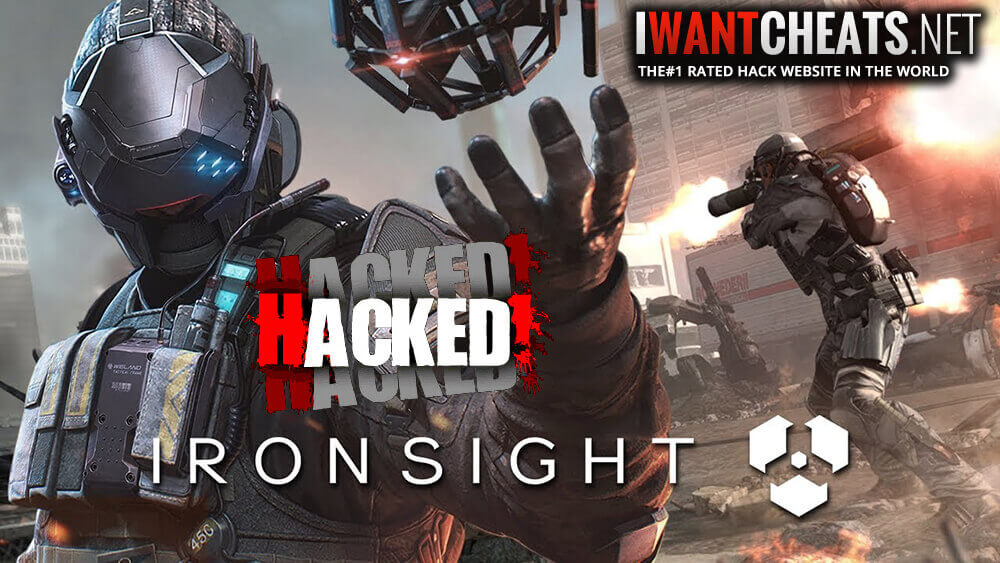 Conclusion
Ironsight delivers what one would expect from a high-budget AAA-rating action-packed thriller. There is no denying the attractive graphics, smooth gameplay, the availability of challenging gaming modes, and robust and diverse weapon arsenal.

All these aspects provide an enjoyable experience for any individual by pumping their adrenaline and enjoyment levels. Ironsight stands right to its claim of presenting a first-person-online-shooting game that fuses all the best attributes of famous and renowned FPSs such as Call of Duty Series and Battlefield series.