Are you looking for an undetected Paladins Hack?

IWantCheats has a new Paladins Hack released now for all our VIP users. This hack has over 40 features including Aimbot, ESP, Wallhack and it makes the game easier and more fun to play. You can win every round and always come in first, it’s the best way to play the game and makes it more fun! 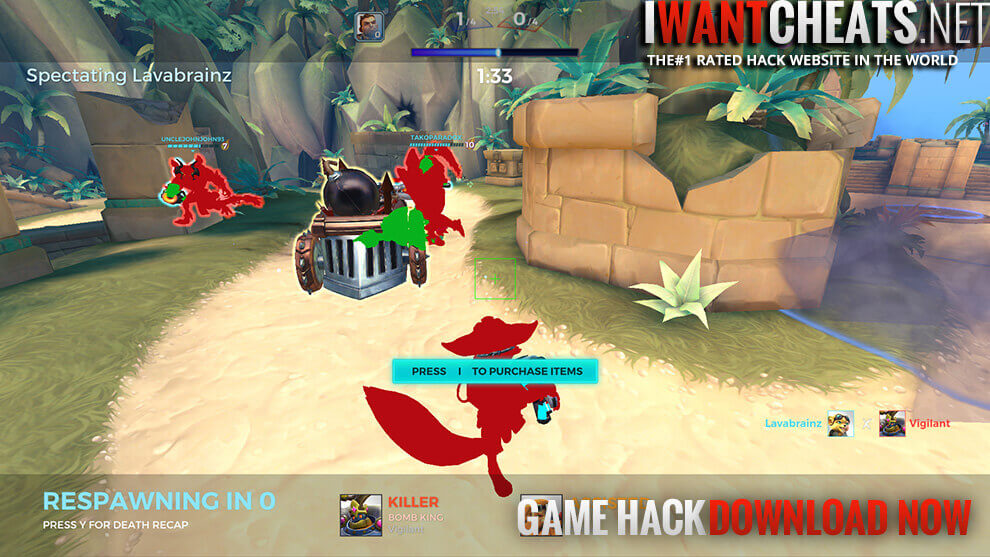 Does the hack include a Paladins Aimbot?

Yes, it does, our Paladins Aimbot allows you to lock onto enemy players with the press of a button. You can wipe out the entire team without ever getting killed if you want to rage or you can look legit and die some, it’s up to you. Once you sign up on our forum, you get instant access to the Paladins aimbot download. 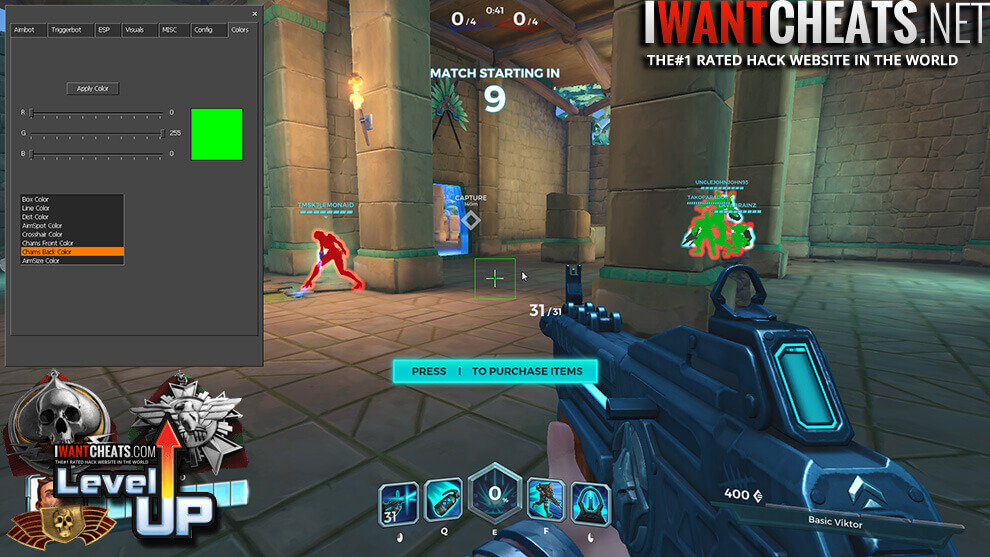 If you don’t like aimbots just use the Paladins Wallhack

Many players don’t like using aimbots and simply want a wallhack where they can always see the other players. Our Paladins Wallhack does just that; we make every player colored so they show up and you can always see them behind any object. Check out the picture below for an excellent example of how this works in the game. You can see the colored players that show off our Chams and ESP. 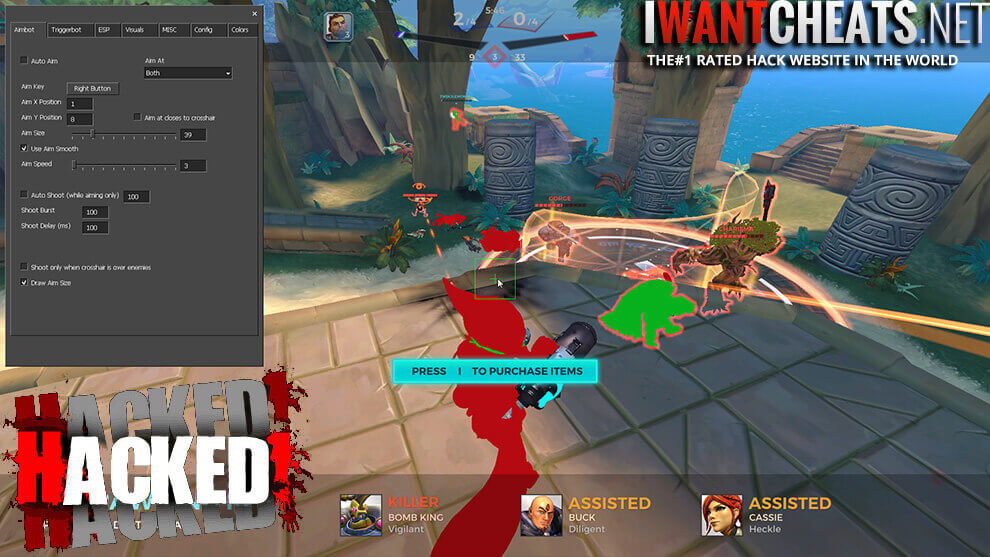 The entire process takes a few minutes, and you can instantly download the Paladins hacks once you become a new VIP member, these are the steps to sign up.

Also if you don’t have the game download it at the Paladins Champions of the Realm website, then head over to the Paladins Reddit forum for more information on how to play the game. 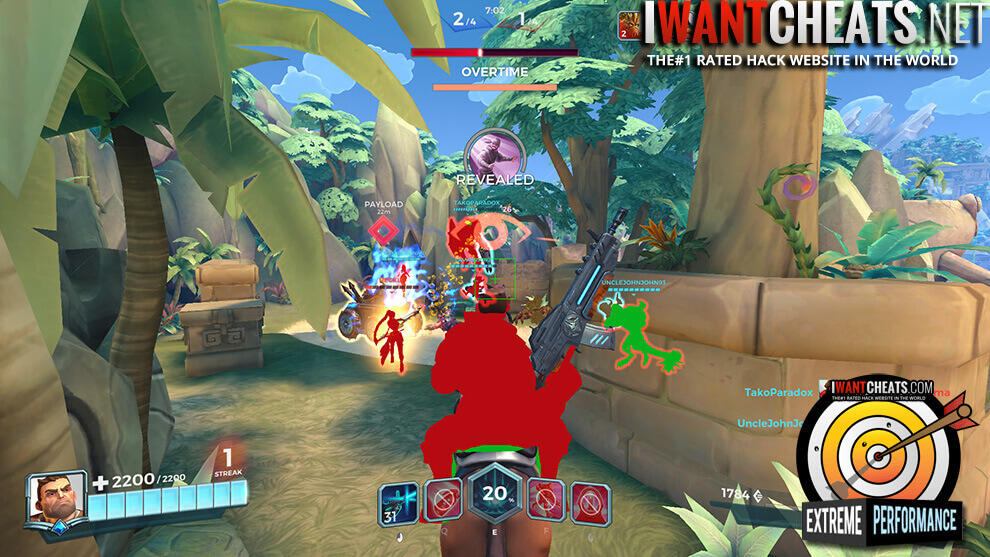 Paladins: Champions of the Realm Hero Based Team Shooter Game

Developed by Hi-Rez Studios, Paladins: Champions of the Realm is a hero-based F2P team shooter game. It is about fighting with the other teams to meet objectives. Players can choose a variety of champions to customize the playstyle with items and cards. The game got available as Open Beta on September 16, 2016, for PC and Steam. A beta version is also available for PS4 and Xbox One gaming consoles, at no cost.

Storyline
Paladins: Champions of the Realm is a new team-based shooter. It is by the selection of a variety of heroes to fight and achieve objectives. Start combating in a 5×5 match by choosing one of the most colorful characters available in the cast. You can customize characters by enhancing their abilities with the help of an extensive card system.

You need to secure the objectives by working together with your team. Win a round by escorting a cart to the opponent’s base. The team scoring 4 points wins the game. You can further customize your hero by buying currency items earned in each match. Rank your heroes by entering in a competitive play and test your game skills. Your ability to work with other players and making runtime decisions will result in either winning or lose a game at your end. Having a hard time playing Paladins? Just download our Paladins Champion of the Realm Aimbot and win every round!

GamePlay
Hi-Rez Studios’ has taken on the genre of arena-battling by combining the signals of multiple games to turn them into a medieval style gameplay. The gameplay has a lot of similarity with Overwatch and Battleborn. Paladins is about wrecking your opponent, taking over a siege engine to lead yourself to victory. Many people are searching Google to compare Paladins vs. Overwatch if you played either game you’d enjoy the other one as they are very similar. 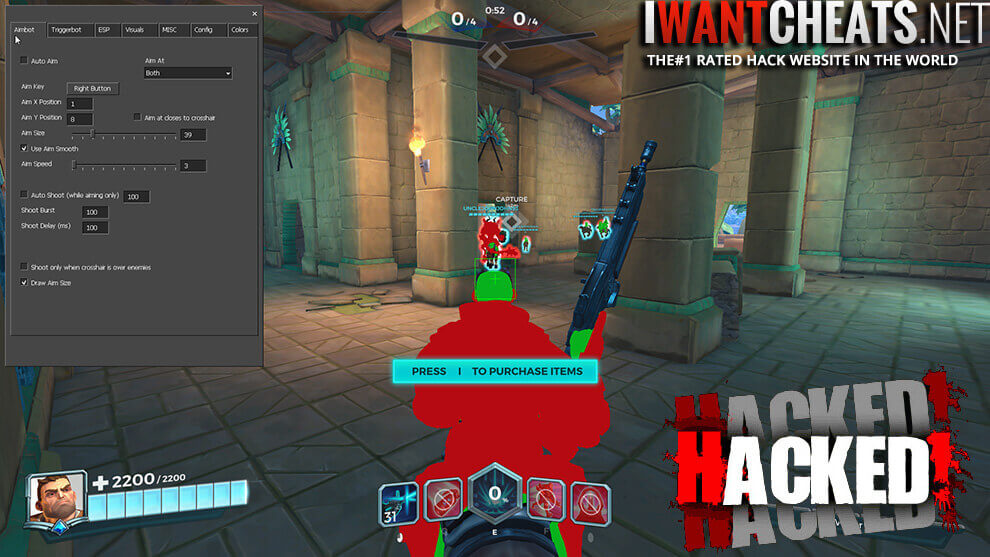 Different Characters
Every character in the game has its play style, weaknesses, and strengths. The playing skills are customized with various passive effects. The team securing the points takes over siege engine to strike at the enemy doors for securing victory.

Fast Paced
The gameplay is quick and exciting. Most of the combats take place on siege engine. The characters have multiple abilities to get in and out of trouble quickly. Every match in the game takes 15 minutes without any downtime. You will need to be continuously on the move to become a champion of the realm.

Three Game Modes
Paladins: Champions of the Realm gives a friendly introduction to fantastic background music. It offers an easy decoding guide to help you understand the game’s basics. The storyline is quick and helpful. There are three game modes. However, only two gaming modes, Practice Mode and Casual Mode, are currently available. The third game mode, Constructed is still locked.

Selecting Your Champion
After the match starts, you will get a choice to choose from 8 champions, each having unique skills and weaponry set. There are ten people in a game, five on every side. Select your champion quickly. Each team allows only one champion. Choosing different characters will make you learn about their playing skills.

Game Mechanics
The game mechanics are simple. The mouse controls your view, and the left mouse click is used to fire a weapon. You will have three primary abilities as a player with fourth being your mount. The cards you obtain in the game will work to enhance your skills and weaponry. You can apply for these game cards on every level; however, they will reset at the start of every new match. On leveling a match, you will be offered three randomly chosen cards. You can select whichever you think would help you best during the battle. These simple game mechanics will quickly get your attention. 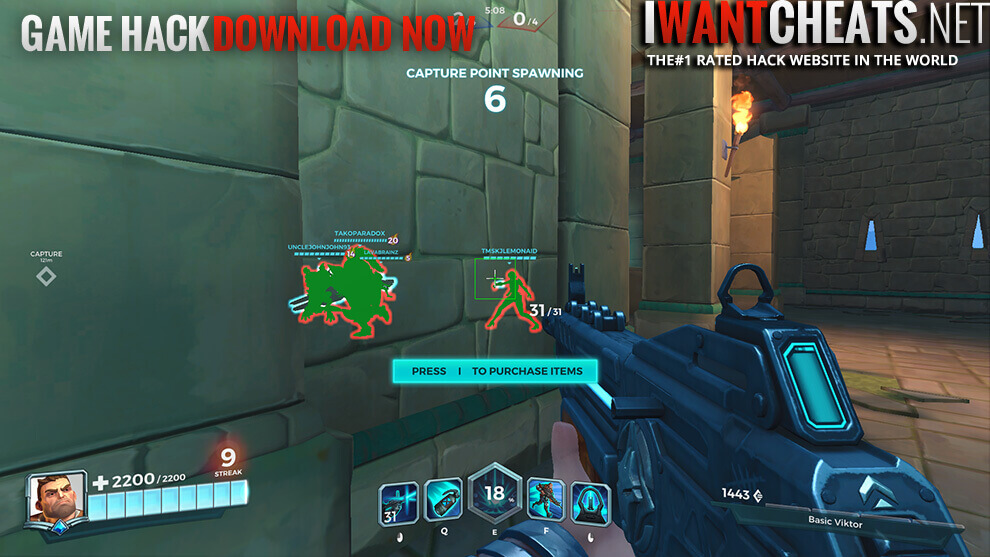 Game Tactics
Like other multiplayer fighting games, you have to wait for the opening of the capture point. On opening, ride out to meet the objective. There is a siege engine which allows you to capture and brawl at the opponent’s base. Repeat these steps multiple times to reach your enemy’s vault. Blow up the enemy’s vault to win the game. Keep in mind that only one siege engine spawns at a time of capturing the point. Make sure to seize it for destroying the enemy.

Game Highlights
Paladins give you a fantastic chance to enter a world of fantasy. Explore the unique collectible card system to amplify and augment a character’s core abilities and play like a champion. Let’s have a look at some of the exciting features and highlights of Paladins.

Team-Based Gameplay
The gameplay depends on teamwork. Participate in 5v5 matches to make strategic use of every player’s unique abilities and weapons.

Earn Cards
Paladins: Champions of the Realm offers some valuable cards to boost your character’s skills and weaponry. Customize your play style by earning these game cards. 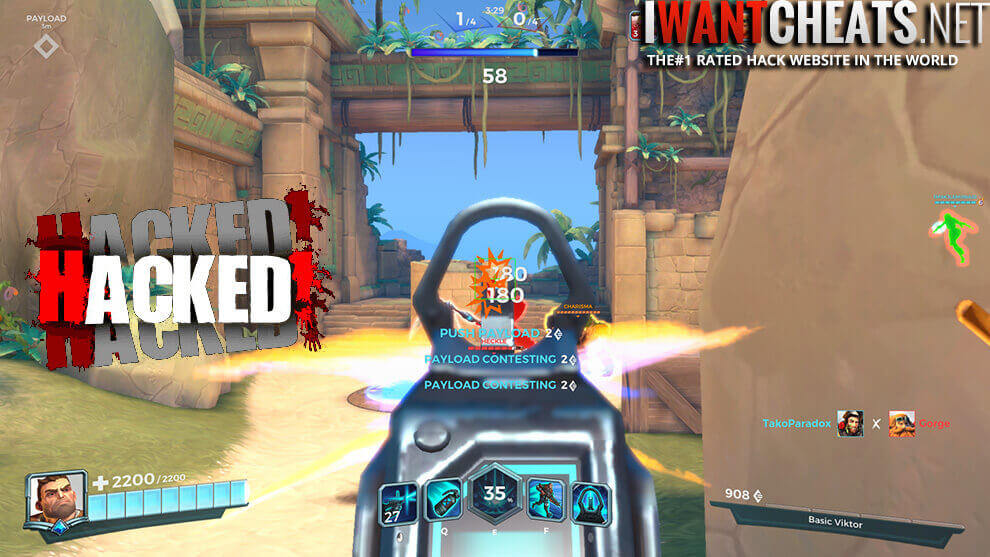 Aesthetics
The game features colorful and eye-catching aesthetics. It runs without error on modern computers.

Items
Earn game currency by fighting with enemies. Secure the objective to buy items and further enhance your skills.

Map
The game’s map has a repetitive design, but you will get familiar with it after playing 2-3 combats.

Fantasy World
Set in the fantasy world, Paladins features a diverse cast of Champions. From sharpshooting humans, mystic elves, mech-riding goblins, bomb golems to jetpack-clad dragons, it boasts everything. Each champion is equipped with a unique ability set to add excitement to the game. New champions are regularly added to Paladins.

Free-to-Play
Paladins: Champions of the Realm is 100% free-to-play. You can enhance the gameplay experience by unlocking cosmetic items through a purchase.

Card Mastery
You can collect unique cards for each Champion; this helps to build decks to empower the personal play styles. Start with an essential collection of cards and play along to unlock more cards. You can tweak the decks in-game with Burn cards to counter opponents’ strategies. 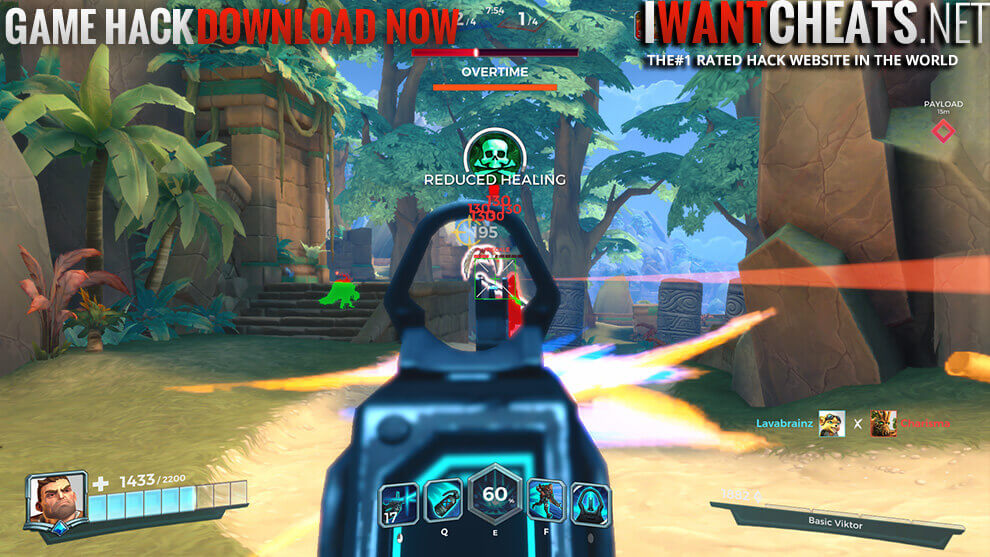 Level Up
You will gain experience playing Paladins regardless of your approach. Level up your account, complete the daily quests/achievements to get the Radiant Chests and Gold for unlocking additional game cards, weapons, and costumes. Playing against more players will sharpen your skills and make you a true Champion.

Game Controls
You can play Paladins from FPS perspective. The game controls are easy to understand for beginners and experienced players alike. Play either with a controller or keyboard and mouse.

Why is Paladins Available in Early Access?
The game developers are working closely with the game community to turn it into a great game. The game’s availability on Steam helps to incorporate additional features to make it more attractive. 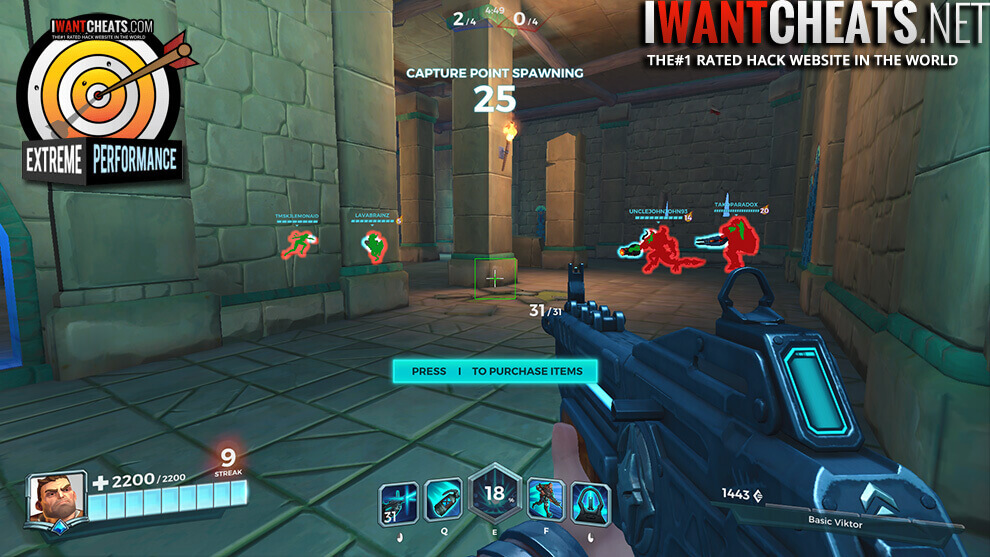 How is full version different from the Early Access version?
The game developers are adding a bundle of features to make it more attractive. You can expect new Champions and in-game content with the release of every patch.

What is the current status of the Paladins Early Access Version?
Paladins Champions of the Realm is available in Beta version and is improving on player’s feedback and ideas. The game will continue to evolve over time.

What will be the price after Early Access?
Paladins Champions of the Realm will always be free to play.

Graphics
Paladins: Champions of the Realm uses 3D game graphics engine to feature colorful characters. The pleasant soundtrack captures your attention right from the start. However, the map has a repetitive design and requires improvement.

Verdict
Paladins: Champions of the Realm is simple but diverse with a friendly game atmosphere. There are enough characters in the game to offer a variety in the gameplay and grab your attention. The pleasant soundtrack, simple game mechanics and colorful characters all add to the style of the game. The development team is working to add more maps and cards for each champion in the future updates.