IWantCheats has the first-ever Post Scriptum Hack released to the world! Now you can find every player and item at all times.

Use Player ESP to see every enemy player on the map, even when they hide behind objects.

The Post Scriptum Hack allows you to have the advantage of knowing when someone is close by so you always get the kill.

Check out how amazing the game in and watch the Post Scriptum Trailer below.

Never worry about getting banned using our Post Scriptum Hacks we have three layers of advanced hack security to keep you safe.

Our mod team uses the Post Scriptum Hacks daily and plays more than anyone else to make sure you never have an issue.

If the game updates with a patch or new content our code team gets a new version out to you on the cheat loader in minutes. 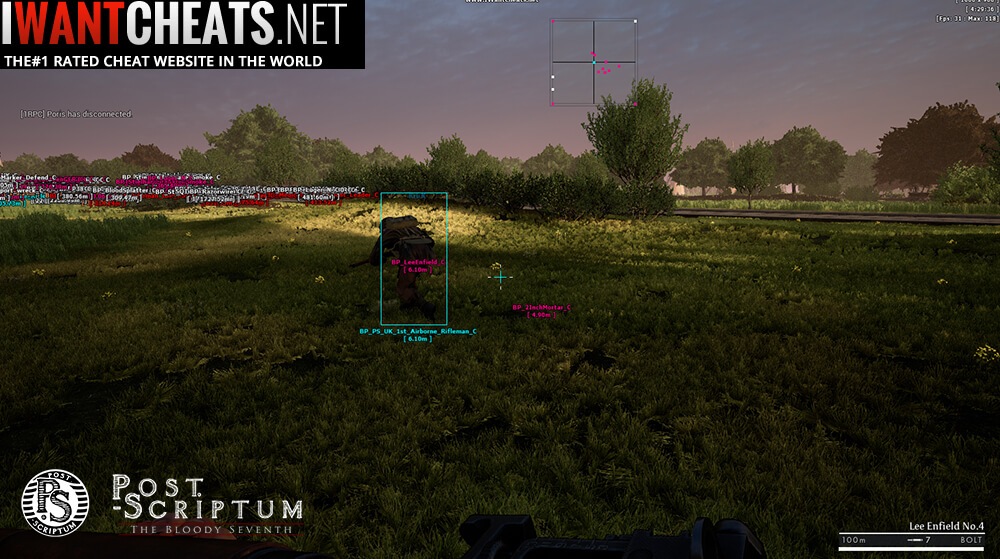 We give you a mouse-driven Post Scriptum Cheat menu that allows you to turn things on and off or adjust values during gameplay.

You can set the cheats up precisely the way you want to help you win every round and won the battle! 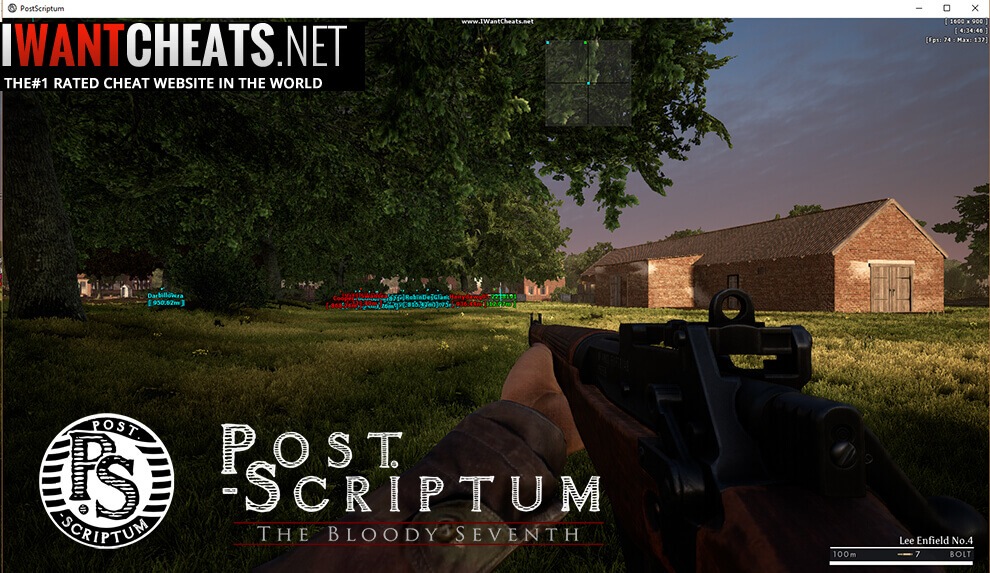 Yes, the cheat comes with our Post Scriptum Aimbot that views the battle in 360 degrees meaning nobody can surprise you from behind.

Setup the aimbot key to a keyboard key or the mouse and push it down to lock on and fire to take the enemy out.

We even offer visibility checks and auto change targets with our aimbot. 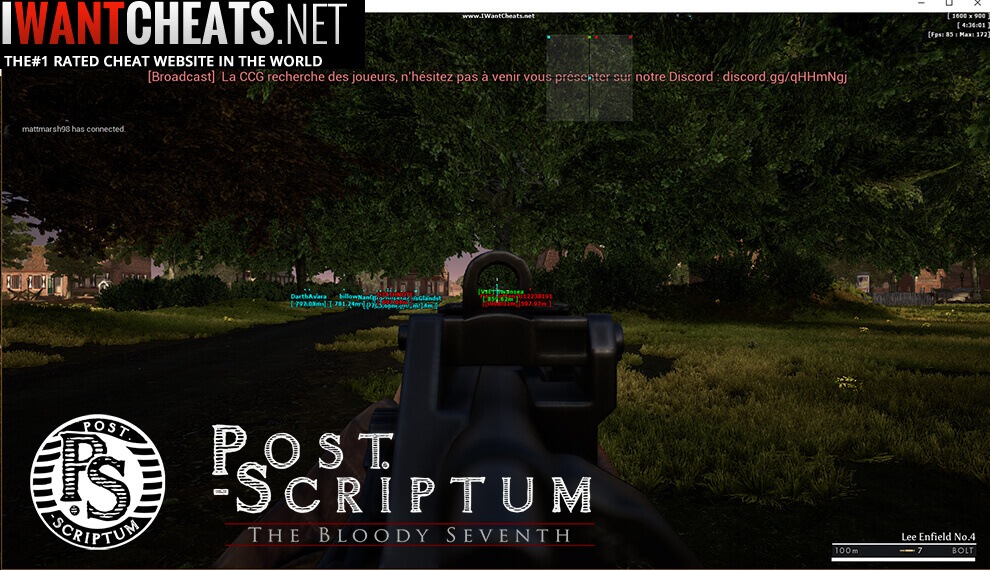 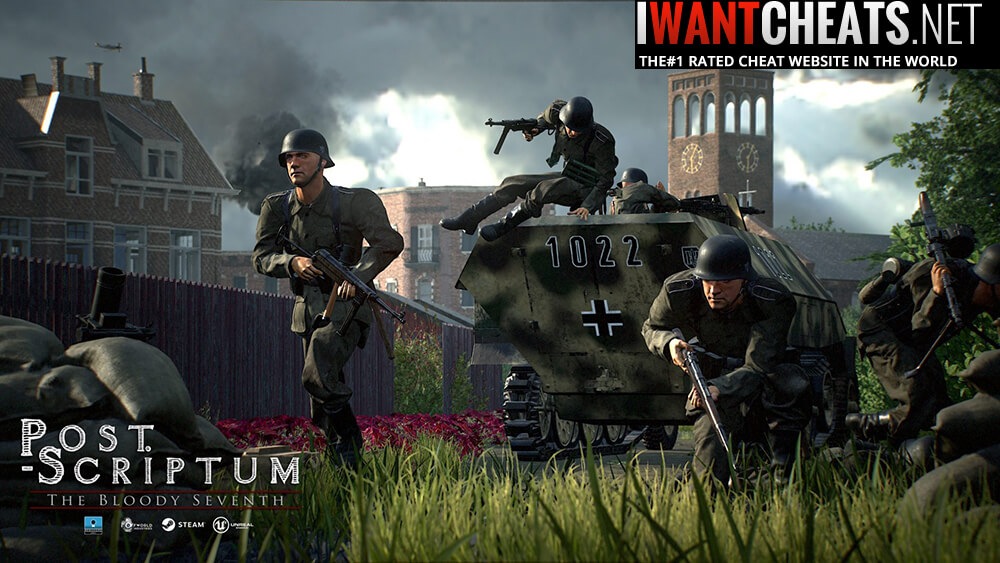 Post Scriptum Review – Everything You Need To Know About

It pertains to the great ‘Operation Market Garden’ event offering thrilling gameplay crafted for a memorable and brilliant gaming experience. This favorite WW2 simulation game is all set to impress gamers across the world with its recent release on the 18th of July 2018.

More exciting updates are to be added with time as per the announcement by its developers, Periscope Games. The title’s backdrop reflects an intense WWII battlefield setting focus on large-scale wars, teamwork, collaboration, and strategic planning including historical precision and a challenging learning curve.

Post Scriptum requires players to fight against ruthless foes and opponent teams in a heated simulated WW II battlefield with the aim to take over essential sites and achieve challenging milestones at each stage.

Similar to Battlefield V, another favorite multiplayer title based on the first-person shooter scenario with a historical battle-play backdrop, Post Scriptum focuses on a more realistic and closer to life experience for the events of ‘Operation Market Garden’ occurring within the towns and battle arenas of Holland.

World War II Backdrop – Realism & Accuracy
Developers initially named the project ‘The Bloody Seventh’ to reflect the efforts and struggle of the British soldiers during the war period and to highlight the harsh elements of those times that these paratroopers had to bear while in wait of their partner flanks to create the favorite Lower Rhine link. 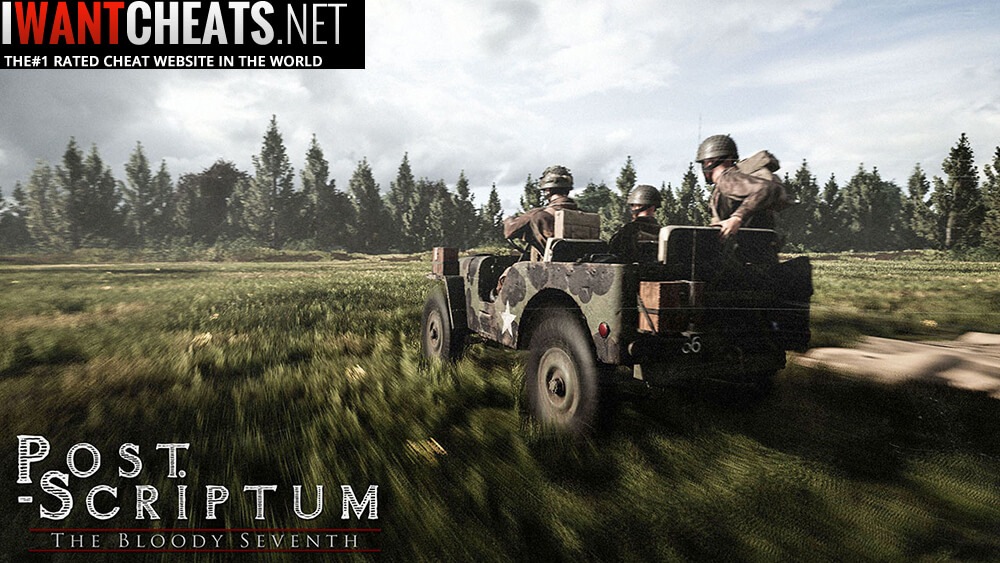 The high tech graphics and cutting-edge technology like SQUAD (Unreal Engine 4) offer an amazing and a realistic WWII experience where players move through various locations on the game map, traversing great battlefields and running through wood shacks, farmhouses, and rural/urban settlements in a simulated Battle of Arnhem scenario. The gaming enthusiasts who prefer battle-play and first-person shooter celebrated sagas will instantly take a liking to this action-packed title.

Using specialized technology to simulate historical events with high accuracy, the developers have taken gaming and visual effects to an entirely different level. Areas like streets, villages, and aerial sections have been recreated with the use of high-end graphics to infuse more realism. Players will actually feel a part of the WWII Battle, as they play on to take down enemies and complete gritty missions as part of the War Campaign. 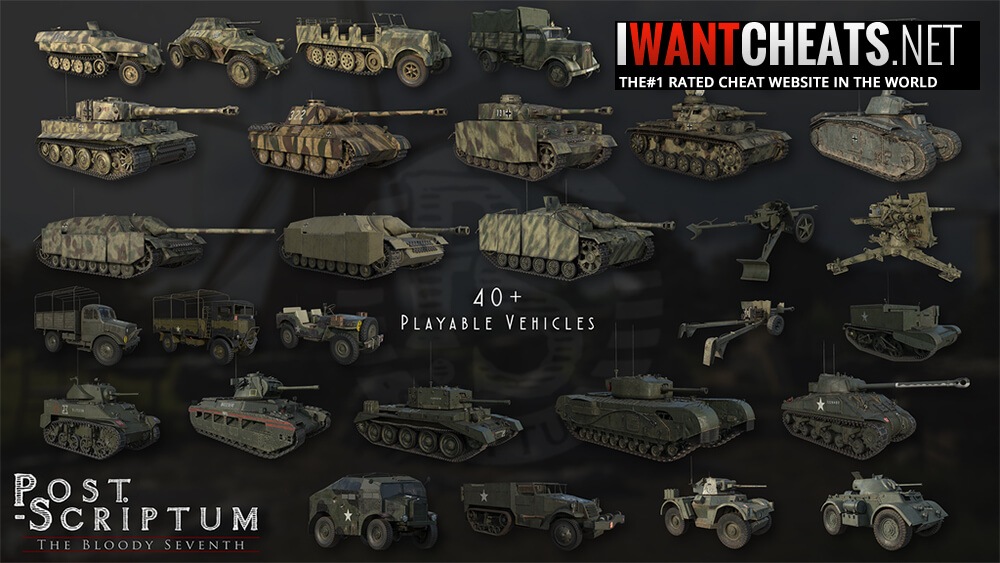 About the Developers
The game has been crafted by Periscope Games who are focused on providing a unique, innovative, and more diverse gaming experience through gamification that entails grandeur, realism, and high user engagement. The developers have future plans of adding more exciting content to the game, post its launch, with a focus on innovative gameplay features, new modes, and map layers. Currently, Post Scriptum has been designed to include an exciting and comprehensive WW2 setting for SQUAD along with character customization features and exciting game modes.

GamePlay: Full on WAR
The gameplay for Post Scriptum thrives on a full-scale WWII battling environment with 50+ available vehicles, Squad roles, 100-Player Game Servers, Base building, and additional supply runs. As highlighted earlier, the gameplay is primarily based on recreating the Battle of Arnhem where players from all across the world join teams to take on the roles of exemplary military leaders in the German and British Brigades. With a battlefield spanning 140 km² of playable area, Post Scriptum includes 5 maps with historical accuracy and multiple locations recreated through aerial pictures and archives that the players have to traverse to win this much-hyped title. Work in collaboration with your team and use specialized weapons and vehicles to simulate the historic battle in Holland. 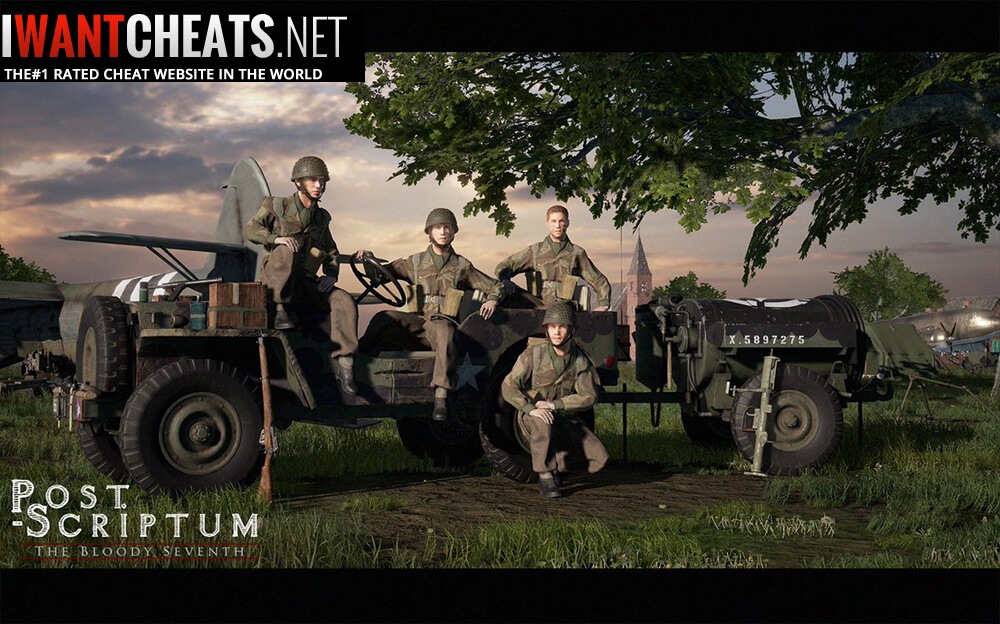 KEY FEATURES
The multiplayer saga by Periscope Games promises to be a thrilling ride with unique gaming elements that are bound to keep players glued to their screens pining for more playtime. Players can enjoy playing three different game modes titled “Offensive,” “Stratagem” and “Sandbox.” Aside from a realistic and more accurate WWII battlefield, 5-maps based large play area, specialized weapons, and customizable characters, the title includes the following features:

• Large-scale battle-play with 50 v 50 players that will be seen fighting on foot using artillery, shooting with machine guns, operating tanks, gathering armor, and completing challenging missions.
• Specialized weapons and defense accessories like 50+ available vehicles that include heavy tanks, jeeps and a plethora of remodeled automobiles. More than 40 authentic weapons like pistols, bolt action rifles, machine guns, binoculars, canteens, and shotguns.
• The players will have access to a comprehensive tank model where vehicles can be customized using parameters like armor thickness, internal damage, impact, and turret speed.
• A Commander Mode where you take on the role of a leader to rope in soldier support including access to heavy artillery. Players can enjoy bombing runs and be strafing while instructing flanks to meet targets.
• Supply, logistics & Base building where resources are used to construct structures and fortifications like camps & barricades for defending against enemy attacks. Supply runs to help strengthen the defense base and enhance your ammunition.
• Multiple user modes where players select their playing mode including a medic, tank crew, leader, and MG. Provide some medical assistance to their teammates as a medic or help put off the suppressive fire with the MG model. As a player, you can take on the leader’s role and command the squads to accomplish different tasks and achieve essential objectives.
• Tactics Based Gameplay that requires you to build strategies and execute them effectively to meet challenging targets like capturing sites and destroying the enemy’s artillery camps to emerge victoriously.
• Post Scriptum includes multiple dedicated servers that offer support for 100 player gaming in an action-packed, challenging PvP environment. The developers have plans for providing both Official and Private dedicated server hosting.
• The use of SQUAD technology and high-end visual effects that offer a realistic and grander WWII experience with gaming elements like all stages, outfits, weapons, and locations recreated from original sources.
• Post Scriptum comes equipped with a Source Development kit for gaming enthusiasts who would like to add, modify, and create exciting content such as new mods for the game.

Post Scriptum includes the Commander, Objectives & Sections modes with the option to choose from a horde of playing roles like Machine Gunner, Medic, or Tank crew to accomplish essential objectives. With a life-like action-packed the battling arena, you will have fun participating in an all-out-war combined-arms campaign where tactical planning and teamwork will help your team move on to exciting new stages. Collaborate with your team members and gather the necessary control points to strengthen your flank and gain the ability to accomplish gritty challenges. The game includes sections like Infantry, Armoured, or Logistics, each having its own specific roles and responsibilities that you can choose to be a part of. Sections can make use of props like waypoints and in-game voice interaction to collaborate and coordinate on aspects like base building and the sectors to attack etc.

The title includes a cornucopia of other noteworthy features that include the following:
• A 40 vs. 40 multiplayer PvP battles with the aim for a 50 vs. 50 PVP
• Parachuting for some battling action and intense war play
• Photo scanned 3D Military outfits/uniforms
• High support for Heavy Artillery and Airstrikes
• Use of military archives and historical maps that define an authentic level at a 1:1 scale
• Use of original sources to recreate historical vehicles, famous landmarks & weapons
• A towing system for supplies used for fortifications
• In-game Voice Over IP featuring proximity fade
• Multiple modes like Sandbox game mode that has user-driven objectives
• Complete access to PS SDK (development kit) to add or modify mods
• Support for Steam Workshop
• Famous landmarks like the entire western area of Arnhem in 1944 and Arnhem city center with its famous faraway bridge

Playing Tips
In Post Scriptum, you are required to be patient, vigilant, and proactive throughout the gameplay to help increase your chances of gaining victory. The essential skills needed to achieve an edge in this intriguing multiplayer first-person shooter title are tactical planning, teamwork, communication, and vigilance. Additionally, you need to be cautious and proactive to foil the attempts of your opponents and ward off any attacks that might have you at the losing end. Keep the tips highlighted below in mind when playing Post Scriptum.

• Pay attention to the squad leaders and show obedience, as this will help you meet gritty targets with ease. Commanders provide the necessary guidance that will allow you to gain more reward points and complete missions easily.
• Use a mic for in-game voice communication and be sure to use it for calling out enemy targets, giving bearings, pointing locations on the map, and giving instructions.
• The gameplay is based on teamwork and collaboration, so if you think playing solo would be more fun, that’s not true. With an intense WWII battle play, you’ll be expected to perform as part of a squad and work together with team members to meet defined objectives.
• As soon as you enter the battling arena or the first stage, try to get familiar with your surroundings and how things work before you jump into commanding an entire squad or shouting instructions to a flank. Work your way up and get some gaming prowess before taking on the role of a Squadron Leader.
• Always take up the medic roles because it’s crucial to fill up these roles ASAP to keep your flank well prepared to take on more massive battles and fierce opponents. Do not lead a team with a medic’s role and fight when required mostly taking up position behind the front line. Try to use a local team/squad chat to notify your team members about locations not worth attacking etc.
• It’s a good idea to stay near your commander during the battle but leaving enough space for fighting. Also, shoot when required making an effort not to fire first. Instead, have the team members confirm the plan before aiming at the enemy.
• Always use the smoke as a distraction in times of intense battle. This will drive away from the opponents and provide you with ample time to execute your battle tactics.