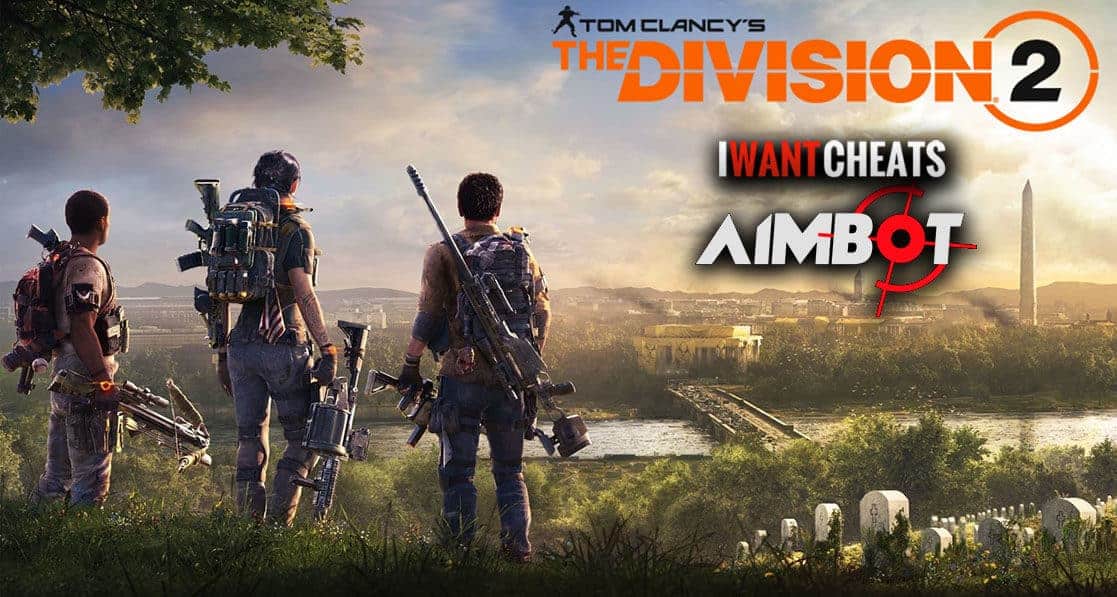 Check out the video below to see cheats in action and look at our exclusive feature “Killing Through Walls” no other cheat site has this amazing feature online.

Check out the 40+ features we have listed below for any TD2 Hack you download and join us now to instantly start using this amazing cheats!

Don’t forget to check out our CSGO Cheat and the new Modern Warfare Hack.

We only make PC cheats here for The Division 2 but we do know how you can use cheats on TD2 with consoles, so let’s get that out of the way.

To use The Division 2 PS4 Cheats or Xbox One Cheats you need to get a device called the Xim Apex. Once you have the device it connects to the console via the USB port. 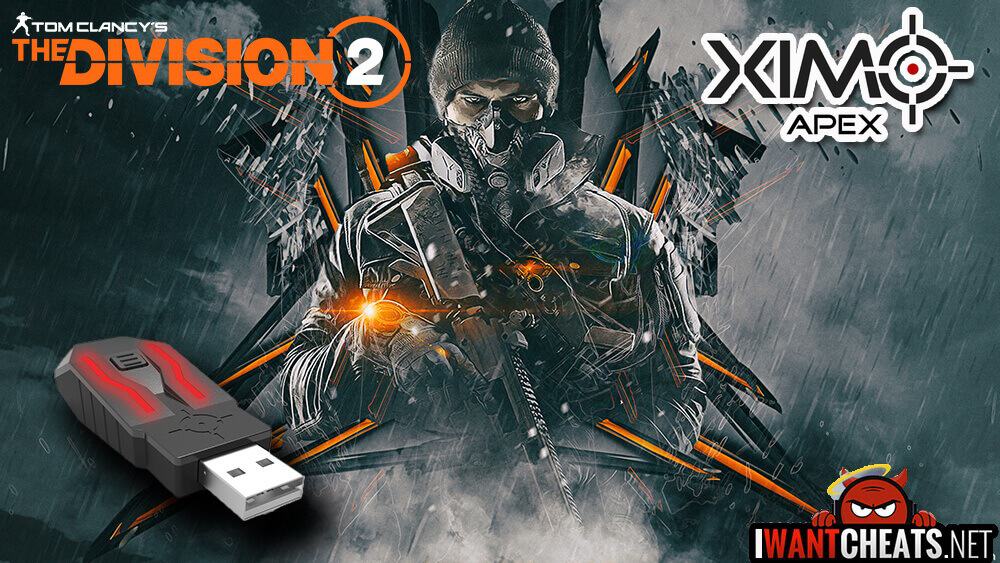 Is The Division 2 Cheat Easy to Use?

Yes, this is the easiest cheat to use, once you start The Division 2 Cheat you start the game and the menu will appear at the main menu.

You can enable and disable any part of the cheat menu in-game or anytime you like.

Game cheats even allow for custom colors so you can totally customize the entire cheat to your liking.

Check out this screengrab showing off the cheat menu. If you love TD2 check out the new EFT hack we have online that remains undetected. 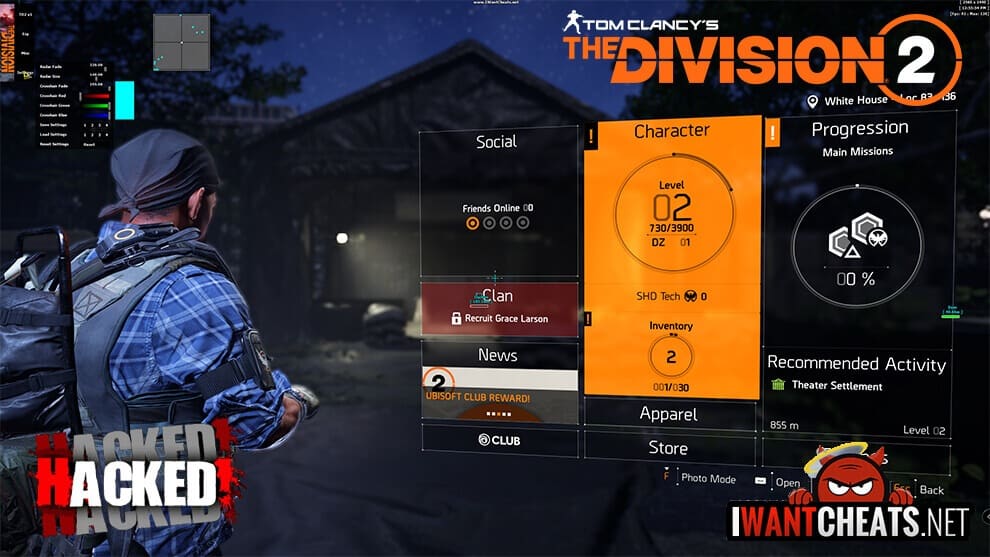 Do You Have a Division 2 Aimbot?

You can get an aimbot and some sites have the best Division 2 Aimbot in the world! The video we uploaded above shows how you can kill through walls and other objects.

An amazing feature is Silent aim for the aimbot so you never have to keep your weapon locked on the enemy.

Most products have over 40 amazing features for The Division 2 Cheats check them all out! This hack is almost as good as our Warzone cheat for COD. 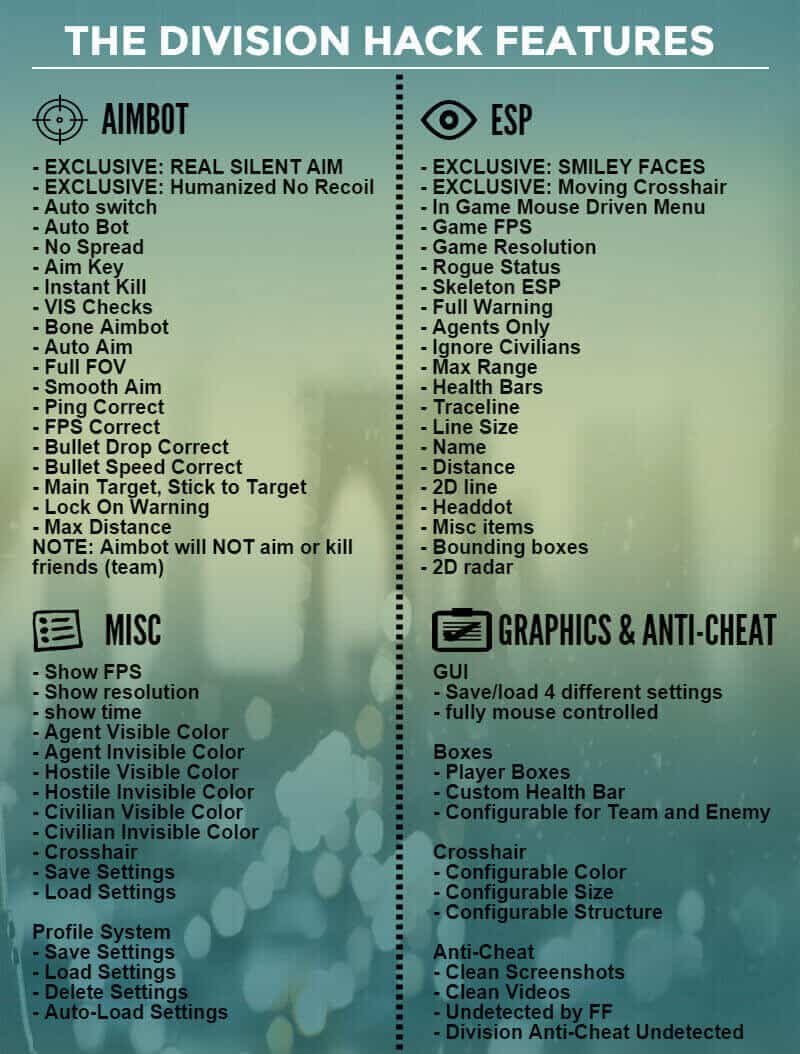 Are The Division 2 Cheats Undetected?

Yes, Division 2 Cheats are currently undetected and if we see any type of bans we tell coders to take it offline, fix the issue, and upload a new build ASAP.

Coders will also give everyone time back for any downtime.

So sign up now and get Division 2 Cheats to win and own the city! Don’t forget to check out the undetected Black Ops Cold War hack we have online if you enjoy TD2!

Check Out Our Division 2 Review

The Division 2 Review – A Classic Take on Immersive Shooter
I was highly impressed by the thrilling gameplay and fantastic features of the much-hyped multiplayer survival epic titled ‘The Division 2’ crafted by Massive Entertainment.

As soon as I got hold of the Beta, I jumped to start playing. What hit me first was the eye-catching visual effects and graphics. Developers incorporated these in the gripping backdrop using high-quality graphics technology and the best gaming engine.

The game is set for March 15 timeline, but I have the private beta version announced in Ubisoft’s E3 2018 press conference for an early play-check. The visual effects of technology play a significant role in uplifting the overall experience backed by intense, action-packed sequences and interesting modes along with new campaigns.

Massive Entertainment concerted with Red Storm Entertainment to design The Division 2. If you are a fan of action role-playing video games, then you should definitely play it.

The Division 2 is set to be available for Microsoft Windows, Xbox One, and PlayStation 4 users. It comes equipped with a variety of fascinating features that reflect the wow-worthy co-op shared-world role-playing title, The Division. 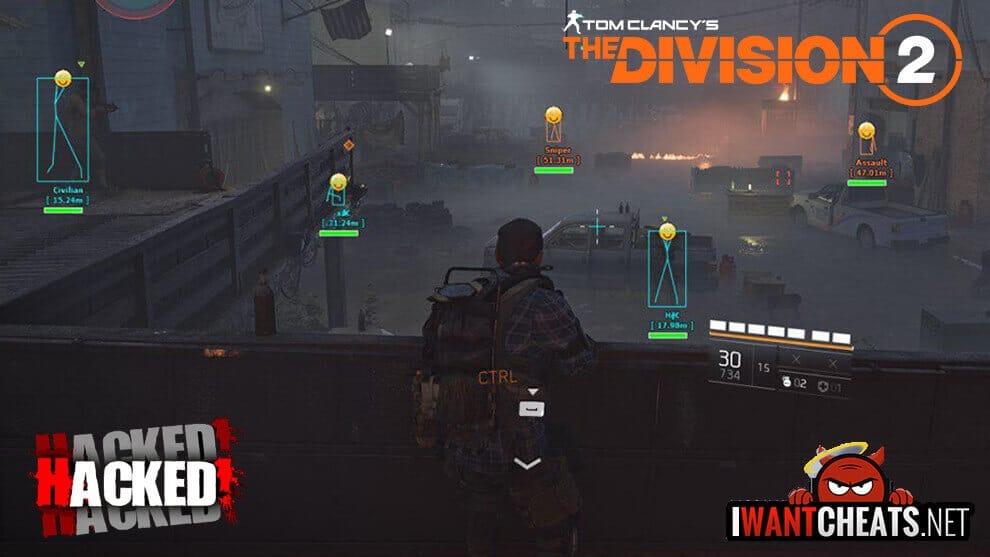 This Massive Entertainment’s multiplayer game had the fans swooning over and pining for replays.

The plot buys heavily from the prequel and primarily consists of a national task force assigned to initiate civil administration and restore peace, law & order in Washington DC that is currently being hampered by rogues and rebel groups from different areas.

While Tom Clancy’s The Division storyline had the same taskforce deployed to control the situation in New York City after an outbreak of the pandemic flu virus that sparked civil unrest and rebellion, The Division 2 is set in the capital state of Washington.

Our First Impression
The Division 2’s primary highlight is the exciting set of PvP, PvE, and role-playing features that are typical of most top quality online multiplayer shooter games. These will instantly catch your fancy.

The developers have made use of the Snowdrop engine to design the gripping action sequences, backdrop scenarios, and campaign modes including avatars for The Division 2 and other character classes. With this high-end engine, the plot takes a more realistic and attention-grabbing vibe.

The dominant characters and appearances make you want to try out the initial levels at the very first go. The developers have taken various attributes from The Division. These include the national task force, character classes, and the dark zone.

You will also get to enjoy a wholly redesigned endgame mode as well as immersive new content for the campaign modes.

Plot & Storyline
The essence of this third-person shooter’s plot remains almost the same but with an exciting twist to the story as it unfolds in phases. As I started with the opening sequence, I was pleased to see character customization features. 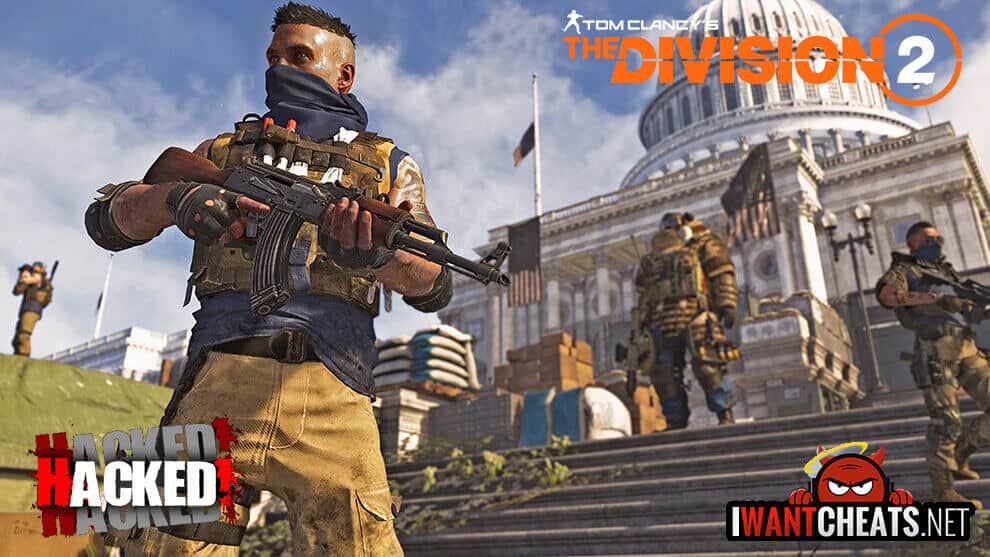 The plot includes, as highlighted earlier, the Division taskforce deployed to manage affairs of Washington DC State. The matters are in the wrong order due to the insurgent groups and civil society protesters aiming for the State Controlling slot for their own ad-hoc benefits.

The government has now implemented Directive 51 and tasked the Division to set law & order in shape and get things under control by taking over the state in disarray.

The civil disorder has resulted due to the Winter New York’s Dollar Flu events, following into other states including Washington DC. Now, it is up to the national task force to fight insurgent groups and rebel flanks to fix civil structure after seven months of disputes and civil riots.

You have the option of choosing either the Division or rebel group. Fight as a national task force member, an outlaw or a leader of a rebel group. Your core responsibility as a member of the Division is to battle it out with these mercenary groups and revolutionary fighters who have sparked most of the civil unrest and social destruction.

You need to collaborate with your task force teammates to hunt down their hideouts, find out resident settlements throughout the beleaguered state, and reshape the social structure dynamics to restore peace & administration.

You can also join one of the rebel groups managed by former Joint Task Force member, Antwon Ridgeway, and military squads like True Sons, etc.

To fight these tough opponents, you have to be more vigilant, prehensile, patient, and skillful at foiling any attempts of ambush or attacks. For example, the Black Tusks are like the gritty LMB in Division 1 with an AI like the hunter and battling maneuvers like diving for cover when sensing an attack from your end.

In a place where social structure is deeply in need of a fix, the division is key to reconstructing the social order and implementing peace.

Game Modes & Features
The Division 2 boasts a modish blend of gameplay features, exciting, action-packed moments, and a gripping story that offers an entirely new third-person shooter experience. As is typical with most shooter titles, you will get to enjoy the vast repository of weapons & artillery.

These include a ballistic shield that triggers through an assault drone, hive, seeker mine, and chem launcher in addition to guns and explosives. The developers exclusively crafted these to induce more damage, shoot bullets & ammo with more intensity and hit your enemy with precise targeting.

Using the high-end weapons like light machine guns and shotguns, you have the ambit to shoot at your enemies accurately and inflict more damage to gain an instant edge and overpower them easily.

I was pleased to use the all New Progression System in The Division 2. It allows you to select from three new specializations giving you more flexibility to step up the abilities and competencies of your specific avatar. There is a classic new endgame with unique playing content.

It will have you hooked onto your screens for hours. It offers you ample moments with fresh and unique tasks even after you have finished off your primary campaign. With this eye-catching endgame, you get access to an array of features. These consist of progression systems, brand new challenges, fresh surprises & challenging quests, and gritty raids as a brand new feature.