Just like the previous game we have produced another amazing Titanfall 2 hack for the new game release.

Just start the hack and go into the game to see every player, Titan, and weapon clearly marked with amazing ESP visuals.

The hack allows you to see players behind walls and win every single round. 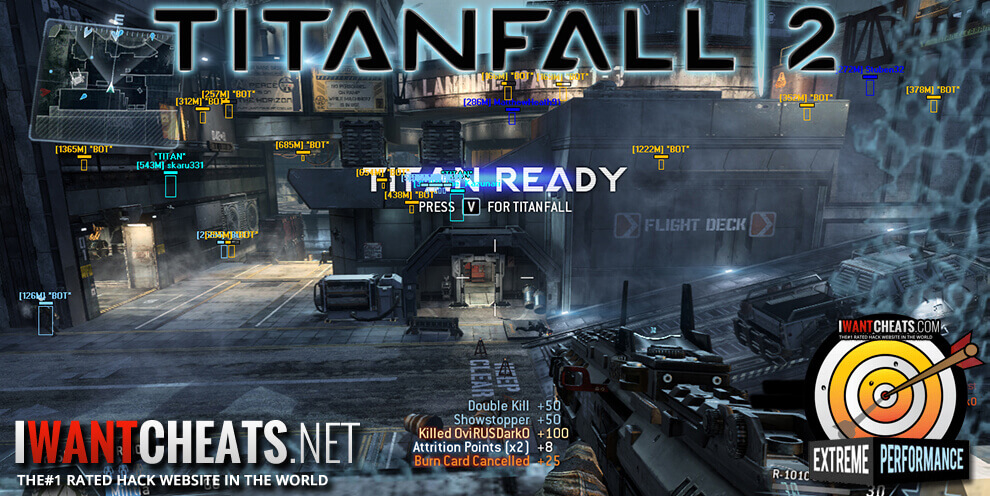 How safe are our Titanfall 2 Hacks?

Most hacks in Titanfall 2 will end up getting you banned and sent to the servers where only cheaters play.

Our Titanfall 2 hacks are coded so the anti-cheat won’t see you cheating and you’ll look like a legit player with incredible skills.

We never even had one ban in our previous Titanfall hack released a few years ago.

How does the Titanfall 2 Aimbot work?

When you go into the game, you can set up the aimbot to work with your mouse or any key on the keyboard.

When a player isn’t behind a wall and can be hit the ESP box turns green, just press the aimbot key, and the weapon locks onto the player.

The Titanfall 2 aimbot will take the enemy down even when you walk on walls or jump through the air, and it works with normal players and when you get inside a Titan.

You can also see every player using the wallhack, this allows you to see glowing ESP behind any object or wall and pre-plan any attack. 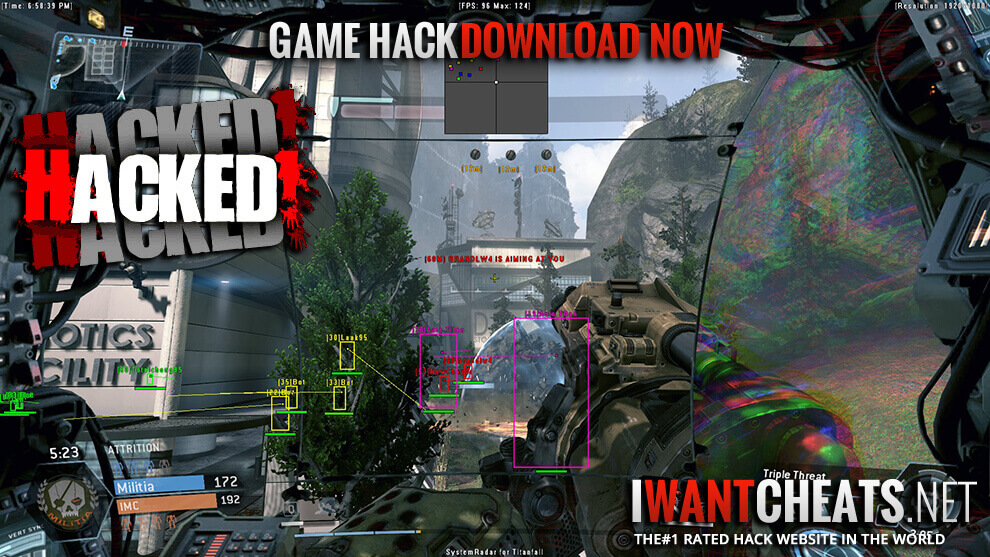 The whole process takes about five minutes to set up, simply follow the directions below and you’ll be cheating in no time.

1) First download a copy of Titanfall 2
2) Register on our forum
3) Subscribe to the Titanfall 2 hack
4) Head over to the VIP forums, that’s it!

Developed by Respawn Entertainment, Titanfall 2 is an upcoming first-person shooter game similar to its predecessor Titanfall.

Titanfall 2 will release Worldwide in October 2016 on Microsoft Windows, Xbox One, and PlayStation 4.

As a protagonist, you need to team up with a veteran Vanguard-class Titan named BT-7274. Work together against the overwhelming odds to sustain a mission, which he was not supposed to do.

The storyline depicts the pilot-titan bond showing the personalities of Titans. 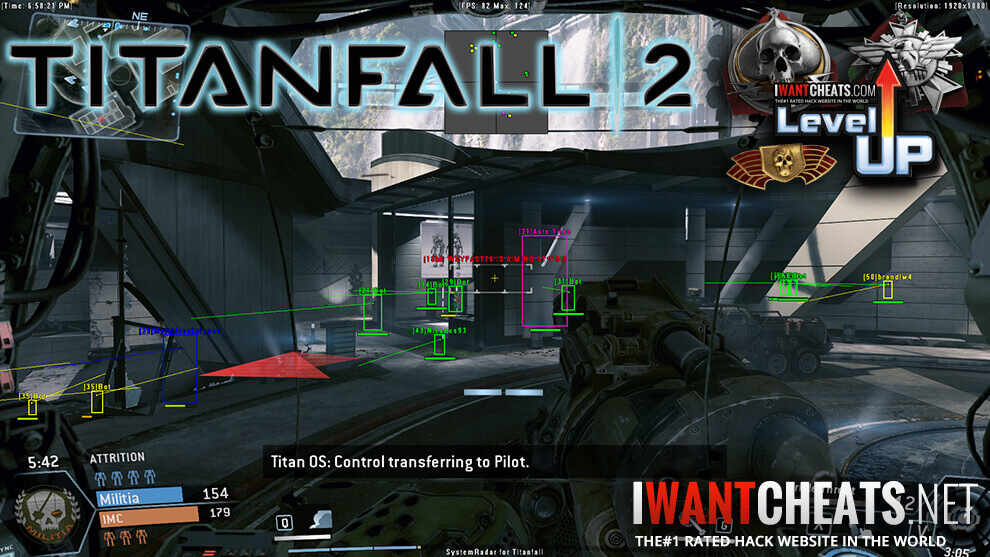 Titanfall 2 Gameplay
Just like the Titanfall, it is also a first-person shooter to control both the Titans and pilot, mech-style exoskeletons.

The pilot contains some abilities that enhance efficiency during the fight. The skills include parkouring and invisibility cloakings such as zip-lining, wall-running, and double-jumping using the boost pack.

The movements can be combined to travel quickly between locations.

The parkour pace is slower than the Titanfall version 1, making it accessible to new players. Matches are predictable giving players enough time to react to surroundings.

There will be seven new features, some of which are as follows:
● Sliding mechanic
● The pulse blade (Throwing knife to reveal the nearby enemy location)
● Holo-pilot
● Holographic pilot to copy players’ action to confuse enemies
● Grapple Hook (To attach players to a building or to hook with an enemy)

Similar to the previous version, the game features a progressive system. It also includes more weapons and gives options to customize them.

Executing an enemy, the perspective shifts to third-person automatically. Players need to collect enough points to summon a Titan.

A Titan then descends from the sky. Titans are slower than pilots but have stronger and powerful firearms.

The game includes the same models as was available in Titanfall with the introduction of six new Titan types.

● Scorch: Titan class with a loadout centered around incendiary weaponry
● Ion: Titan which kills enemies through a direct-energy arsenal
● Ronin: Titan which is an expert in close-combats
● Legion: Titan class designed for control and defense
● Tone: Titan focusing on lock-on weapons
● Northstar: Titan class excellent in precision attacks to set traps with a flying ability 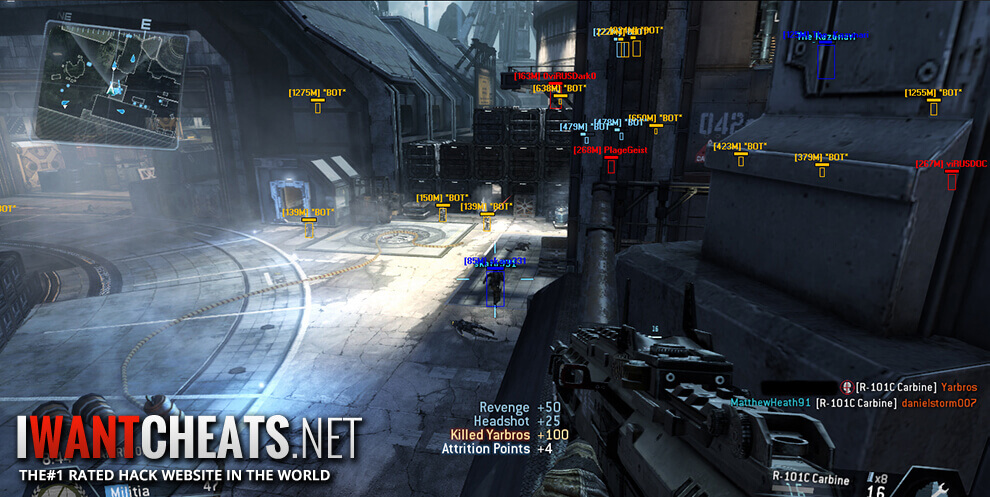 The available customization options are similar to the Street Fighter franchise but offer Titans all the abilities to have little modifications using extensively customized appearances. There are also AI allies and enemies in some multiplayer gaming modes.

The single-player mode is about a linear story with open-ended arenas offering multiple exploration paths to you. You are allowed to use multiple ways to complete objectives such as using stealth and the long or short-ranged weapons provided in the game for assaulting enemies.
The game also features platform elements giving players a chance to solve environmental puzzles and get to the inaccessible areas. It also includes level-specific weapons to be used in different regions.

The game uses an improved skill system in which the players are rated based on their performance in a multiplayer match. Matchmaking enhances the gameplay automatically by helping players in finding a new match at the end of each game. There is a new feature called “Networks” allowing players to form a group similar to the guild. The game groups both the player and other members of the network together in a match. As a player, you are free to join multiple networks. 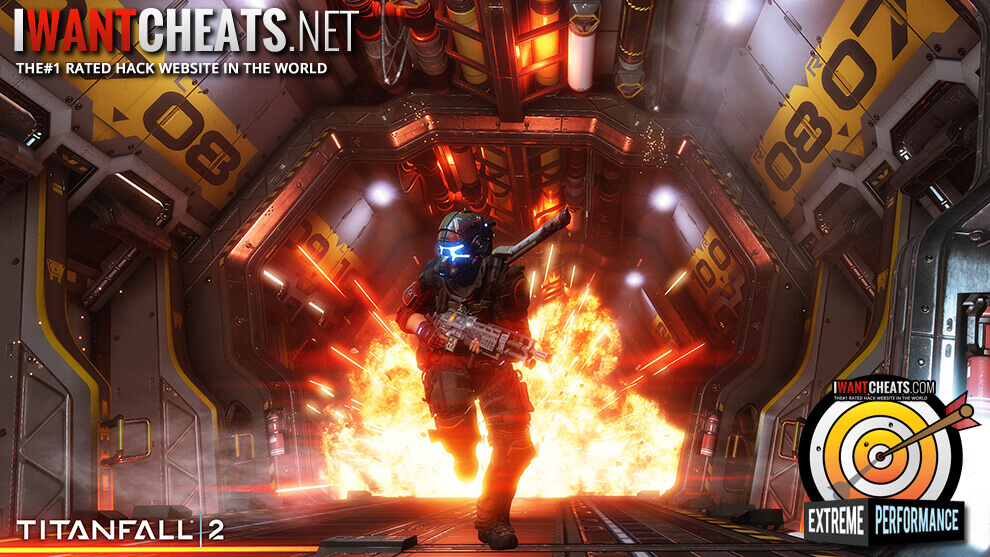 Game Highlights
Provides a Lot of fun
Titanfall 2 offers a lot of fun. The scientific test ensures the fun nature of the game. It is different from the original Titanfall but still includes substantial changes. It includes modes without bots to put against the other pilots and take the challenge up a notch. Get a hold of any map and the method combination to have a lot of fun.

Challenging Game Requirements
The fine layer is extended to make sure you play against a lot of Titanfall veterans at a certain point. From fighting with a mad Titan, dodging a barrage of bullets with a grappling hook through an open window, taking yourself to a big wad of cash to the bank in Bounty Hunt, you will experience everything!

Boosts
Titanfall 2 has ditched the Burn Cards and introduced Boosts. Though Burn Cards aren’t liked, they did have their perks rendering players more customization and variety between matches. On the other hand, Boosts give you a slight edge in killing enemies and fulfilling the objectives. Amped Guns (amplifies the damage of your weapons) and Ticks (spider bots that chase enemies and blow them up) are the two boosts. You can pick one as per your objective.

Grappling Hook
Grappling hooks are the most vital change that complements well with the overall stress on swift and rhythmic movement. It improves flow and gives you an edge over other players who don’t have it. Also, Hook is perfect to oppose any Titan and fight them. 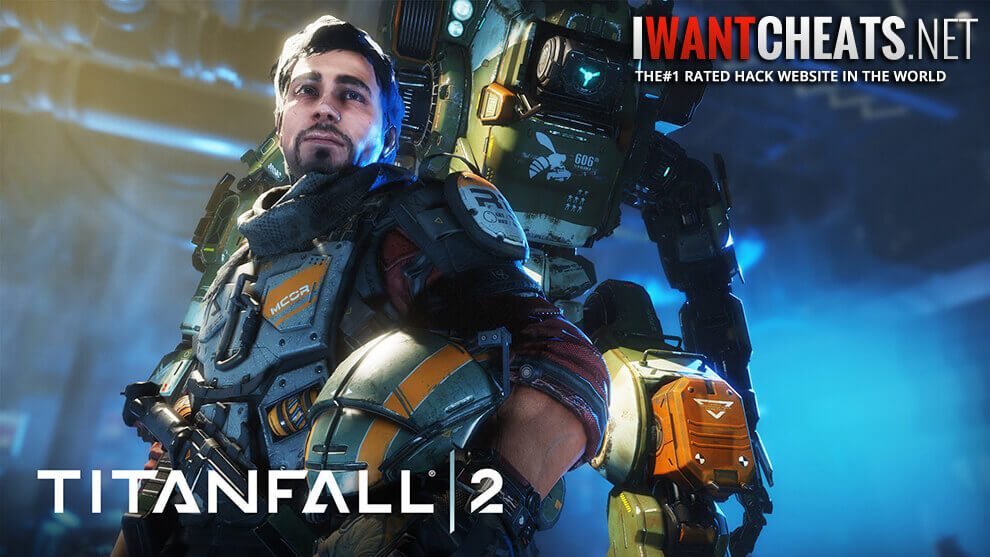 3 Great Game Modes
The game trailer shares only three modes in the Tech test. Bounty Hunt is about taking the multiple AI bots to deposit bounties in a race to check which team earns the most. Amped Hardpoint is a twisted version of capturing A/B/C points, which you can enhance to earn extra points. Pilot vs. Pilots is a titan free mode. All three-modes are fun, but the addition of each bot as an option in these modes is not a bad thing.

Benefits With a Rewarding Titan Performance
Titanfall 2 doesn’t feature a Titan Timer. Not waiting long enough earned you Titan in the predecessor. However, in this version, you will need to enhance your performance. You will only achieve the Titan rank by achieving the game’s objectives and killing the enemies; this also means you get rewards for your excellent performance. However, since the Titans go down due to a lack of recharging shields, the map stays scarce.

The Scoring System
Similar to Overwatch, awards given on Defense points, Assault points, and the number of killings, this takes the sting out of the dying lot, making it hard for the prickly teammates to single out the under-achievers. The scoring system is not very challenging for expert players. However, it does offer a great chance to new and casual players to keep the player base big and healthy for the active players.

Game Graphics
The game features modern-day graphics. According to Mackey McCandlish, the game’s designer, it does not include any significant grinding element. The graphics are similar to other gaming series such as Wolfenstein and the Doom series. You can also talk to the Titan during the game campaign; this is another new feature of the game which adds personality and depth to the characters.

Titanfall cheats and hacks have been released and are ready for you to use! If you haven’t heard of Titanfall then you need to watch the video I posted below so you can see how amazing the game looks. Basically you will be playing a new and advanced first-person shooter where you can call in the titan; a huge robot you can jump inside of and kill everyone around you.

That’s not the only killer aspect of the game, all the players can climb around on the side of buildings and make for some serious killing action. R4Z8R is working on the Titanfall hacks and we released them just a few short hours after the game was released to the public. I posted more information on the game below as well as our first Titanfall cheats video release.

Titanfall puts killer robots in your control, check out the new Ogre Titan below and see how you can smash the competition in the game. I actually got to see this game in action at E3 and it’s simply amazing, the creators of the Call of Duty series games worked on it and have kept it secret for over 3 years. I believe it will end up being the best FPS game for 2014. To help players rank up fast we will have out Titanfall cheats with full aimbot released shortly after the game goes live.

Titanfall 2 Verdict
Titanfall 2 is beautiful, but not good enough to make it as interesting and exciting as the original Titanfall. You will experience a lot of fun playing the Titanfall 2 Tech Test. However, it will not be something extraordinary. Besides, the single-player campaign is expected to offer a lot of fun. The multiplayer mode will still play an active role in engaging a loyal player base.

The game would fix a few technical issues before the final launch. It is challenging, fast, and fun, but misses a few landmarks such as better maps and Attrition. The game may add more maps to the already available for Titanfall 2 Tech Test. It can be a great hit if it manages to appeal to the hardcore fans of Titanfall. Our Titanfall 2 hack will help you win every round and have more fun playing the game so sign up now.